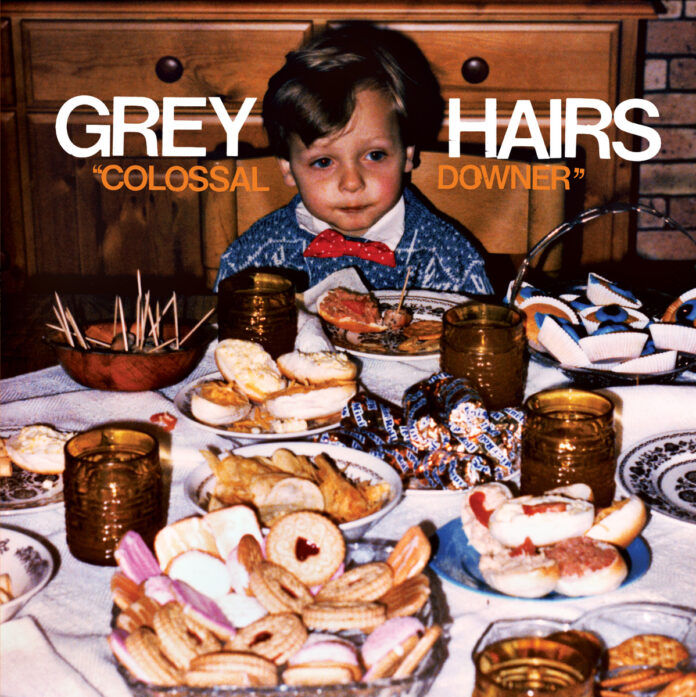 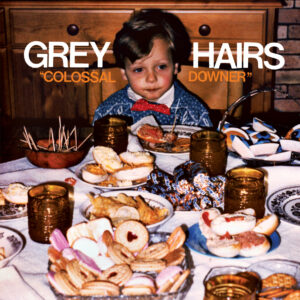 Featuring members of UK underground bands as diverse and respected as Lords, Fists, Cult Of Dom Keller, Fonda 500 and Kogumaza, come Nottingham’s Grey Hairs, a band who regularly get compared to TAD, Jesus Lizard and The Sonics. For Louder Than War, Stephen Murphy reviews their debut album.

Nottingham’s Grey Hairs are a living testament to Dylan Thomas’s notion that “old age should burn and rave at the close of day”, and whilst the band aren’t quite ready for the knackers yard just yet, with every passing year, they seem to be becoming louder, faster and a bit louder again. Grey Hairs are clearly one collective of slightly older folks who certainly aren’t going to (and I’m paraphrasing Thomas somewhat here) piss off to the next world without a creating a big fucking noisy ruckus first.

With a band membership that overlaps with a multitude of other great and good Nottingham groups including Fists, Bus Stop Madonnas and Kogumaza, it’s a wonder Grey Hairs have actually had time to sleep/eat/shit, let alone record anything. They have though, ranging from their 2013 eponymous debut 7” single, last years rather special collection of Harry Nilsson covers – Grey Hairs Schmey Hairs, and now their debut album – Colossal Downer.

LP opener, Ship, is a big dirty blast of discordant feedback and atonal guitars, and is perhaps the greatest musical analogue to being messed up on Special Brew ever recorded. Each woozy riff is another sip from the can, and by the songs end, you will feel like you need a little lie down and a couple of aspirin. Truly a work of depraved genius.

The sense of boozy/chemical dislocation from the real world continues with Creepy and The Hedgehider, with the latter having a bass line that stalks you with seemingly murderous intent, then tries to loosen your fragile grip on reality with some almost subliminal sci-fi guitar effect/synth wibblings. Listen at your own peril if you value your mental health. Seriously.

Its not all songs that make you feel drunk or frightened though; Colossal Downer also has plenty of moments of light amongst its shade. Jesco punctuates its thunderously rolling gait with stabs of joyous Dick Dale surf guitars, and Dave’s Van sounds like the delicious love child of Sonic Youth and The Cramps. It’s perhaps though the towering might of The Handpisser, that places Grey Hairs in the premiership of crazed, hilarious, noisy bastards. Opening with tribal drums and some almost Native American whooping n’ hollering from singer James, the song quickly turns into a Mudhoney-esque tale of either pissing on your own hands, or some dirty bugger pissing on them for you. Either way, its unadulterated brilliance that should be played on radio 2, on the hour, every hour.

It’s clear, that with the sonic weaponry displayed on Colossal Downer, Grey Hairs have created an album that’s really rather special. A noisy, howling beast, that not only tells tales of getting widdle on your hands and, er, hiding in hedges, but also rather gloriously throws down to gauntlet to younger bands to try and go one better. Grey Hairs aren’t just raging against the dying of the light, they’re flicking V’s at oncoming decrepitude and mooning the notion that anyone over the age of thirty five is a bit crap. Long may it continue.

Colossal Downer can bought from gringorecords.limitedrun.com.