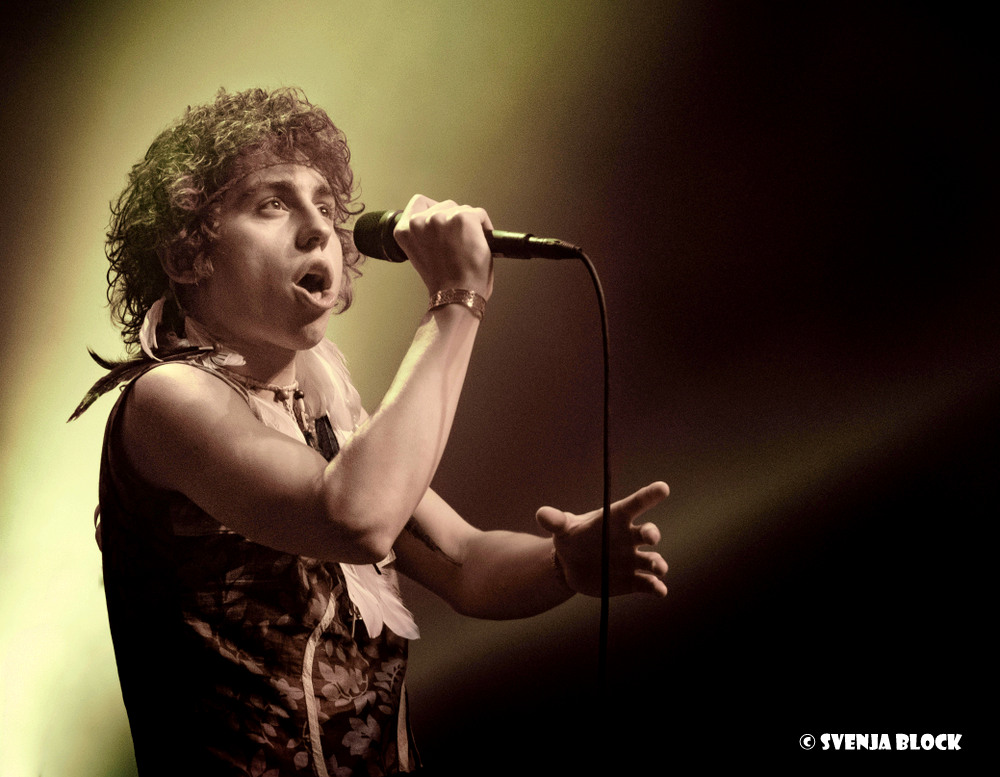 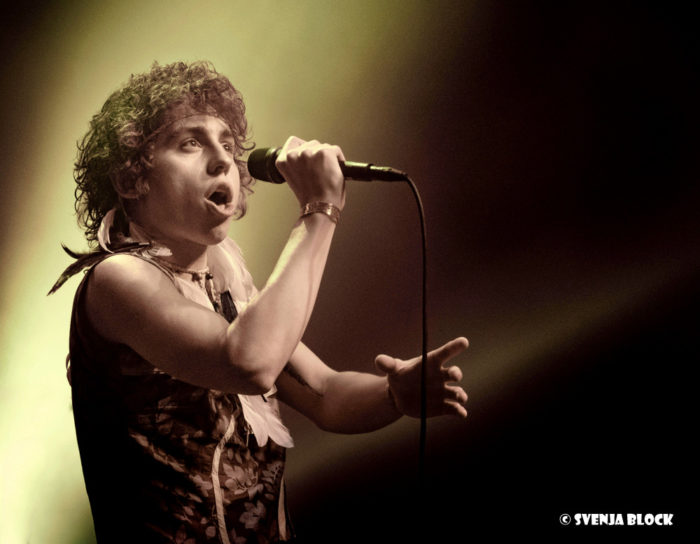 Do you believe in fairy tales? Do you believe in the possible existence of a time machine?  This is what Louder Than War’s Kristiina Treganna Malinen felt like after witnessing an absolutely breath taking show last Sunday by Greta Van Fleet at the Forum in Kentish Town: ”I have to say I almost do. I saw two fantastic rock bands that  could have both been dropped here straight from the seventies!”

The main act being Greta Van Fleet, a very young four piece from Michigan USA, consisting of the three Kitszka brothers, Josh, Jake and Sam (aged 22,22 and 19) and their friend Danny, 19 as well, on drums. They seem to have materialized from total nothingness almost overnight. They were signed by Lava Records in March 2017 and their first EP “Black Smoke Rising” came out merely a month later. Their debut single, ‘Highway Tune’ topped the Billboard US Mainstream Rock and Active Rock charts in September 2017 for four weeks in a row. 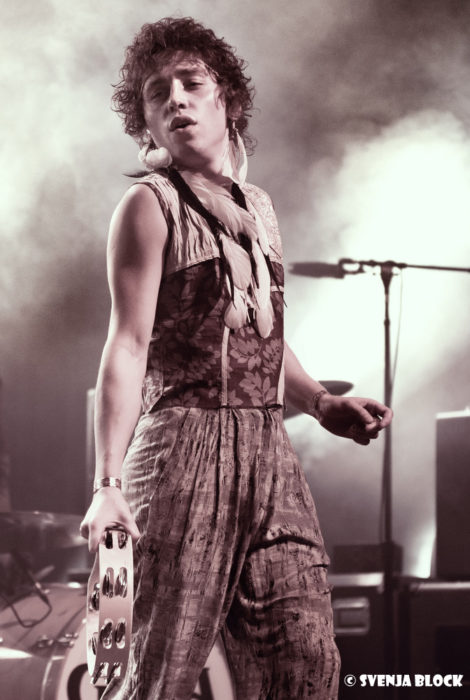 The debut EP was soon followed by the second one,  ‘From The Fires’. It contained four songs from Black Smoke Rising and four new songs, and was released  10 Nov 2017, alongside a second single, ‘Safari Song’. Their debut full length studio album, ‘Anthem Of The Peaceful Army’, was released on October 19, 2018 and it topped the Billboard Rock Album charts in the first week after its release.

So basically, the word has only known about Greta Van Fleet for a year and a half. Yet today their music video of the debut single Highway Tune has almost 30 million views on YouTube, and the band is touring all around, selling out shows wherever they go, including their three night residency in London.

My anticipation before attending this gig was huge. There is this constant reference to huge classic rock icons like Led Zeppelin and The Who, which are of course bands I love dearly but sadly being born too late, I never got to see either play in a concert. And hearing their music beforehand. I admit I didn’t own the albums or know all of the song lyrics by memory when attending this gig, but maybe that is just the thing that makes its influence on me that tad bit special.

Arriving to the packed venue, I climbed up to the balcony and prepared myself for a treat.

The opening act I knew nothing about, just the name. Goodbye June. Another set of young Americans, this time from Tennessee. All looking like the very resemblance of Lynyrd Skynyrd, with their long brown curly hairs, their long legged thin bodies covered in skinny jeans- Jesus, I need to add the best legged guys always come from the States-  so totally looking the part.

From the first riff of the first tune, I thought they sounded it too. The two guitarists, Brandon Qualkenbush (rhythm guitar), and Tyler Baker (lead guitar) were an absolute joy to listen to, playing so well together, and the singer Landon Milbourn has that warm Southern rock charisma, and a great voice and stage presence. Funny enough, as Greta Van Fleet is a band consisting of brothers, these chaps are obviously cousins. The set they played was shortish, as it would be for an opening act, but Landon Milbourn advertised that the band was going to do a small venue gig of their own a few days later at the Black Heart in Camden, and I saved those words deep in my mind. I was going to go. Also on the shopping list now is their EP ‘Secrets In The Sunset’, that was published in the middle of their tour, a few days before the London shows.

Before Greta Van Fleet took to the stage some of my favourite music was played via The Forum’s speakers. Often the bands get to pick the music, so to my delight I found myself jamming to Wilson Pickett and some other soulful classics.

And then THE moment arrived.

The first chord of the first song, ‘Brave New World’, acted as a kind of an intro leadingus to the ever fantastic, already classic , ‘Highway Tune’. Yes, the guitars sounded massive. Yes, Josh Kitszka sounds like Robert Plant. Yes, I was almost pissing my pants in excitement and joy. Had to grab it on video, but that was the last time my mobile phone came out of my pocket that night. I let the music lead me to a trance like state. When the band was doing long instrumental breaks that sounded like jamming, it was so good I didn’t remember to miss the vocals at all. That kind of thing sometimes can feel boring at gigs, but this was so lively, so electric, so good, that it can be looked at this way, the measure of a really, really good band. This is what they are.

Greta Van Fleet may be young and some may say they are relying on traditions, cashing in on copying the sound from Zeppelin or whatever, but this is not all there is to them. 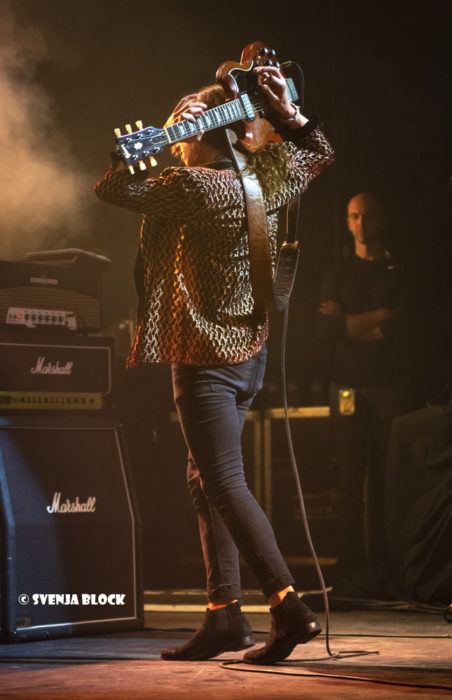 They bring rock´n´roll at its best back to life.

I enjoyed the whole set. After the strong beginning we heard ‘Edge Of Darkness’, ‘Flower Power’ and ‘You’re The One’ ( if I have to name one song I was not 100% fond of, this one would be it –  a number, I thought is a kind of one all bands “have to have”) , followed by some respectfully presented cover songs,’Evil’ from blues legend Howling Wolf, and ‘Lay Down (Candles In The Rain)’ originally recorded by Melanie.

‘Watching Over’ and ‘Curtain Falls’ ended the set and left the crowd howling for more. My body snapped from the trance for a moment, and to my total disbelief I saw a guy at a nearby table SLEEPING and wondered what trip he was on. I would kick myself to have slept through a gig like this one.

Encore: ‘Black Smoke Rising’, ‘Safari Song’, and the unbelievable drum solo by Danny Wagner got me catching my breath, unreal. Don’t want to say it out loud but Bonzo Bonham and Keith Moon (rest in peace) would both be very proud of this fine young man.

I’m unsure how much time passed, but I wish it would have gone on forever…

If you ever get the chance to see Greta Van Fleet, go and see them. And Goodbye June too, obviously.

So one day when you’ll be old and grey you can brag to your grandchildren, that will be hoping- yes- to jump into that time machine – to see Greta Van Fleet. I don´t need the time machine. Or fairy tale. The reality is sometimes better. 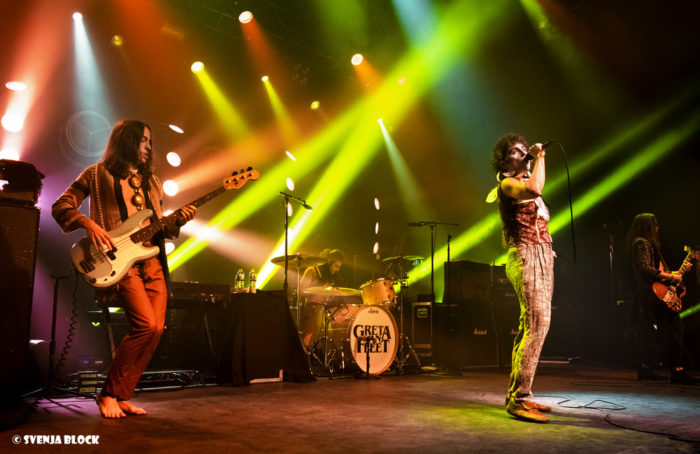 Greta Van Fleet’s album ‘Anthem Of The Peaceful Army’ is out now via Lava/Republic.

All words by Kristiina Treganna Malinen. More writing of Kristiina can be found at her Louder Than War’s author’s archive.

All photos © Svenja Block. You can find more of Svenja’s work at her Pixieset, Facebook and at her Louder Than War author’s archive.