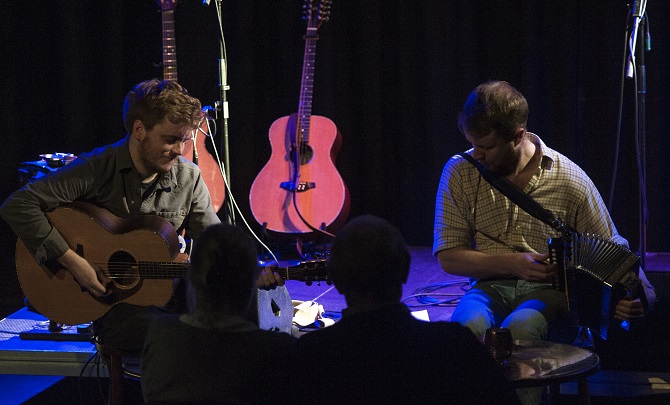 While it may be easy to confuse Rutter & Russell  and not just the names as their physical resemblance is uncanny especially under orange and blue stage lights. To add to matters, they’ve named their latest joint venture/tour as the ‘Ginger Beards and Tasty Beer’ tour. See the potential problem for faltering over words? All set to stumble is Mike Ainscoe, making the short trip to The Met. 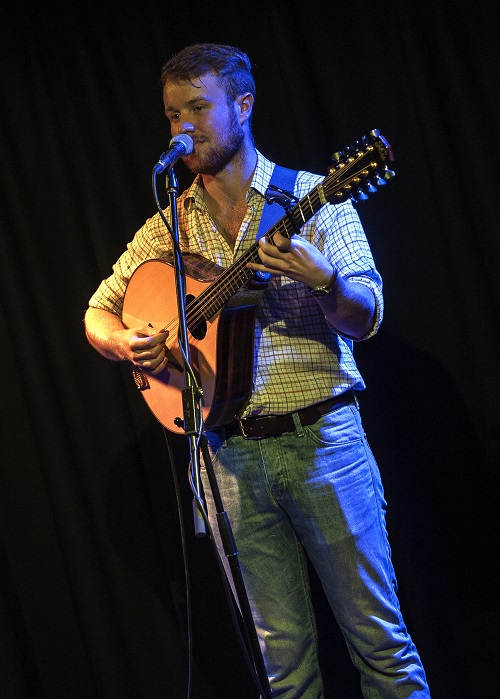 A set each and then a chance to do something as a duo at the end, what wasn’t there to enjoy as two of the leading young lights of folk music get the rare chance to do their own ‘thang’ after spending much of their time being part and parcel of several other projects. Having said  that, both have recently put out albums under their own names.

Let’s take Jack Rutter’s Hills to start with.  We reviewed it here and a debut album  that focussed strongly on traditional sources. It’s now established long enough to be able to showcase  the best from it along with taking the bold step of introducing something new into the set. It has to happen – new songs and arrangements can’t stay in the studio for ever and have to stand on their own.  Sledmere Poachers is one that on first hearing, is a keeper and one that with the usual tweaks as it becomes familiar, will be a set highlight.   Bold enough to to setp off mic and sing unaccompanied and unamplified – in the ‘traditional’ style – just the giveaway shape of a mobile phone in his pocket a reminder that we’re in the twenty first century.

There was a chance too for some worthy self promotional plugging as he’s also set for a  performance at Damien O’Kane’s Folk Prostate Cancer fundraiser  (news here) later this month. 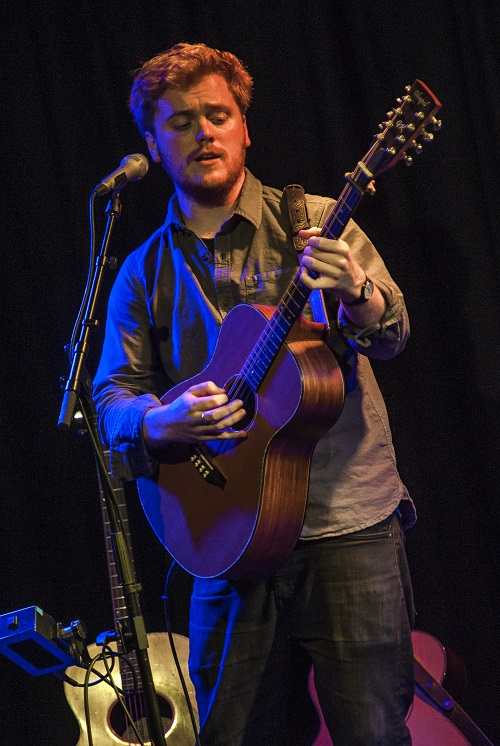 On the other hand, Greg Russell might have a more packed CV to his name, becoming ever the in demand musician. Aside from his main thrust of the long established partnership with Ciaran Algar (they’re back at The Met next year take note) he’s recently been available on the red button playing to forty odd thousand in Hyde Park with the Band Of Love – a folk disco outfit. Apt then that the old Gloria Gaynor chestnut I Will Survive was rolled out not quite in the style of but more in a revved up Jack Johnson groove. It was material from his last album with Ciaran that dominated the set along with what Ben Elton used to call “a bit o’ politics” from his Shake The Chains project.

And no, The Met’s legendary soundman Terry hadn’t pushed the faders up for Greg’s set – he just seemed to be naturally louder and full of the joys of having the rare chance to perform as a solo act; a rare opportunity these days with his hectic schedule as a travelling, Travelodge living, musician. Whether or not the ginger beards found any local tasty beer, or whether the tasty beards even found any ginger beer…that’s another matter.