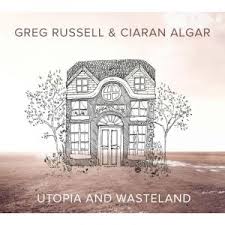 Laughing in the face of the gods of superstition, the folk duo of Russell & Algar brazenly cast out their third album, Utopia And Wasteland, on Friday the 13th.  And why not, with a shedload of awards behind them and escalating reputations to boot. Both their present and future seems to be not so much bright or orange as ginger.

The divergently titled Utopian And Wasteland is their third album that sees them back together after lengthy stints with fingers firmly wedged in other pies. Pies that have seen them growing in confidence and versatility as well as honing what is a seriously impressive craft for two young guys. Greg’s been a force as part of the Sheffield massif, accompanying Nancy Kerr in various guises while Ciaran seems to be much more than just a go to multi-instrumentalist or sideman for Dan Walsh Trio and Sam Kelly’s Lost Boys. Both have released solo albums while Greg has also led with what in the eighties, the Mrs Thatch bashing Ben Elton used to call ”a bit o’ politics” on the Shake The Chains project.

The varied musical palette conjured up by the duo on a combination of their own material and covers, finds them accompanied by producer Mark Tucker on percussion and bass as Line Two literally races in on a controversial tide that muses the spurious benefits of the HS2. Marks are set both musically and lyrically, that G&C aren’t going to be holding back, their buoyant confidence relayed on an ever increasing and frantic fiddle squeal. One that’s immediately tempered with some trademarl Algar fiddle tunes with a strong Irish flavouring.

Pondering a subject that raised its head on Greg’s Inclined To Be Red solo album, life on the road as a touring musician and the notion of home are addressed on Stan Roger’s Lock Keeper and his own Seven Hills; the former packed with emotion and sung and played with a rare longing, the latter a more considered collection of thoughts and questions accompanied by cool strings and a rhythmic patter.

Picking up on topical events, the Grenfell Tower sees Ciaran boldly stepping up to vocal duties and his view on the juxtaposition of wealth and poverty in Kensington and a powerful observation of too little too late – speculators might see the album title emerging from the ashes of the Grenfell fire. It prefaces a canny move or just lucky coincidence (more likely the latter, knowing the amount of time songs can take to evolve) that they’ve written a piece on the man whose current profile has even seen him featured on Sky Sports news, Walter Tull. The first black outfield player in the top division playing for Spurs and the first black officer to lead troops into battle in the Great War, he was killed in action in 1919 yet his story has resurfaced. A great opportunity for some marketing and getting their names out into a wider awareness – and we all know how much MOTD likes to tag itself into some funky music. And not afraid to acknowledge their roots, Greg leads a splendid All Fall Down and raises the topic of freedom and equality in adapting the Broadside Ballad, 1908.

Utopia And Wasteland is the mature work that we can now start to expect from the Russell & Algar combination. Russell the astute songwriter. Algar the ever evolving multi-instrumentalist and embellisher of songs. As a duo, they are steadily evolving into giants (let’s face it, Ciaran already has a head start) of the folk world.

You can hear Seven Hills from the album here: