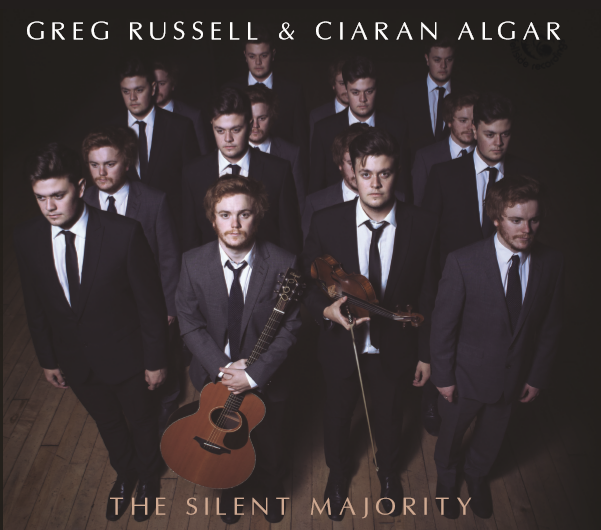 Surely the current holders of the title ‘bright young folk’;  their first album appearing while the pair were still at school. With Folk Awards and BBC Horizon Awards aplenty accompanying their onward journey via that difficult second album and an Algar solo venture, the duo all of a sudden find themselves arriving  at the milestone which is their third record.

It certainly finds the pair  on a roll – Ciaran Algar’s own debut solo album getting the thumbs up at the back end of 2015 not only  giving him a sharp injection of confidence that he has enough clout to go it alone and try something without his partner in crime but also in his own songwriting ability. And Greg Russell, no slouch either, working his way deep into the tradition to uncover material which has made its way onto ‘The Silent Majority’.

From ‘Prologue’ into the title track, all urgent fiddle – something vaguely familiar to Seth Lakman-ites, it’s an opening eight minute flurry which not only sets the scene but is a clear case of hitting hard at the start of the album. No hanging round to await  the best track at the end but straight in with a droning slow build and ominous message of the consequence of the reluctance of the silent majority.  All the way through to ‘Rolling Down The Ryburn’ which closes the album, on a more sombre and low key note, ‘The Silent Majority’ takes the duo on a journey through which is another step on the road to their becoming an notable part of the folk establishment.

Once again, they’ve collect songs,  interpret other songwriters material as well as doing the folk thing of embracing and adding their own spin on traditional material. There’s a variation on contemporary themes – the regular drinking and fighting weekend of the character George in his native Glasgow – and naturally the usual themes, the struggles of everyday working life,  found in traditional song. You can also now include Ciaran Alagar as a songwriter who has material himself to throw in for contention and his  solo composition ‘The Tide’,  a water themed fiddle air which he’s described as his attempt at film music, or alternatively, a piece of music to bathe by. The pairing of ‘Limbo’ and ‘Brisk Young Man’ see the duo contrasting their interpretation of traditional song. The former, taking its name from the debtor’s prison in London, is  more akin to all out  band effort, the chiming bouzouki edging it towards possibly being  the pick of the album, while ‘Brisk Young Man’ comes over as a much more melancholic, some may say miserable, song after the usual tinkering with tunes and words.

Aside their obvious connection as a duo, inviting a handful of guest musicians adds a sprinkling of colour and occasional depth to the record. Laurence Blackadder’s double bass and Tom Wright’s percussion provide the depth and the drive when necessary while fellow folk award winner Hannah Martin adds vocals on three songs. The colour comes courtesy of Ali Levack’s pipes which make their most significant contribution to ‘Did You Like The Battle, Sir?’ and in the ‘Swipe Right’ tune set, the first of two tunes sets which flit in and out of jigs, chamber  and Celtic themes.  Nonetheless it remains the Russell/Algar partnership at the core. A pair who are so obviously tuned into one another – great musical mates and a potent combination which is set to run and run.

You can find the Russell & Algar website at: https://www.russellalgar.co.uk/

Words by Mike Ainscoe. You can find more of Mike’s writing on Louder Than War at his author’s archive and his website is www.michaelainscoephotography.co.uk.