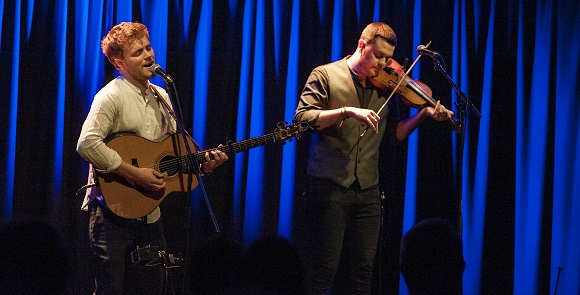 Folk duo whose early days accolades from being bright young folk are bearing fruit as they add experience to an alarmingly adept sense of musicianship.

But it might have been considered as much  a combination of  fashion show and stand up banter as music gig. Fortunately not a ‘ball(s) out’ /Inbetweeners style revelation , but one that saw Greg sporting a smart  blue linen suit – possibly the one from the cover of The Silent Majority and if so, good to see it still fits and is still in good use – and causing an alleged trip to the local fashion emporium for his partner to keep up with the air of sophistication. Not only looking good, but when they walk out and launch into a flying set of tunes with the sort of vigour you’d expect as a finale to a show, you know you’re in for a treat.

Four albums as a duo they’re also well toned as a double act. Both take part in  what you might call extra curricular activities and have fingers in many musical pies, ones that see Greg Russell returning to The Met on a regular basis (things you can rely on – death, taxes and trips to Bury) although it was Ciaran’s first visit to actually play. It’s also a seasoned musical and personal relationship  that sees Greg playing the role of the sceptical and world weary beyond his years cynic (must come from living in Sheffield), with Ciaran working on improvised retorts.

They also do the full range: tunes both foot tappingly catchy and light and airy; traditional songs adapted for their own inimitable style and flair and original material that resonates with a contemporary swell – a prime example in Ciaran’s We Are Leaving inspired by the Grenfell Tower tragedy.

Adding that  personal spin to guitar and fiddle tunes and songs both original and inspired and written by those who’ve trodden a path before them in particular Cold Missouri Waters always sends a chill, in the words of Pete Coe, they’ll continue  to lead the itinerant lifestyle of the travelling musician. A notion that Greg also toyed with on his own solo work  and yes, they’ll  forever be  rolling down the Ryburn in the morning.