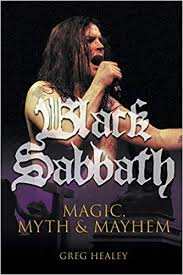 New book which takes the reader through the trials and tribulations of Heavy Metal trailblazers Black Sabbath. It’s written by Greg Healey, the man behind the excellent Not In Front Of The Children. LTW’s Ian Canty takes a trip to the dark side….

Nowadays Black Sabbath are afforded fitting respect to the glorious achievements of their initial incarnation. During that time they provided some of the building blocks for rock music in the UK and worldwide to such an extent it is difficult to think of a time before their influence came into play. The genre of heavy metal and its various sub-sections would be much the poorer without them and they are regularly praised and profiled in the monthly periodicals. They are much feted and acclaimed, seen as the ultimate standard by which others are judged.

But that wasn’t always the case, as this new book by Greg Healey contends. When these four ordinary lads from Aston first emerged into public consciousness with their self-titled debut album, their reception could not have been more different. Almost to a man (and it was practically all men in the music press at that point) the weekly music inkies condemned the band as provincial thickos, playing dopey, simplistic material for teenagers who hadn’t developed taste for “real” music yet. Sabbath had a few early supporters (including one John Peel, who gradually turned on them too), but that was the received wisdom in the early 1970s.

That view showed a total lack of understanding and often said more about the writers than the band. For instance, simple shouldn’t necessarily equate to being bad and also teenagers were presumably the people who brought the music press back the. So if Sabbath were “their” band, didn’t that mean the NME, Melody Maker etc had lost touch with what was happening? The constant criticism evidently stung the band though, something that would result in them moving away from their raw sound to something more sophisticated, a move that satisfied few. The irony is that those early Sabbath recordings are still the most fondly recalled and poured over by what remains of the music press.

Magic, Myth & Mayhem takes you on a concise journey through the band’s formative years, to the point when the wheels fell off the wagon at the time of Ozzy’s exit, onto the Ronnie James Dio years and up to the final gigs of 2017. Greg Healey is a great storyteller, zeroing in of the detail that the fans love whilst keeping the story breezy enough for the less committed. He always keeps in sight the fact that Black Sabbath were a group of working class blokes from the Midlands and this gave them that crucial bond with their fervent fans – it was as if four of the audience had climbed on stage and gave these early 70s kids a rallying point while the rest of the world bemoaned the fact the previous decade had gone. In effect the brutal, beautiful and basic thump of their music (think the crushing riffage of Iron Man) and their grass roots build up of a fanbase through ferocious gigging in the face of press indifference (at best) had parallels with punk five year later.

Theirs is a story whose elements would be played out over the years, elements that had their genesis from events that occurred during the various members’ upbringings and youth. Tony Iommi would emerge as the band’s chief creative force, an industrial injury he suffered playing a large part in developing Sabbath’s unique sound. However, his urge to be in control manifested itself before BS in bullying Ozzy at school. Later he would take a key part in practical jokes that went way beyond mere horseplay (part of the mayhem of the book’s title) – his tormenting of Bill Ward comes over here as particularly nasty.

He also saw Ozzy Osbourne as an easily replaced “instrument”, which demonstrated a total lack of understanding on his part of the band’s chemistry and appeal. Geezer Butler’s bass work set the tone for Black Sabbath’s doomy sound and his exploration of dark subject matter in the lyrics meant the band were seen by some as Satanists and subject to salacious press coverage. Which ironically also was a good dollop of their early appeal, but ultimately Iommi thought he could do without him too. Ward and Osbourne eventually bailed and Butler also took time out, meaning that Iommi was left the sole bloke from Aston in the many line-ups came and went.

There’s the traditional shady management dealings too, which meant that after years of success and most importantly sheer hard work, Black Sabbath were virtually penniless by the advent of punk. The latter and ironically soft rock, meant the band sounded hopelessly lost in the late 70s. From there on it was a hard road back. Ozzy left and Ronnie Dio came in and did well, boosting the recorded output and repositioning them as the forerunners of the NWOBHM (something that was gathering steam at the same time), but it wasn’t really the same. They had lost forever the myth of four ordinary blokes from Birmingham making something for themselves out of nothing.

Greg takes us through the myths and wisely offers a few versions before suggesting the most probable. With the passing of time since these incidents and the various players and witnesses probably under the influence whilst they were going on, it is the only real way. He’s adept and finding the band’s magic and also applies a critical, but never harsh, eye to their failings too. The mayhem is there for all to see and Greg does a great job in bottling the lightning and how it provided an outlet for Osbourne, seen as the band’s “class clown”. He also draws a convincing portrait of the times Black Sabbath grew up in and how this keyed into the seeds of both their success and destruction.

The early 1970s seem in hindsight a particularly grim time and perhaps ready for music that reflected this, but also provided some escape. Black Sabbath were ready, more than able to provide chilly morbid thrills in a Hammer Horror/Ghost Stories For Christmas way, allied monumentally tough but addictive music. Looking back they seem as essential part of the times as anything. In Magic, Myth & Mayhem Greg Healey tells their tale in an accessible, page turning style that drew this reader in. There is also a rundown of the album details and literary sources at the end for any further investigation you would wish to conduct. Don’t worry if you knew absolutely nothing about Black Sabbath beforehand – this book provides the perfect entry point.