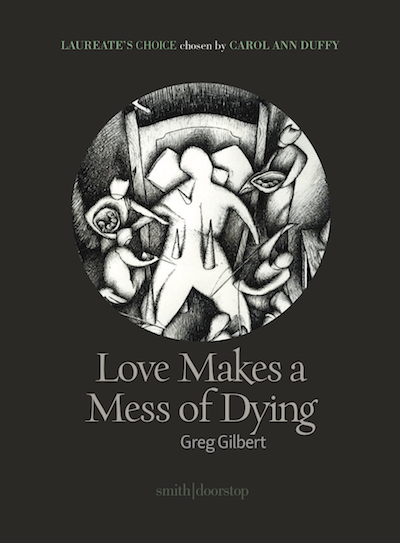 Greg Gilbert is singer/guitarist/frontman with Delays,  a band named after Southamptons most common traffic report – who remain arguably the coolest band to have ever emerged from the city. Since the news of his stage 4 cancer diagnosis broke just over two years ago, Greg has explored other art forms as part of his convalescence from ongoing cancer treatment.

An exhibition of his art – drawings and painting – will be on show at Southampton City Art Gallery from 1st Feb 2019.

And a selection of his poetry is being published after being selected by Carol Ann Duffy for the 2019 Laureate’s Choice Collection.   (Currently #1 on Amazon’s Hot New Releases in Poetry chart !)

Well deserved and a testament to his huge talent, which ironically seems to have branched off in other directions and bloomed due to his ill health.

The shittiest things happen to the nicest people.

Greg Gilbert to be frank was rubbish at being an old-fashioned excess-all-areas rock-star.  He never took drugs, barely drank, always had his head in a book.  And he sang like a girl. (“I take that as a compliment Ged”)

He was already a much-loved figure in Southampton and within the Noughties Indie scene because, basically, he and his band were thoroughly nice blokes.  His quiet determination to live with cancer, whilst the NHS help him beat the disease, lead to a huge response to the appeal for funds for potentially life-saving treatment the beleaguered NHS cannot provide.

The book (or pamphlet) of poetry I haven’t seen yet, but is described thus;

Examining the collision between tragedy and hope, Love Makes a Mess of Dying follows the struggle to make sense of the prognosis and treatment of a life-threatening disease whilst surrounded by the love and support of friends and family.

The search for the truth of an experience which seems to belie words gives Gilbert’s poetry urgency, eerie clear-sightedness, and a lush Keatsian lyricism.    – Sasha Dugdale

I know that the poems are going to be stunning, beautiful and painfully sad. It is, “Raw, honest and scared”, he told the Daily Echo.   There are two pieces of prose that Greg wrote which appear on his wife Stacey Heales blog ‘Beneath the Weather’:  Blue Draped Cube and There Are No Secrets Here – which show what a great, lyrical writer he is.

His art, some of which he has put on Facebook over the years range “from miniature, photorealistic biro studies drawn from photographs to equally intricate but surreal imaginings” on canvas.  I’m no art critic but they are vivid, livid and to me, scary. (The chemo-therapy dreamscapes perhaps only cancer-survivors find frightening  -others think they are just remarkable.)

This exhibition will feature a body of work, Convalescence, which was created in a great outpouring both in hospital and at home. Although all of the images arrived very naturally, they put the artist back in touch with primary influences of interwar artist such as Stanley Spencer, Paul Nash and David Jones, who processed their traumatic experiences through surreal narratives.

To accompany this presentation of his own works Gilbert will be selecting several drawings from Southampton’s permanent collection, featuring artists who have informed and resonate with his own practice.

Also on display will be a selection of the artists’ poetry, a selection of which has been chosen by Carol Ann Duffy to be one of her Laureates’ Choice publications. These poems further explore his illness but in a less abstract way creating a full, sensory diary of his experience.

There is an extremely good interview with Greg in Southampton local paper, the Daily Echo, by Sally Churchward who has covered his progress over the past two years, where he talks about his poetry and art, which I would urge you to read.  (Greg has even succeeded in bringing some proper journalism to a very dull newspaper – mentioning when-ever he can the Fight to Save the NHS.)

Fans of Delays music will have to be patient as far as music is concerned, but hopefully they can get something out of these other artistic outlets.

Whatever he turns his hand to, he is a simply a great artist: a gentle, immensely talented man.

Why do the shittiest things happen to the nicest people?  I don’t know, but sometimes, something of lasting value comes out of it…

Pre-Order/ Buy ‘Love Makes A Mess of Dying’ from here

All words, except where stated, Ged Babey for Louder Than War