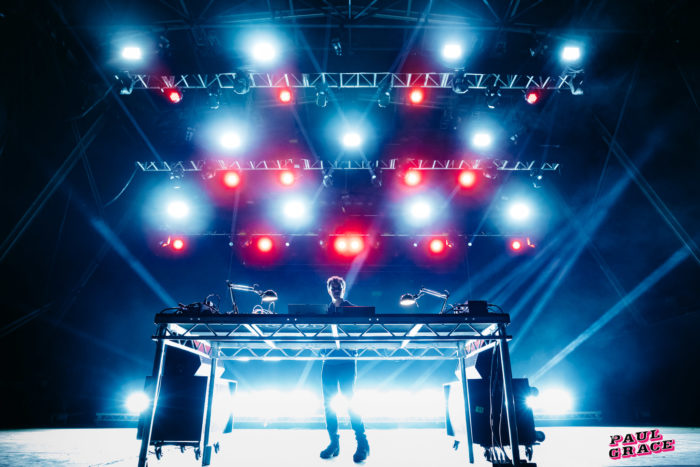 James Ayles takes a trip to the Brecon Beacons for Green Man Festival and is rewarded with a gathering crammed with diverse music, culture and community.

Entering its 17th year and boasting one of the most eclectic UK festival line-ups descending on the picturesque Glanusk Park in mid-Wales, it is little surprise that Green Man once again sold out in record time. 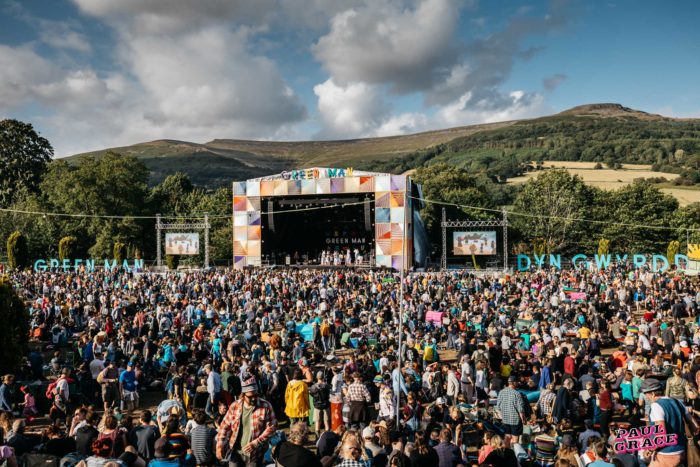 What is perhaps a little more surprising is the sheer diversity of the 20,000-strong revellers present; while the line-up appeals to the more discerning music fan and the event is one of the more gentle on the UK calendar, there were plenty of student-age attendees among the many children, families and Radio 4 listeners.

Another welcome trait Green Man has developed is the comforting familiarity with which certain acts return, and festival legend Pictish Trail was a natural choice to open the show for early arrivals at Walled Garden on Thursday. 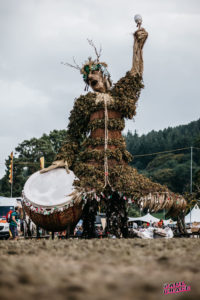 While the weather did its best to dampen spirits early on, it was particularly encouraging to see the schedule for Friday – and indeed every day – packed with an incredible array of emerging and established female artists across all genres.

Local favourite Gwenno pulled in a big crowd in the Far Out tent for her unique brand of Cornish and Welsh-language folk-pop bangers. For all the impenetrability of the lyrics, she brought plenty of character to the stage and finished by teaching the lyrics to rousing Cornish set-closer ‘Eus Keus?’ a highly relatable ode to cheese.

Marika Hackman, who this reviewer saw at this festival in 2014 as an introspective acoustic solo artist, demonstrated further the stunning transformation in her sound with a searing, energetic set on the same stage, backed by an all-female band.

While the music made a very encouraging start, it is when you look in all the other corners of this compact site that you begin to realise why Green Man thrives; the stalls covering everything from knife-throwing to candle-powered boats, cinema and the ‘Babbling Tongues’ tent. 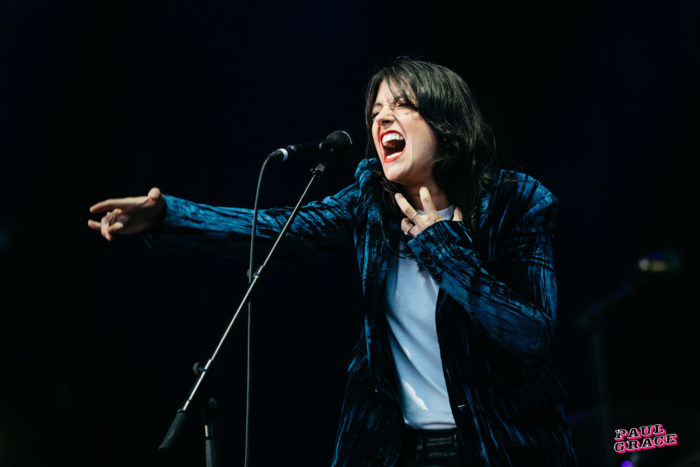 It was here that the inimitable Caitlin Moran delivered a profound yet very funny hour of reflection in conversation with Nadia Shireen to arguably the largest audience of the weekend. The best-selling author was full of pointed anecdotes and send-ups as she mused on her unique brand of feminism.

As the rain persisted and Friday evening set in, there was more unorthodox joy to be found in Stealing Sheep’s bonkers early-evening set at Walled Garden, combining smart stage routines, giant inflatables and irresistible hooks. The all-female three-piece from Liverpool are nearly a decade old, but their unique set-up remains fresh. 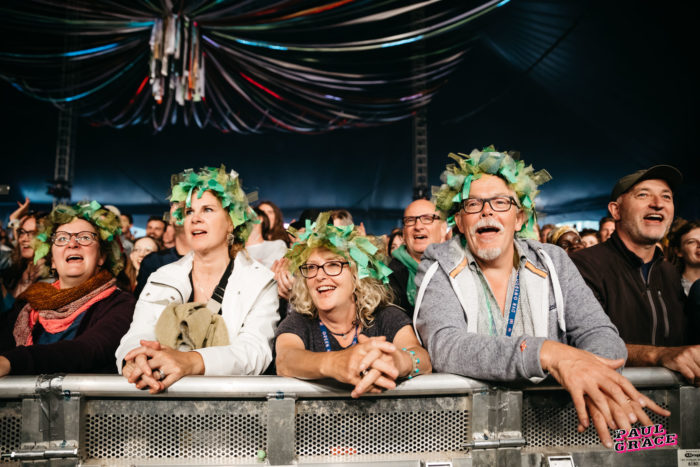 With many still hiding from the rain in the Far Out tent, Khruangbin brought their 1970s grooves to bear and bassist Laura Lee was, as usual, an utterly captivating stage presence dressed in frilly pink prom dress and with leather-clad guitarist Mark Speer and drummer Donald Johnson produced 75 minutes of funk splendour.

On Saturday, just half an hour after filling in on Far Out, Black Country New Road were back in their original spot on the Rising stage to deliver a punchy math-rock set that somehow avoided self-indulgence. The mix of genuine musical skill and shouty lyrics were not to everyone’s taste but second showing of the day was keenly lapped up by a strong hardcore following. 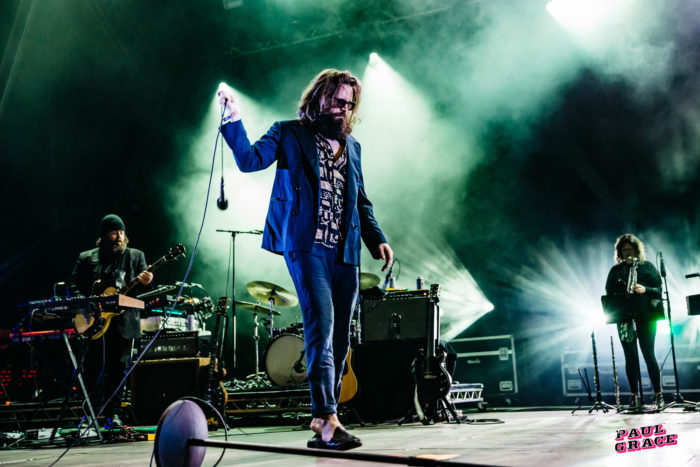 In the calm-before-the-storm afternoon slot on the Mountain Stage, Welsh-Australian Stella Donnelly showed plenty of poise as a sizeable crowd sought to make the most of the sun emerging tentatively from the clouds. It was, as the weather turned, that you could at least appreciate fully the jaw-dropping scenery that provides the backdrop to this festival, the Brecon Beacons rolling out for miles around.

Chai Wallahs, tucked away in a quiet corner of the park, was home to some of the weekends more eclectic acts.

Rioghnach Connolly, accompanied by guitarist Stuart McCallum in their guise as The Breath, wove songs of grief, pain and mythological monsters among whip-sharp stage talk, the Gaelic influence strong even without the flute-led instrumentals.

Closing the Mountain Stage on Saturday, Kieran Hebden, AKA Four Tet, delivered a scintillating live set quite literally illuminated by a brilliant AV and light show. His near 90-minute show dispelled any notion Green Man is a sedate affair, the electronica rolling off the hillsides and back down again. 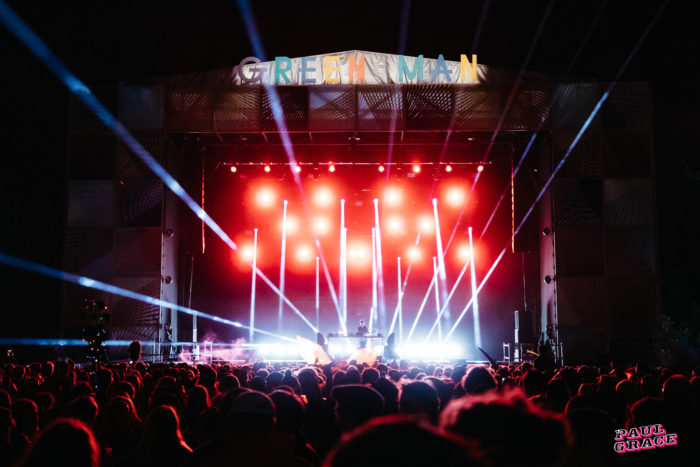 Before that, Anglo-French outfit Stereolab delivered the sort of chilled-out experience that brings all aspects of this varied crowd together on the rolling hill on the main stage.

Back to Chai Wallahs for Emily Capell’s early Sunday set, the north Londoner brought shades of Amy Winehouse to a fun-filled show that saw her laugh off technical problems with ease. From a Joey Barton tribute to scathing takedowns of government inaction, Chappell and her three-piece band performed with such ease and infectious joy it makes you wonder why they weren’t much more elevated on the bill.

There was time for Big Moon front-woman Juliette Jacklin to receive – and accept – a marriage proposal from her boyfriend at the end of their set, having met here in 2015, and that sense of love and harmony seems to permeate every inch of this festival. 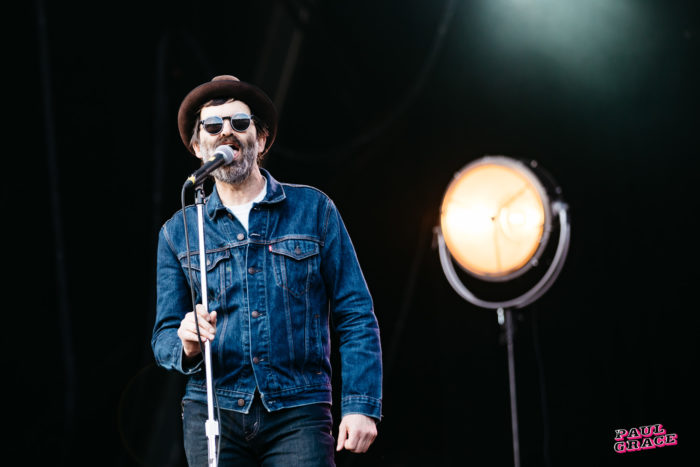 Sharon van Etten offers more somber reflection as Sunday winds to its conclusion, with punk rockers Idles wrapping things up with a raucous set that displays the sort of awareness, humility and energy that so embodies the festival. 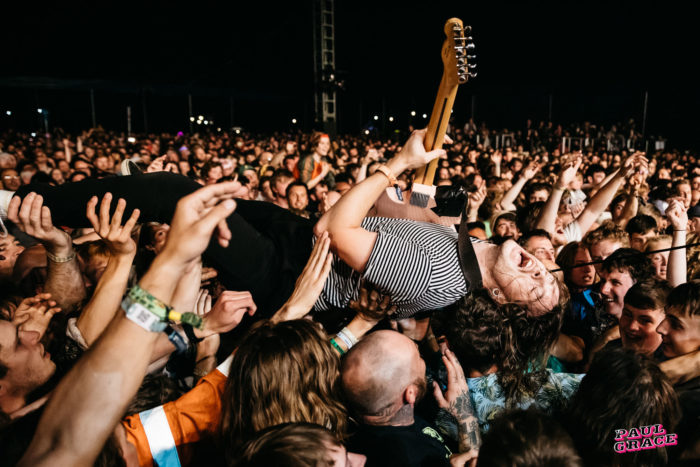 As the Green Man burned and flickered in the last embers of another festival, it became clear just how much festivals like these, perhaps on the fringe of general consciousness but still so popular, remain utterly crucial to UK music culture. And in that, none currently do it quite as well as Green Man.

Photos as credited. All words by Paul Grace, for more of Paul’s writing and photos go to his archive. Paul is on Facebook, Twitter, Instagram and his websites are www.paulgrace-eventphotos.co.uk & www.pgrace.co.uk