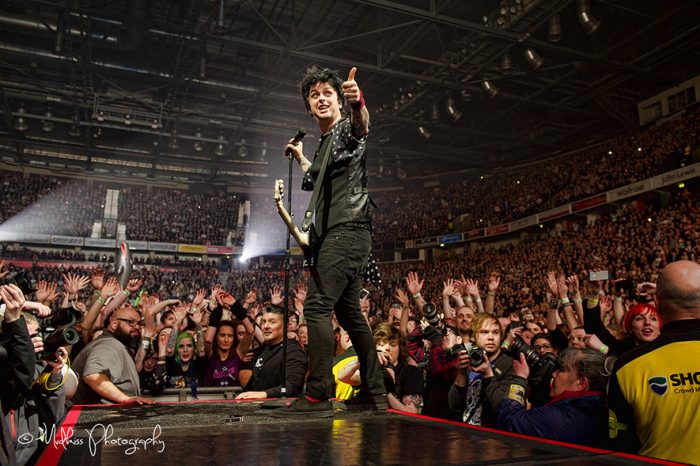 The packed auditorium went wild for Green Day from the first chords of ‘Know Your Enemy’. The lack-lustre guy in a bunny suit trying to warm the crowd up had been totally unnecessary. The band walked on to Apache-styled music and threw themselves into the performance from the start. With forays further towards the crowd on a catwalk jutting out into the audience, the band bounced around the stage like teenagers.

The ever-athletic band hadn’t lost any vigour with age. Tracks from the recent album Revolution Radio mixed in with songs from their back catalogue. The crowd loved it. With Billie Joe working overtime to get the audience singing along, the atmosphere never dropped below fever pitch. ‘Revolution Radio’ and ‘Holiday’ featured early in the set, making the crowd wonder what Green Day were going to produce when the set really got going. The quality and drive was amazing from the outset. 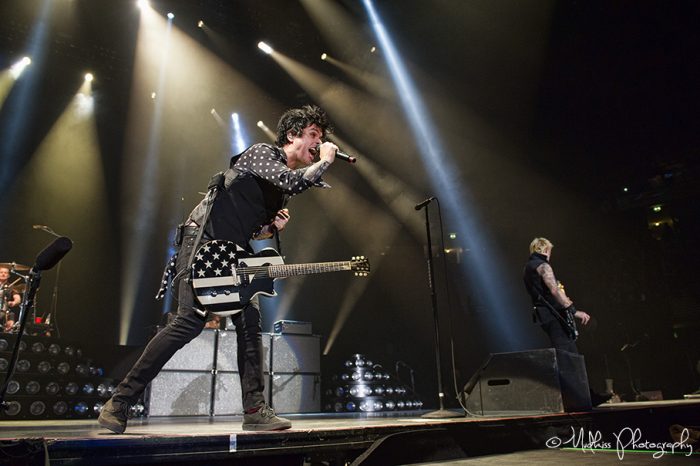 Green Day are known for bringing audience members up on stage. The Manchester participants did extremely well. There seemed to be few nerves, with all three lucky gig-goers giving a performance, rather than losing their cool on stage. One guy ran all over, singing and hugging the band. He made it up to Tre Cool on the drum podium, definitely relishing his 5 minutes of stardom. The girl who got to strum along with the band earned the right to take away the guitar at the end of her time on stage; a great and regular gesture from the band.

The hits kept coming. Fans of the early albums had ‘Christie Road’ and ‘2000 Light Years Away’ from Kerplunk. ‘When I Come Around’ from the band’s breakthrough album Dookie was especially well received, as was ‘Basket Case’ later on. Later albums such as the hugely popular American Idiot and Revolution Radio were well represented. The many tracks from American Idiot included ‘Boulevard of Broken Dreams’ and ‘St Jimmy’. ‘Still Breathing’ and ‘Forever Now’ showed how good an album Revolution Radio has proved to be. 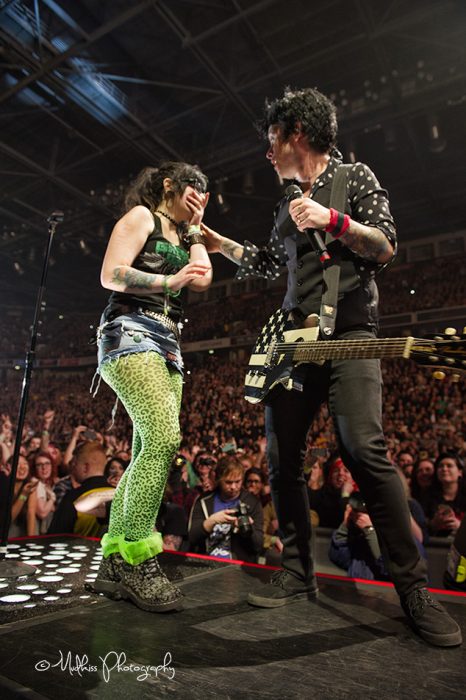 The crazy covers of ‘Shout’, ‘(I Can’t Get No) Satisfaction’ and ‘Hey Jude’ saw all the front band members laying on the floor, with Billie Joe singing flat on his back. The pace of the concert rarely gave up during its 28 song duration. Mike Dirnt and Tre Cool showed how meaty the rhythm section of Green Day are, driving the frenzy of the songs throughout. The touring band members, Jason White, Jason Freese and Jeff Makita, give the songs even more substance, including a nice bit of saxophone on ‘King for A Day’ from Jason Freese.

The encores were excellent. The first saved two of Green Day’s strongest tracks‘American Idiot’ and ‘Jesus of Suburbia’. The second provided the heartfelt acoustics of ‘Ordinary World’ and final encore ‘Good Riddance (Time of Your Life); a fitting ending.

There is a lot of love at a Green Day concert. The way the band invite members of the audience to get on stage and Billie Joe Armstrong’s stellar work in audience participation make these concerts special events. Few groups give such effort to involving the crowd in the gig. It meant the atmosphere was amazing and inclusive. Mixed with some hairy pyrotechnics and a staccato light show, the gig was quite an event. Billie-Joe implored the crowd to stop watching through their phones, saying ‘We’re making memories’. The night was certainly unforgettable.

Please note: Use of these images in any form is illegal. If you wish to discuss anything please contact mel@mudkissphotography.co.uk