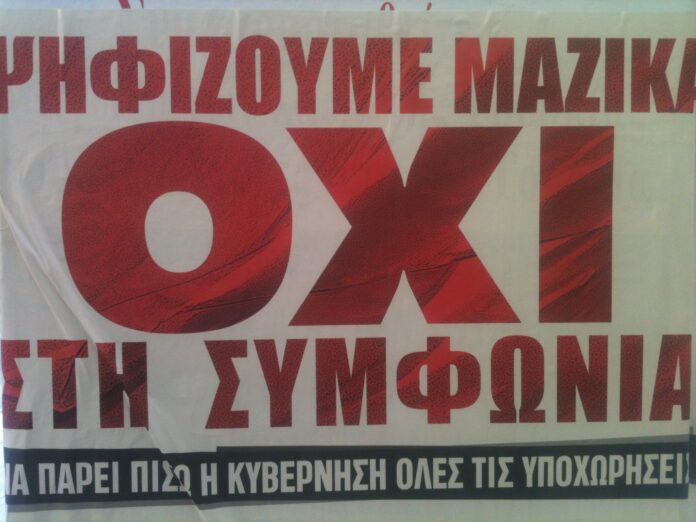 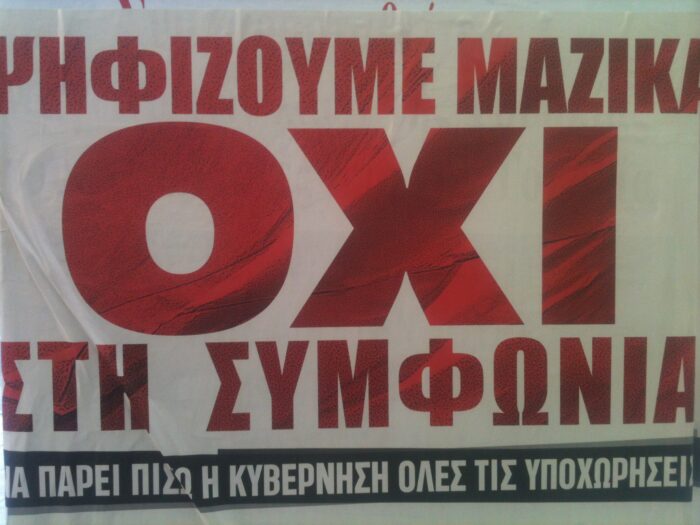 Greece : Will The Real Revolutionary Please Stand Up : daily report from our man in Athens

I am woken up by a chugging old Toyota truck, the type favoured by ad hoc fighters worldwide, lapping the neighborhood. A man is shouting through loudspeakers on the truck. I have no idea what he saying except to pick out the repeated word “Troika”.

I have a gentle mosey out and fail to learn the very basics of Greek from the fella selling me toothpaste and washing powder. I should be able to at least say hello and thank you but my command of English is crap nuff and I cannot for the life of me speak let alone remember these long long funny sounding things. Language is a problem. I am unable to bring you the thoughts of anyone who doesn’t speak English. Of course we all know what that means. The poor. Those living on the streets. Those most suffering the assault of austerity. Those most likely to kick back hard. I keep approaching people sitting around, killing time in public places but they often speak no English. Most smile, shrug and say welcome. Some have told me to sling my hook. I need to find some way around this.

I take the short walk over Strefi hill to Exarcheia. For anyone who has spent their life head buried in record collector Exarcheia is legendary as one of Europe’s great counter culture quarters. Where the filth fear to tread, liberty rules and graffiti covers every square metric measurement of everything. Google it.

I settle outside a cafe for some coffee and food. I speak to the owner, “Of course I voted no. Everyone voted no except those scared of loosing money.” He wants an agreement with the EU. Everybody wants an agreement with the EU. “It is a game. Tsipras plays their game very well. I trust he understands the game. That’s why I voted no. The game will never end. If it ends something bad will happen. The end of the EU. No one wants this.”

I speak to a young Italian independent journalist. He didn’t tell his family he was coming to Greece. Why?

“They would be scared for me. The Italian TV is telling a story of fear. A run on the banks, collapse of the economy. Violence on the streets. I have just seen a BBC report. They are in Sygmata square showing queues of tourists at a cash machine. What great city centre cash point in the world doesn’t have a tourist queue in summer? All the world thinks this is Greece today. But Look around you.”

I explain to him that I gave up believing the BBC, the Guardian, the lot, years ago. As a trainee press photographer daring to go out, against orders, to a miners picket. Not having a clue I did not stand with the press pack and found myself on the “wrong” side of the lines. In a pit village besieged by a coppers. A village fending off attack by horse, by foot, by snatch squad, by baton. The next day the events were reversed by all the media, the BBC, the Guardian, the lot, to draw a picture of insane miners hitting poor coppers. It blew my young mind.

My mistrust of the media is so ingrained I forget how much they are trusted by others. How much of the game is perception. Of course it is. This is how a plutocracy sustains itself and endless war. Perhaps Tsipras is playing a very good game indeed. The referendum seems to have resulted in ever more Greek people understanding that the media is propaganda. This is said to me over and over. This understanding may be a game changer. This understanding cannot be easily undone.

So fuck Jon Snow. Fuck Paul Mason. The international press are lying to you. Greece is not collapsing. The Greeks are resisting being screwed. Come and spend your holiday money here now. The flights are cheap as chips and the weather is hot. Very hot.

Now I’ve said that I bet one half drachma the Greek banks will run out of cash tomorrow.

Everyone knows the Greeks cannot pay the debt. Well everyone except your average Guardian and BBC consumer. But anyone who knows anything knows the bankers and politicians got so wet with fraud, the debt got so out of control, it is simply unpayable. The EU will not let the Greeks leave. The Greeks do not want to leave. There will be an agreement. A write off. The game is to let the Greeks off the hook without getting the peoples of Spain, Ireland, Italy and the rest all worked up to demand the same. Thus the Greeks have to be seen to suffer. That’s why the tele news presents a few tourist queue at a city centre cash point as a run on the bank. It’s bullshit. It’s managing your perception.

Ok so where was I? That’s right, Exarcheia. Well my first taste, iced coffee and rocket croissant with some lovely but undeniably proper middle class people, was not exactly what I expected. See how even smug smartarses like me have our perception managed. I even had to ask if I was actually in the right place. Yes the square was full of possibly homeless and a group of youngsters sang to an acoustic guitar. The air stank of weed. ACAB, antifa everywhere. But mostly it was nice cafes serving good food. Maybe this was just the lunch time crowd but everyone I spoke to was a left leaning social democrat. To this south Londoner it all felt like a day trip to Brighton. I was surprised. Last night I was told I could go and see the anarchists fight the cops in the square. It happens every Saturday night and draws a crowd. I pass a bar serving rocket salad to well groomed social democrats called “Revolt”. Jesus, can everything be commodified? Has everyone signed to CBS?

That’s just the heat talking. I know the revolutionaries are too busy fermenting revolution to hang out in bars, so I dived into a bar and had a chat with a group of people in their 20s and 30s. Of course they all voted no. Everyone voted no except those who fell for the TV lies. I am told Syriza have commissioned a report on media bias. The referendum was the victory of “the free will of the internet over the hypnosis of TV”.

They seemed to generally agree that there is now hope where there was sweet fanny adams before. As ever, I quote loosely.

One amongst them was more cynical, “like every government they appoint their own. Favourable judges. Syriza are still buying arms we cannot afford. Greece is a client state to buffer against Turkey and the Balkans. They sell arms to both sides and we all fight. It was fine when the pie was big enough. Now the pie is small we have suicide and homeless.” They all agreed that Greece had, has, a problem with an overblown state employing people to do ghost jobs. In government, in the military.

I expressed surprise that I had heard only social democrat opinion so far in Exarcheia. Where’s the revolution?

“People are wary. Quick decisions are not good. Not so long ago we had the junta. My father fought to overthrow it. Something changed yet nothing changed. Now they have a camera instead of guns. Money instead of bullets”.

There’s my money quote for the day so I leave to look for some honest to goodness uncompromising anti-authoritarians. Which I find in an anarchist social centre. At last, the revolution. Well sort of. I saw a rooftop bar with fantastic food and drink at bargain prices. One customer shrugged when I asked if she knew it was an anarchist social centre. She even admitted, without lowering her voice, to nearly voting yes and carried on drinking without reprisals.

A worker did offer a brief radical perspective of recent events. She said Syriza previously attracted a wide coalition of support because they offered some important quick wins in regards to LGBT rights, Golden Dawn and immigration laws. However, now this support is waning. Only in words so far but maybe action soon. She was too busy serving drinks to talk at length. Quite right. Action not words. Say I the new wordsmith.