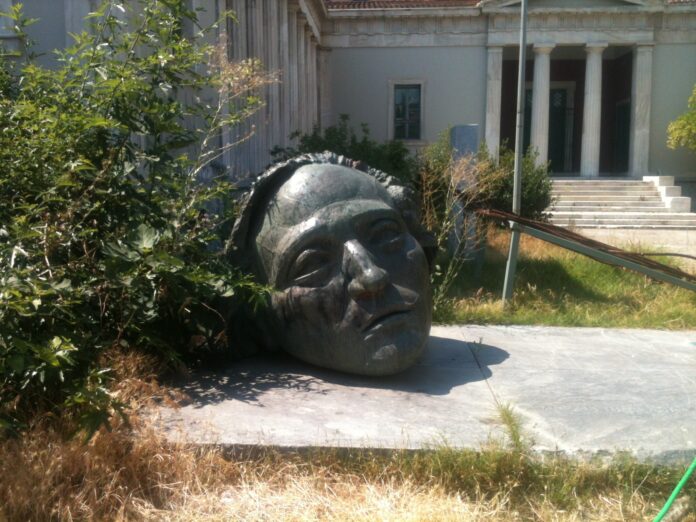 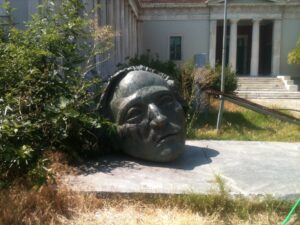 I am alone in the old mans cafe except for a new younger man serving.

“It was the first time I voted in my life. Like everyone, I voted no but it seems we are getting yes anyway.” He shrugs “Since I left University 7 years ago I get work where I can. None of my friends work for what we trained. Many of my friends are unemployed.”

Not for the first time I trip on the broken roads. Each time someone asks if I am ok before shrugging. This early on a Sunday the streets are empty. The benches taken by the sleeping homeless.

Wandering late last night I came across another street gig. A generator, a vocal PA and a fold up table for a bar. The crowd were mostly as old as me. The band played a fifteen minute version of “I’m waiting for my man”. They were good. Close your eyes and it could have been a missing track off “1968” with Reed having a bad throat day. I spoke briefly with a wrinkly old rocker next to me “they’re singing for Greece. We’re waiting again for our next fix from the Troika. The whole world is debt junkies and Greece is paying the price. It will be you next.”

I see the street cleaner who I spoke to a few days ago. Where he was then friendly he is now not. He says something in Greek and carries on sweeping. Not aggressively. I somehow feel he’s embarrassed. Embarrassed for the situation he and his people find themselves in. Accepting coffee as a gift. Feeling dirty more dead then alive. Or maybe he just thinks I’m a flash foreign prick. He clearly does not want to talk so I move on.

It’s tempting to see metaphors in everything. The regular streams overflowing from domestic plant watering pouring down the drains. Just sort your friggin hosepipe out. Lean cats laze in the shade of the domestic plants.

The debts were caused by crazed bankers and extremist politicians hoping to steal for themselves ever increasing riches. These bastards now have you and I repaying for the failure of their endless speculations. Talk of anything else being nationalised for the common good will have these bull headed monsters screaming across the airwaves. But they quietly share out their debt this golden triangle of political elites, media and oligarchs.

The plutocracy are ruthlessly kicking Greece to teach other peoples the price for not accepting the rule of the wealthy. That’s it. Greece is trashed to discipline the Spanish, the French, the Portuguese, the Irish, you and me. It’s one big fucking warning to the rest of us plebs.

The army runs the drugs and the cops kick the crackheads who dare try to quit. That’s debt for you.

Syriza were a government elected to end austerity, reinforced with a resounding referendum victory. But the bankers say no. The austerity, the swindle, continues. This is the inescapable reality. Democracy as it stands is an illusion.

I am walking in circles here. My thoughts are turning home. Be it reform or revolution the Greek people cannot confront the plutocrats on their own. The people of the UK, you pop junkies reading this, need to get on board the global insurrection against the rule of the rich. Pull your finger out, fight the power. On the streets.

On the way to Syntagma Square I see a homeless fella who hasn’t moved one jot all day. He is laid out on a concrete bed reaching a plastic cup out with one hand. His eyes are shut, his chest still. The change I put in his cup earlier remains untouched. I call over a passing woman. I lean over and say hello. He opens one eye. He doesn’t even look up. He is broken. Not quite dead. He recloses his eye without moving. The Greek woman shrugs and looks at me with sympathy. Fuck.

This evenings smaller demonstration is attended by a black bloc of maybe 100 anarchists, mostly young. Most were decorated one way or another, t-shirt designs such as St Pauli or Motorhead, patterned headscarfs, patterned bags, which sort of makes a nonsense of the anonymity of a black bloc. Police spotters really don’t have to be that keen. Maybe a dozen anarchists carried clubs and motorcycle helmets. So it looked like they meant business. They set about baiting the communists and the cops a little. After a while they all marched off. I joined them. The press pack followed snapping away as anarchists shouted “no photos” aggressively at tourists. We walked up the road. Riot police in side streets backed away as anarchists offered them out. About 1km up the road everyone dispersed.