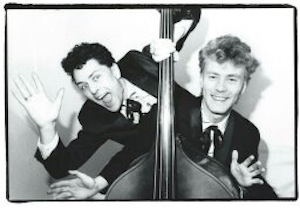 After 27 years the Birmingham based cult skiffle cow-punk band Terry and Gerry are reforming for a tour in honour of their biggest fan, the late John Peel. They will be playing all over the country in Oct / Nov 2014. Full details below.

BBC disc jockey and avid fan John Peel promoted the band when apparently by chance he picked out their demonstration tape because his wife’s best friends were also known as Terry and Gerry. He thought the coincidence was too great to ignore! The band recorded four critically acclaimed sessions for the John Peel show and got a very fond mention in his autobiography.

In the mid-eighties the four piece band released six singles and one album. ‘From Lubbock to Clintwood East’: Each went to Number One in the indie charts. Reviewing their single on Radio One Morrissey declared ‘I love it!! Don’t know why!!’ The band toured extensively in the UK, Europe and America gathering fans from Joe Strummer of ‘The Clash’ to Shane MacGowan from ‘The Pogues’.

Terry and Gerry regularly appeared on radio and TV, including sessions for ‘The Old Grey Whistle Test’ and ‘The Tube’, they wrote numerous theme tunes for Central TV and were the subject of a 30 minute documentary by the legendary film maker Norman Hull, which aired on British Television in July 1986.

Still as energetic and vibrant as ever they continue to chronicle the lives of the people from the city they love, Birmingham.

Check out one of the band’s most well known songs, Clothes Shop, below. Repeat after us now…