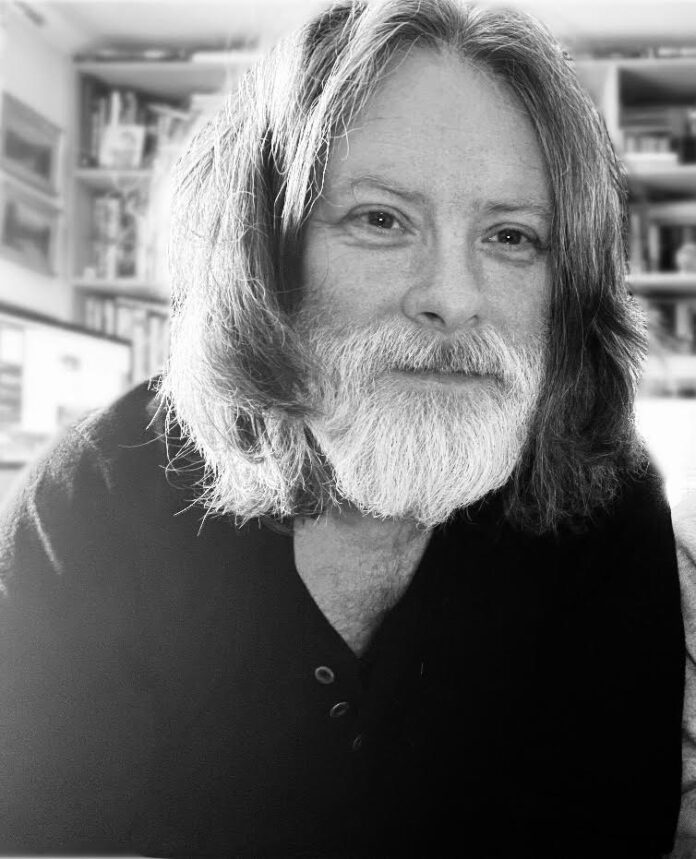 I started a feature just before the Covid outbreak on great music venues which was put on the shelf for obvious reasons. With gigs looming on the horizon again I thought I’d start the ball rolling once more with a venue that has stayed true to grass roots music in the diversity of the acts, the attitude and the whole philosophy of the way the place functions under the enigmatic ways of Jay Taylor. He’s kept the torch glowing on full throttle since the sad passing of Jan Oldenburg, who made Night N Day a staple of the Manchester music scene from the humble beginnings of a chippy that was the start of a mass transformation of our beloved Northern Quarter. I spoke to Jay back in May with the premise of getting a piece up and lo and behold the date for venues opening was put back once again. Now seems the right time since the venues have finally opened once more to live music. Jay gives me some insight into the legend of this historic venue…

LTW: Anyone old enough knows about how the venue started. How have things changed since you’ve been around?

Jay Taylor: Well I was a customer who fell in love with the space and the people, the shape of the room, everything about it. Then I transitioned from a customer to someone who worked there. So I worked there for a spell in the early 2000’s then went away and did other music industry things, some which was bouncing around in the back of a tour van with John Robb and then I came back. Jan (Oldenburg) who I had huge love and respect for with his independent spirit said “When are you coming back?” And I did and that was that. It’s a truly remarkable independent space that I’ve always adored.

You seem to tick all the boxes with the diversity of the music genres. Who picks the artists?

It’s me. In terms of diversity and control of the diary there’s a handful of reasons it’s a good idea. I mean, politically I feel an obligation to represent what Manchester has to offer and Manchester being an extraordinary diverse city when it comes to culture I think there’s a bit of me that wants to buck that trend of what an independent venue is supposed to be, historically what it was perceived to be, young white men with guitars making a wonderful racket. Sometimes they can do things that are transcendent and amazing, but a venue can be more than that. Part of my game plan was to push into those areas that traditionally indie rock n roll venues hadn’t gone into. I tried to get promoters and artists to the venue who might crucially have never considered the kind of spaces where they’d normally work and it worked. I like a schizophrenic diary me.

You’ve supported unsigned bands going way back. I was in one of them back in 1994. Is this something you’ve always had a passion for?

Sure. It’s always exciting to hear new music ultimately isn’t it? That’s the passion. Those emerging bands you’re talking about, essentially they’re musical surprises. You hear some something and you go “Wow!” It’s the joy of discovery. It’s the timeline. You’re seeing the beginning of a timeline where they’re emerging into the world. You’re seeing their birth. That band headlining are slightly more forward on their timeline. They’ve built an audience, they’ve played the tables a little bit and done that development work. A lot of these support bands jump to headline status quickly. Sometimes it happens slowly and sometimes it happens really quick smart.

A bit like Slow Readers Club in a sense.

I have such respect for that band. They’re just grafters. Perseverance and self belief completely worked in that case. The level of graft and believe in what makes up a great rock n roll band within SRC is extraordinary.

There are a few managers out there in the business who for example, if a band can’t fill a venue in a few months of being together, they bin ’em without giving them time.

I understand the industry, as well as having an enthusiastic mindset also has a fiscal mindset where they want the band to immediately communicate with larger audiences and those audiences pay for the infrastructure. I completely get it. But some of my favourite artists of all time are people who’ve never played stadiums or played large concert halls or never played to more than 200 people. It doesn’t mean they’re doing something wrong, because they connected with me in a really meaningful way. It means it just didn’t happen for whatever reason or they just didn’t grow. It’s not even a reflection of quality, it’s just a series of events that happened that didn’t push that thing forward. It’s certainly not a case of ‘every great band becomes massive’ because loads of subjectively great bands don’t. You can’t always decode that.

A few big names started out at Night N Day. Any memorable ones that stay with you?

This question comes up a lot when people ask me about the venue. The default answer to this is I’d rather not look backwards. I’d rather talk about the things that are coming through. My levels of excitement are all about what’s happening next. Because we’ve had such a fallow period the things that are happening next take an even bigger importance. We’ve had a cultural drought. Let’s have it right, the grass roots music sector has had a really shocking time in terms of sustaining itself, so I’m really exciting about the things in the diary. A couple of things in the diary are people we’ve had a long lasting relationship with. For instance Elbow are playing in November as part of Night N Day’s Birthday week. We’ve got a long relationship with that band. They’re written into the venues DNA and things like that are really nice you know. It’s nice for those people to reappear.

How have you coped through lockdown and what projects have you been involved in?

Grassroots venues only make money doing two things. The drinks, in brackets sometimes food. They sell tickets. The whole live sector has not been able to do that, it’s been devastating. One thing about going into lockdown was the one thing to keep us sane was being busy. I want to come out of this and look back and say “What did you do?” I wanted to look back and know exactly what I’d done. So when historians go “What did Jay Taylor do during lockdown?” I’ll be able to tell them. My ancestors will be able to tell them. I was still tending the diary in the background, the things that needed rescheduling. Sometimes lots of times, so those promoters and artists weren’t thinking, oh, they’re not answering the phone. I made sure it was all being reconfigured in the background. I did some work for the Music Venue Trust, helping them support grassroots music venues in the UK, but specifically in the North West, making sure venues were advised and supported. I sit on Sacha’s Greater Manchester Night Time Economy taskforce, trying to support the night time economies and Manchester music culture. Various bits and pieces really. The alternative to not having for day off a year was just jumping through Netflix and Amazon Prime and I didn’t want that to be my year. I wanted to be very active as my terms of a go to for my wellbeing. Being busy and engaged is sort of my coping mechanism. Happy is the man who can make a living by his hobby. It’s great to help people and be able to reach out.

Are you concerned about social distancing in these small venues?

I’m concerned about the people inside a venue being safe. Slowly but surely the way people are going to operate with the night time economies, there are going to be a few things in place that are gonna make those rooms safe. What I would say to anybody, before they start getting worked up about the night time economies ability to police themselves, they should concern themselves with retail first. Have a look at what retail is doing before they start staring at music venues. That’s my advice.

How does it feel to be almost back to normal?

It feels really good. I’m really pleased to see that a load of venues have come out of this intact. The reward for that work with the Music Venue Trust is most venues not closing. A bit of that has been the Culture Recovery Fund, discretionary grant locally, negotiating with landlords, trying to get the PRS to back off. Various scenarios to keep venues open. The reward is that we will emerge into a Manchester we recognise.

Does Jan Oldenburg still hold an influence on the venue?

Of course! He’s everywhere. I think about him all the time. It’s still a family business. Jan’s daughter still runs the place. There’s still an Oldenburg cog in the wheel you know. Night N Day is going nowhere. We’re smart and dogged. That’s your survival instinct.

A top bloke with his finger on the pulse, Jay Taylor continues to make Night n Day one of the go to venues in our rich music heritage. See the statement below and get down to a gig while it’s still happening… 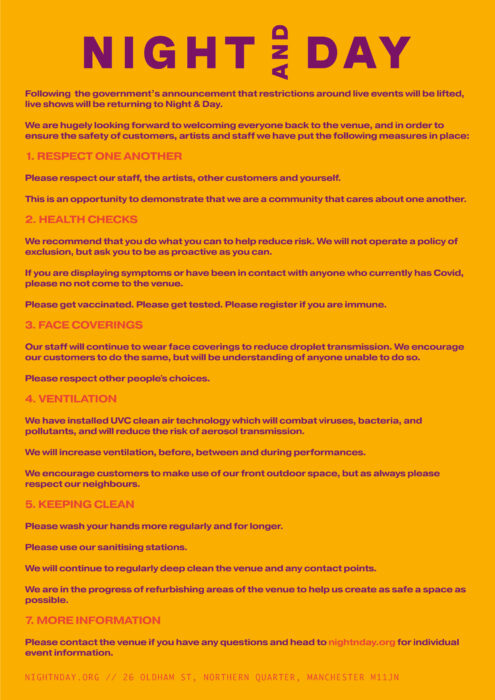