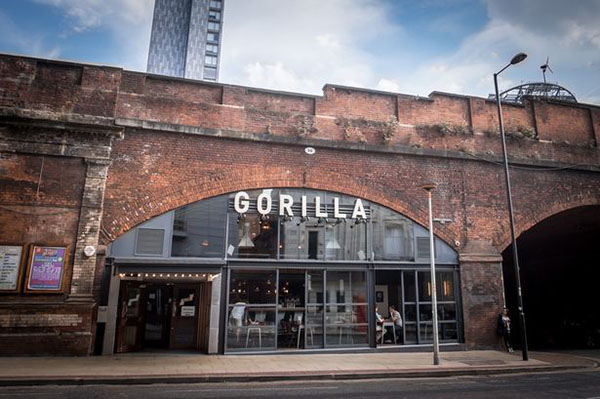 As it’s fast approaching Independent Music Venue Week I’ve decided to get some insight into great venues around the country that support new music and old bands alike. Being no stranger to Gorilla I have a chat with Kieran, one of the folks behind the scenes who make this place tick.

LTW: How was Gorilla born? What’s the history behind it?

Gorilla used to be The Green Room which has a rich history and gave starts to much-loved Manchester bands like James and Doves, and leading comedians like Alan Carr, Steve Coogan and Caroline Aherne. They closed their doors in 2011 and Trof group took over turning the main railway arch into a cool two storey glass fronted bar, kitchen and gin parlour, and creating a 600 capacity gig/club/comedy venue. Since opening in September 2012 the venue has hosted gigs by the likes of Everything Everything, Delphic, James Blake, Frank Turner, Blossoms, Foals & Sam Fender along with club nights from The Warehouse Project & Now Wave amongst many many others.

LTW: You seem to tick all the boxes with the diversity of the music genres. Who picks the artists?

We do. However we also work along side the best promoters in the industry who send a lot of gigs our way. We’re lucky that bands want to play here due to the great team we have and an amazing reputation.

LTW: We notice you had Kylie on not long ago. How did you pull that one off?!

She chose us! She wanted to play two intimate European gigs before her arena tour and one of them was Berghain in Berlin and the other one was Gorilla in Manchester. Needless to say the tickets didn’t stay around for very long!

LTW: We support a lot of unsigned bands. Where do they figure in the scheme of things at Gorilla with your schedule?

We are pretty lucky to have The Deaf Institute which is also owned by us and serves as a breeding ground for smaller bands whether local, just signed or ones which are unsigned. Our marketing and booking team work with the same promoters for Gorilla and Albert Hall so we get some really exciting acts there before they end up playing Gorilla. Also these bands who are filling Gorilla also have the opportunity to give a platform to their favourite new artists and they often have local bands play the support slots. It’s quite a nice way to work to be honest!

LTW: Any plans or ideas for the future?

The venue is doing really well and we are working hard to improve things all the time. We are focusing on more and more in house shows though in 2020 and have lots of plans to bring some really special acts to Gorilla. You’ll have to keep an eye on us though I can’t really go into much detail before we announce!

I’ve been to loads of gigs at Gorilla and can safely say it’s a venue I’ll always come back to. Early gigs by Cabbage , The Blinders and a mental Cribs gig were highlights for me. It’s a intimate venue yet with a large feeling to it and the sound has always been excellent when I’ve been. As stated by Kieran regarding The Deaf Institute. The same can be said for Gorilla being the breeding ground for the O2 Ritz. Check out the gig guide below and get yourself down there!