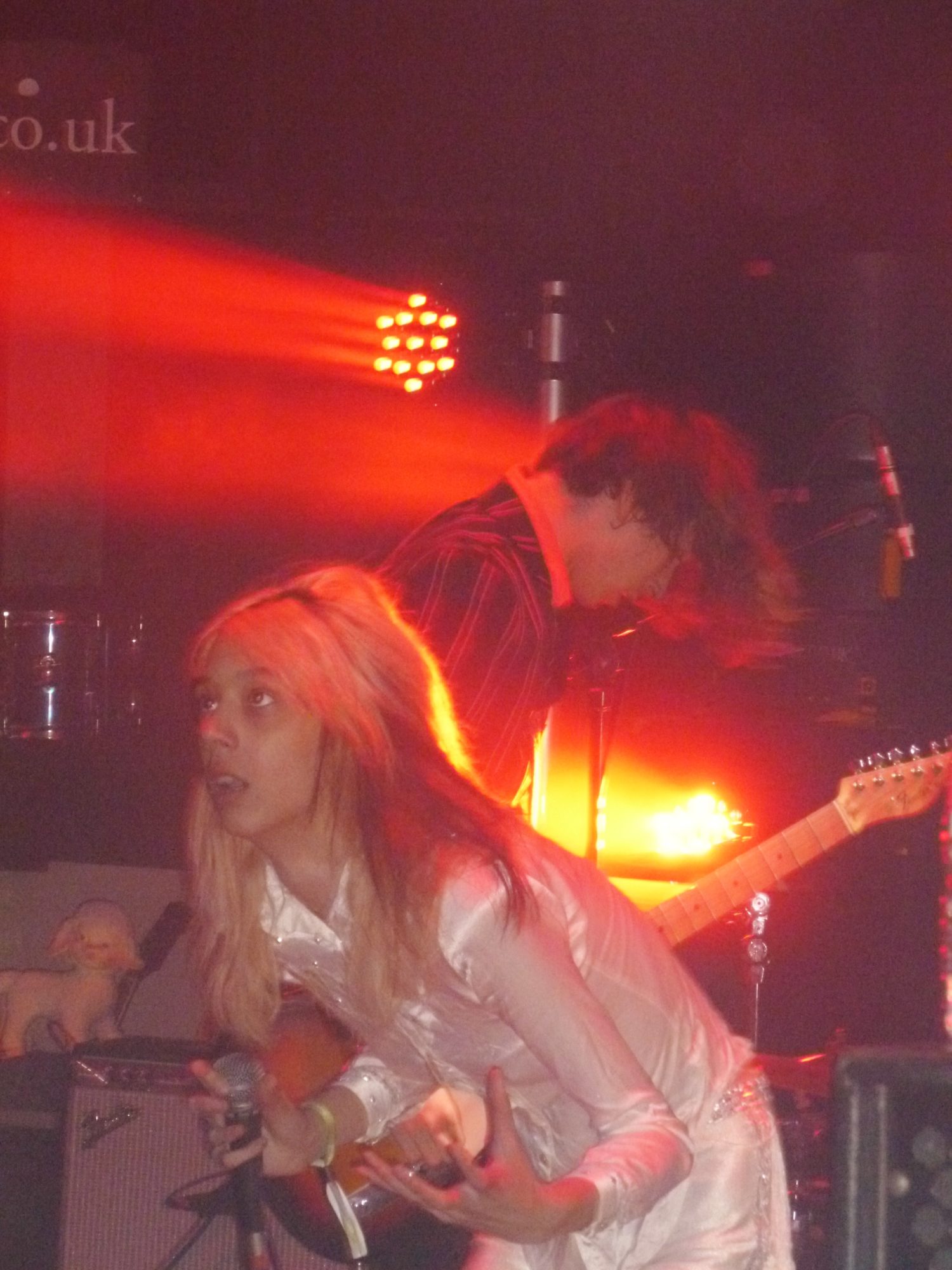 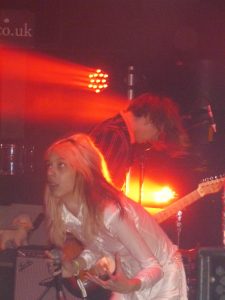 Now one of the most anticipated city festival dates in the calendar for those seeking new music Steve Johns headed to Brighton for this year’s Great Escape.

Let’s go to beautiful Brighton for the Great Escape Festival of new music I thought. What could possibly go wrong? Nothing much apart from some torrential rain and train loads of industry types wearing laminated delegate passes that they could have worn as sandwich boards if they were any bigger. Standing in separate lines for the fashionable bands as they file in past you was in danger of impacting on my judgement so I decided on a more interesting tour of the seaside.

First up in the Brighthelm Centre was Glasgow’s Emme Woods. It was always going to be hard to create the boozy atmosphere of her songs at dinnertime but Woods and her band gave it a go. Going straight into I Don’t Drink To Forget with its “The only thing left is bitterness and wine” feel was a good start before second single I’ve Been Running and its top trumpet parping was even better. As Woods did Bottle Of Gin solo even the pet Chihuahua Bubbles that had accompanied them onto the stage kept a low profile. Coming across as at ease on stage meant Woods didn’t need to worry about the bad haircut she joked that Mum had given her as she had enough charm to compensate. 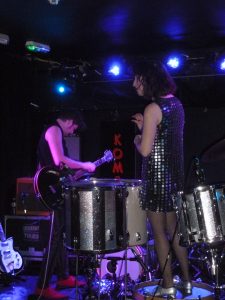 Only a certain type of band could get away with the name Starcrawler and they had to be from Los Angeles. Blasting onto the Haunt stage with the grin inducing debut track Ants they look like they have been kept in suspended animation at Rodney Bigenheimer’s English Disco since the 1970s. An eponymous track seems to encapsulate the peculiar relationship people have with LA while the personification of this particular brand of madness is a singer called Arrow De Wilde who comes across as the unlikely child of Exene Cervenka and Ozzy Osbourne. She starts off in a strait jacket and works her way through blood capsules and all manner of contortions as the ridiculously young and non-too shabbily named guitarist Henri Cash duck walks through the gaps. They leave with the promise that “we will kill you” well and truly kept.

Over town there was a slightly less intense flavour of Los Angeles in the shape of husband and wife team Kolars. That singer Rob Kolar has to rely an audience member to support his mike stand after some enthusiastic vocals and Lauren Brown spends her time on a bass drum which she literally taps out the songs rhythm on makes for a spectacle. Song wise whilst One More Thrill delivered on its promise some of them were a little too Billy Idol for me but they went down well with the crowd and the energy levels couldn’t be questioned.

This might have been helped by the absence of two deep hipster twitchers who seemed to dominate the gigs of the name bands with their ludicrously elaborate and obtrusive camera combinations. In some venues you couldn’t see the band and didn’t want to move in case you knocked the bassist out with a Paparazzi flash light. 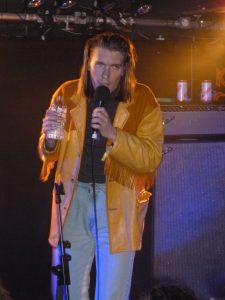 Ending the first day on Komedia’s main stage is Sydney’s Alex Cameron who since a film about SXSW Festival where he took his loser persona and pressed its nose up against the window has decided to up his game. Indeed having seemed to base his act on Dennis Hopper in Blue Velvet the only disappointment is that the band which fill out his previously sparse electronic driven songs look like the Eagles. Otherwise the slow deliberate dance moves which I subconsciously seemed to be mimicking prompted cheers every time he went for one and his rich voice delivered the tales of failure from his Jumping The Shark album magnificently. While the supremely catchy Marlon Brando seemed to test his poker face we were left with a chorus too carry off into the night.

The following day begun in the most far flung and still easily walkable venue Bleach. Now my understanding is that membership of the original Zipper Club is dependent on having had open heart surgery and ex Cerebral Ballzy guitarist Mason James seems to be mining an affection for ’80’s style college radio tune writing. It is particularly successful on songs such as the single Going The Distance where the Matthew McConaughey lookalike and Lissy Trullie’s vocals combine to good effect. As for trying to get people to turn their phones off perhaps the thrashy blast from the past style ending to the set was the best response. 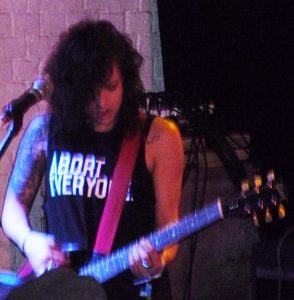 I had already warmed to Like A Motorcycle because with all these bands it would be helpful if they all sounded like their name. On taking the Green Door Store stage there was the all-out action release of a band who have already built a following in their native Canada with their High Hopes LP and have the confidence to call a song Punk One. With drummer Michelle Skelding on lead vocals this left the rest of the band to compete for best guitar pose while I was hoping the crowd for their set later on in the day had warmed up a bit as the “What are you here for?” words rang a bit too true.

It was debatably the Belgian two-piece LA Jungle who conjured up the biggest noise of the festival with a sound that went from Kraut rock to the most primeval rock and back to achieve an almost dance like sensation. I am not familiar enough with the Jungle’s oeuvre to know whether they played Apeinapython but it’s too good a title to waste and it sounded like they should be as guitarist Mat looked like he was attempting to wriggle free of his trousers while wrenching huge riffs from the likes of Technically You Are Dead. After this hypnotic battering the spell was only really broken when band and audience split at the end of their half hour to acknowledge each other.

Another early start on Saturday with the Kamikaze Girls who marry an indie jangle to an American punk sound most effectively on the likes of Stitches. This is a band who sound better the more agitated they get and after Lucinda Livingstone’s introduction about a hippie generation who have started blaming homelessness on people eating avocados Deathcap rocked with righteous indignation.

After aptly enough watching the Parrots in a garden type bit of the Wagner Hall I was relieved it wasn’t raining but had to suspend judgement of them as good or a children’s television Black Lips as they only did about four songs and one of them twice so it could be recorded again. Chaos did not ensue.

Thankfully the band who closed my Great Escape nearly went through the floor in a packed Prince Albert. HMLTD front man Henry Spychalski’s certain something didn’t seem bothered about ending up in the bar downstairs and the look of relief on Joe Public’s face as they let themselves go was an unexpected pleasure. With songs that seem to break up into segments so if you don’t like a bit another will be along in a minute To The Door had people savouring every gust of air from an open window and The Scum Will Rise To The Top took on a particular relevance.

So if you like your glam with added goth this could be the band for you. That Manics biographer Simon Price was spotted here and at the Starcrawler set could be telling. Lyrics like “I want to hang myself in the North Sea” from Music made me think of home but should attract the particular devotion of someone who spends a lot of time in their bedroom. Time to go.

All words and images by Steve Johns.