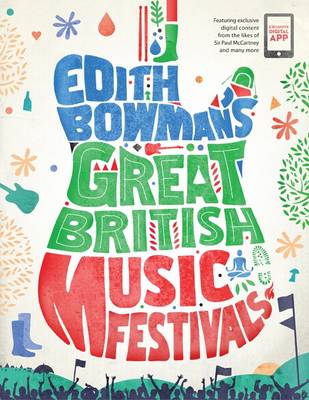 Edith Bowman chronicles some of the best experiences on offer across the British festival calendar. Louder Than War’s Steve John reviews.

If the lid hadn’t been secured and the box lowered into the ground years ago then Edith Bowman’s “Great British Music Festivals” (£16.99) would be the man in a twat hat and Kasabian tee shirt hammering the final nail into the coffin of the festival as any sort of alternative to day to day existence. From the the two day advertising opportunity that is V to the family fun day of  Latitude it perfectly reflects the blandness of  the modern festival. Looking like a tour programme with holiday snaps for the saturation television coverage of  big corporate festivals it only succeeds in highlighting the incestuous nature of  the media and bands that operate in this world. Edith seems to use it as a dating service and has gone from the bloke with a beard in Elbow to the one in the Editors who decided he didn’t really want to be Ian Curtis after all.

With radio presenters who seem to make a virtue out of  not being as cringe worthy as the Smashie and Nicey sex pests of the 1970’s introducing a succession of revolving door indie bands this gentrification is nowhere more evident than Glastonbury. Perhaps because of its history of somewhere which operated outside of the mainstream and now using that history to trade off  it’s status as establishment institution is particularly emblematic. More inspiring bands may still perform on the fringes of the festival but the Great British viewer doesn’t see this and and it becomes self fulfilling as the number of  Kate Moss wannabees in designer wellies dancing to Bruce Forsyth increases.

A partial antidote may exist in the increasing popularity of inner city festivals such as Tramlines in Sheffield. In seven years it has grown to involve 70 venues of different sizes and character but which between them played host to over 150,000 people in three days. Unlike the more compact Live at Leeds its ramshackle nature was celebrated through gritted teeth when a taxi across town only resulted in the discovery that Ezra Furman had cancelled at the last minute. Standing outside the Leadmill to listen to punters unable to get in berate the door staff  while Billy Bragg berated the Tories through an open door was however more entertaining than many of the production line experiences offered by big corporate festivals. I’m sure Strummer would have got us in through an open window before he decided the height of rebellion was sitting round a fire with Keith Allen at Glastonbury every year.

Throughout the locals seemed to have embraced the occasion and were fulsome in their directions to pubs in other parts of town where the festivities were continuing. Here the feeling of  proper town centre night out and people intent on having a good time gave proceedings an energy missing from a field in rural England. Sheffield isn’t a city of two hundred thousand people 5 days a year but over twice that all year round and and the sense of pride and belonging this engenders cannot be artificially replicated.

The conservative nature of the traditional festival crowd is personified by the lather trad dad in chief  Noel Gallagher gets in and the irate petitions which greet every rap or metal act which appears anywhere up the bill at Glastonbury. In an urban environment this doesn’t register with the predictable withdrawal of the Wu Tang Clan at Sheffield seeing their replacement by De La Soul. At this year’s Glastonbury Motorhead were deemed a bit incongruous despite the role Lemmy’s former band Hawkwind played in genuinely counter culture free festivals and their survival when they couldn’t have been less fashionable.

One obvious plus to the city festival is being able to get food and drink from places other than the ridiculously over priced stuff the captive audience is subjected to. Similarly if there’s a lull in proceedings explore the city and support the local economy by going to the likes of Record Collector in Sheffield. Opened in 1978 and if a local band released a self financed single selling it without any profit there will be nobody of note to play any festivals if this spirit ever dies.

In Hull the Humber Street Sesh featured about 180 local acts playing to over thirty thousand people in an area of the city currently free from big business saturation let alone the mass marketing campaigns that modern corporate festivals represent. The escapism at this “festival for the people by the people” more evident than at any event the likes of Branson’s Health Service swallowing Virgin are not shy of enveloping with their logo. Hopefully they don’t fall prey to a bigger is better mentality and or get hijacked by quangos and businessmen in the run up to Hull’s City of Culture year in 2017 as this is one to be treasured.

If sponsorship is required use a social enterprise which channels profits back to local charities like the fire service one which supported the stage the wonderful Ming City Rockers headlined. Rather than watching Michael Eavis nod his head to a heritage rock turn half heartedly trundling through their back catalogue enjoy being forced down the front by a director of said enterprise as their fireman stage prop goes crowd surfing with the band. I can only pray this entailed the comprehensive risk assessment metal armageddon Download would applaud as it now asks bands to sign contracts which prohibit them encouraging circle pits.

Far too late for any of this at Field Day. Now Bowman uses this as an example of a city festival which as she helpfully points out is in London and therefore convenient for Londoners. It was also home to some half decent bands but a crowd which sounded like Henley Regatta on one too many craft beers and just because you can see “Tower Hamlet high- rises” from your gated community doesn’t make it inclusive. The “enthusiasm” of braying buffoons with more beards than faces to put them on as they walked to and from the tube escaped me completely as I considered a police presence which lined the route like Millwall had crossed the river.  Still preferable to being stuck next to the spawn of Bowman in a yurt banging on about Babylon. Evenin’ all.

All words by Steve John. This is Steve’s first post for Louder Than War.