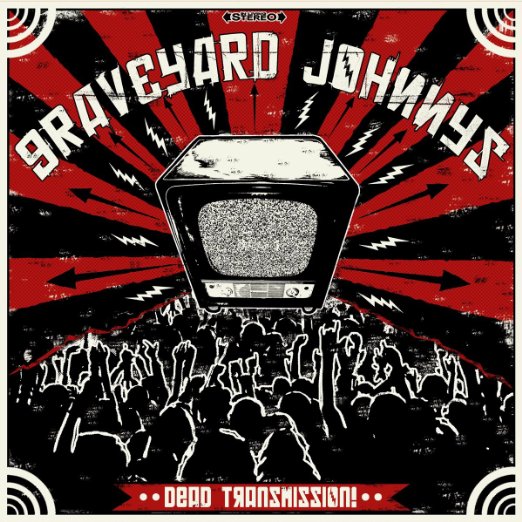 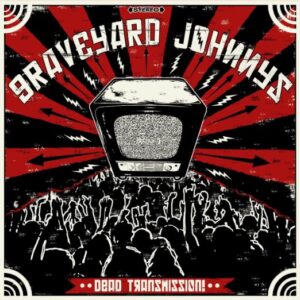 ‘Dead Transmission!’ the second, and very welcome album from the South Wales based punk rock ‘n’ rollers – having self funded their debut EP ‘Streetblocks & City Lights’ back in 2008 this three piece have been on the road ever since; they have fired up crowds all across Europe with ferocious performances at major psychobilly festivals, support slots for the likes of Turbonegro, Nekromantix, and Mad Sin, as well as headlining their own tours. Along the way they have picked up support from Mike Davies at the Radio One Punk Show, who had the bands debut album ‘Songs From Better Days’ almost on rotation, the resulting attention producing five further BBC Radio sessions including two at the legendary Maida Vale Studios, the other result being, and entirely within keeping with the psychobilly genre, their own devotees known collectively as the ‘GYJArmy’

The Graveyard Johnnys have a well earned reputation as one of the most energetic live bands, and its this live feel that has been so finely captured on ‘Dead Transmission!’ – opener ‘The Poison’ perfectly setting the tone; commencing with the regimented stamp of massed marching feet, and military drum refrain before exploding into a slap bass driven roustabout, bourbon drenched vocals simmering low in the mix; the track oozes suppressed menace and is welcome for it, as is the lyrical content…too many psychobilly bands rarely venture beyond the staple of blood, gore and schlock horror themes but ‘The Poison’ kicks a few political, celebrity culture faces along the way.

The title track is a joy to behold, a burst of static, a solid bass slap, taut guitar shredding before the entire track implodes into a mass of flaming energy, as Graveyard Johnnys effortlessly collide their punk and rockabilly roots into something much more engaging than typical psychobilly; that said ‘Because Of You’ is a perfect 90 second quiffed up, slam dancing rage that will have the bands audience exploding across the mosh pits of Europe this summer…its this refusal to be pigeon holed that I like, Graveyard Johnnys are not content to settle within one particular genre, they are drawing upon their own influences and delivering up an incendiary aural bomb.

‘Ready To Roll’ a blistering pedal to floor monster quake, with a slap bass nod to likes of The Guana Batz, the sound is relentless, powered by a primitive rhythm section and some neat guitar licks, but by the time you realise this its over and you are bundled into the snarling bear pit of ‘I Won’t Wait’ which draws its influence from as far back as Carl Perkins, then hurls a punk infused dismissive lyric at you. ‘Compromise’ is a bit of a curveball, and again highlights the bands desire to broaden their own and the entire psychobilly horizon, at times the bass is measured – almost lupine in its delivery, the track dropping away to a fragile vocal before igniting into a potent fist pumping blur…thankfully Graveyard Johnnys offer respite, ‘Mothers’ being an acoustic almost ballad number – that word will strike fear into psychobilly fans, face the fear as this country infused number is a welcome breath catcher, ideal preparation for closer ‘Little Witch’ – a final bust of GYJ mayhem.

‘Dead Transmission!’ is proper rockabilly – slap double bass, incendiary rhythms, quiffs, attitude, and insanely catchy choruses, couple this with the bands clear desire to experiment and you have an outfit deserving of your attention.