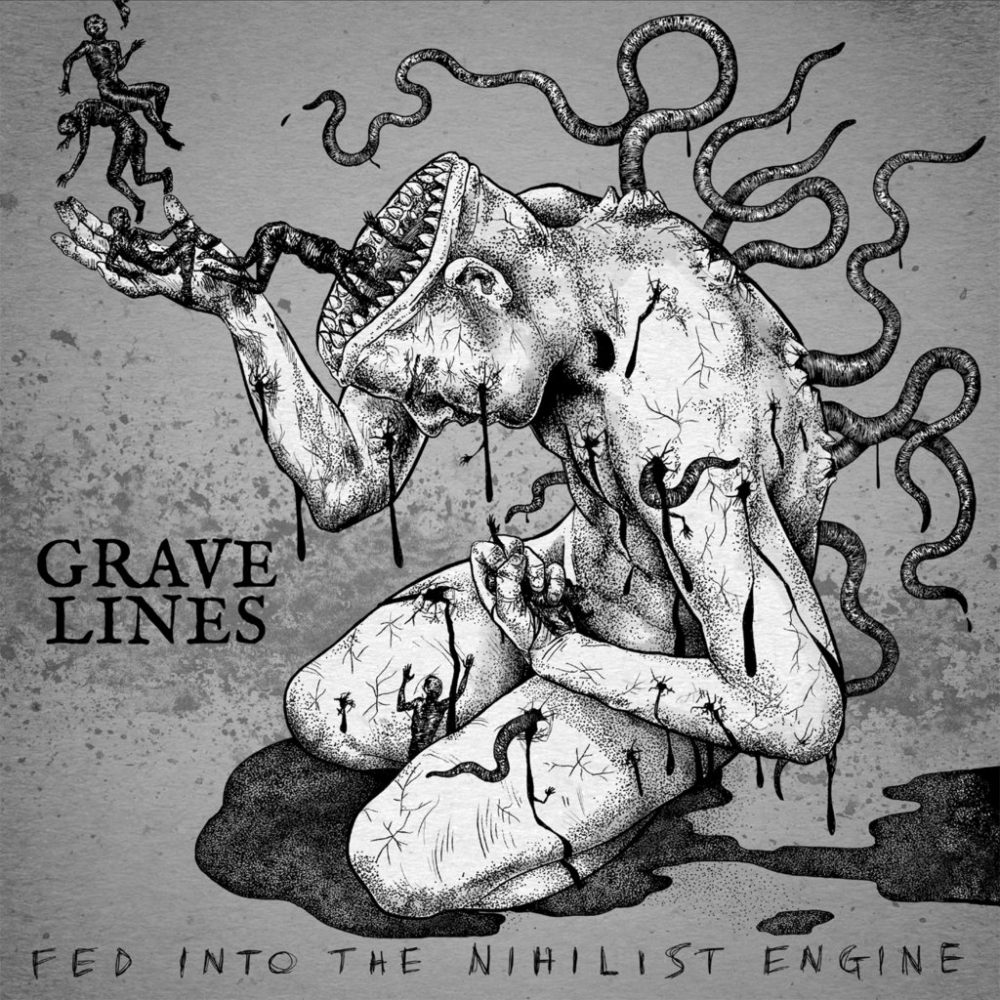 Fed Into The Nihilist Engine

Grave Lines are the latest heavy addition to the consistently great New Heavy Sounds record label. Fed Into The Nihilist Engine is another solid release from one of the UK’s best underground labels.

The nine tracks contained within their latest album are all heavy as hell in many different ways. The Neurosis style riffs throughout the longer trawling pieces are unnerving and uneasy. Although heavy, they are darkly melodic and full of introspection; introspection into the human condition. The whole album is a trip navigated via a sea of gothic, trudging nihilism.

Made up of Julia Owen, Jake Harding, Oliver Irongiant and Stgr’n Matt, Grave Lines are no strangers to the heavy music scene (previous bands include Throne, Sea Bastard, Dead Existence, Casual Nun, Landskap, War Wolf, Dysteria and The Death Letter). The bands collective influences create the tapestry for the album.

Opener, Failed Skin, is over 14 minutes in length and grows into a monstrous track through disparate guitars and sparse drumming. It is of epic proportion, and a bold move so early on in an album; this is the kind of track that would traditionally close an album – in this case, the track is integral to the whole album.

Longer tracks are punctuated with shorter tracks that allow time to breathe amongst the oppressive onslaught of the layered epic tracks. Shame/Retreat is an acoustic interlude after the initial clubbing blow of Failed Skin. Similarly, Loss/Betrayal has an air of Dead Can Dance about it as it breaks up the heaviness again. Self-Mutilation By Fire And Stone again assaults the senses. Guitars duel in a shrill cacophony and the strained vocals add to the anxiety of the album.

Silent Salt is another slow burning track that gestates into something otherworldly in its musicality and style. Loathe/Displace again slips into gothic territory; there is an aura of Dead Can Dance again, but it’s impossible not to think of Bauhaus or Joy Division at this juncture. The band set the controls to ‘sludge’ on The Greae. The riffs are murky, and the drumming again rattles the skull. Guilt/Regret provides time for more introspection before the crushing finale of the title track which has a phenomenal, and probably NSFW, music video to accompany it.

Fed Into The Nihilist Engine has sections that drift seamlessly between serenity and melancholia, whilst most certainly being oppressive and miserable at the other end of the spectrum. Vocalist Jake Harding states “The album is an exploration into our relationship with negativity. The Nihilist Engine is symbolic of our greatest flaw and the self-defeating nature of our species. This machine represents both the inner turmoil of the human spirit and our struggle to understand the darkness spreading from external forces. Self-perpetuating and infectious, these feelings contaminate and spread. A relentless machine drawing us in and chewing up our poisoned remains.” This is an emotive record that is lengthy and challenging. The sum of the influences brought to the table by the members of the band totals something of grand proportions; another solid album release of 2018.
Grave Lines are online here. They can also be found on Facebook.