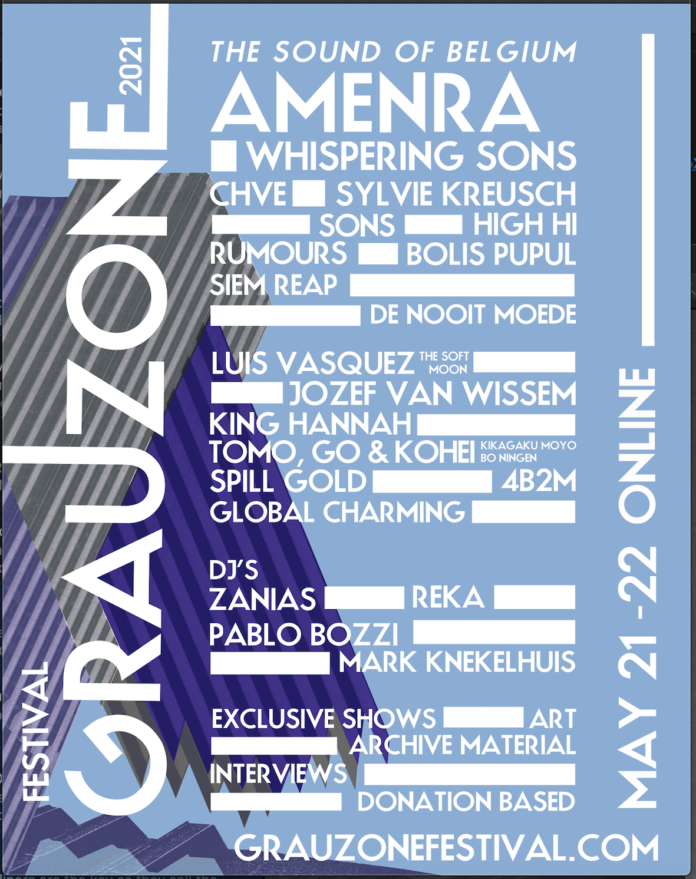 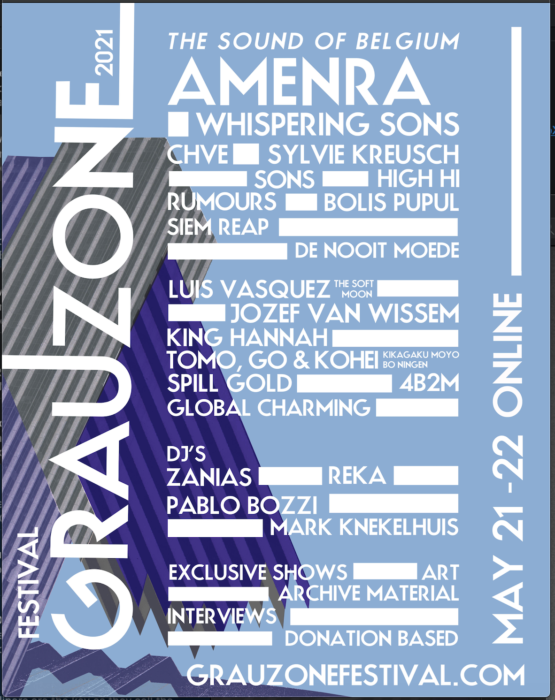 Grauzone is the key post punk, darkwave and cutting edge music festival. Based in Den Hague in Holland it’s built up a big reputation in the past few years with eclectic and well thought out line ups and is a celebration of the form.

This year’s event will be on line because of the ongoing pandemic situation but is still as ambitious and thrilling as ever with exclusive performances by Jozef van Wissem, Luis Vasquez, CHVE, High Hi and King Hannah, among others.

Grauzone can be watched free of charge, but offers the possibility to support the festival with a pay what you want link via www.grauzonefestival.nl and www.paard.nl.

Within Grauzone’s program we present ‘The Sound Of Belgium’ featuring urgent and exciting Belgian acts to which CHVE and High Hi are added. CHVE (Colin H. van Eeckhout) is the frontman of Amenra and plays solo on a hurdy-gurdy in the 16th-century Museum Oudenaarde in East Flanders. The young trio High Hi has already caused a furore in Belgium with the hit Daggers and their dark indie, new wave and shoegaze and made a big impression during Eurosonic/Noorderslag.

The American artist Luis Vasquez, known from The Soft Moon who previously played on Grauzone, will present his first real solo album A Body Of Errors. He combines industrial influences from bands like Ministry with electronic synths. The session was recorded in the California desert and will be shown exclusively during Grauzone.

Composer Jozef van Wissem creates a minimalist modern drone with his medieval lute. He won the Golden Palm for best soundtrack at the Cannes Film Festival for the Jim Jarmusch film Only Lovers Left Alive and worked with legends such as Zola Jesus and Gary Lucas (Captain Beefheart).

The Japanese psychedelic trio Tomo, Go & Kohei (Kikagaku Moyo and Bo Ningen) will play a unique set specially composed for Grauzone. The English singer King Hannah is reminiscent of Mazzy Star with the guitar sound of Kurt Vile. She released her impressive debut EP Tell Me Your Mind And I’ll Tell You Mine at the end of last year.

A danceable DJ-set will be provided by Mark van der Maat, better known as Mark Knekelhuis, and founder of the Amsterdam wave label Knekelhuis which houses De Ambassade, Parrish Smith, Job Sifre. As well as Spill Gold and Victor de Roo (De Nooit Moede) who will both perform during the online edition of Grauzone festival.