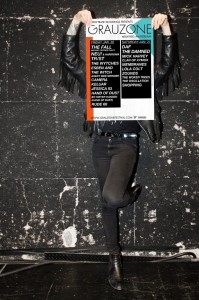 Day two dawned bloody. A disastrous journey home (courtesy of replacement buses) had changed a routine night train trip into a hellish 4 hour piss about with drunks; a return to civilised Leiden that was sustained only by the sort of unguent, processed fat, salt and sugar bomb that masqueraded as a veggie pizza slice. Healthy option? If it had gone cold I could have used it as a bar of soap.

ANYWAY this all meant I felt as rough as a badger’s arse by 10am and in no way up for Saturday’s programme, which was a shame as The Membranes and DAF were playing. Just to rub salt into the wound, The Membranes were on at a time when most rockers would be rising from their pits; 5pm. Still, things had to be seen; and as The Membranes were brilliant at the Cultuur? Barbaar! festival in Leiden (of course they were; I’d fucking booked them for that) it would be madness not to make the effort. I made the effort.

But it’s WEIRD seeing gigs at this time. I think a few people felt that too. Did any of Grauzone’s audiuence actually exist in daylight or were they all still in pumpkin form? Regardless I traipsed up the stairs to the Theatre Room to see The Woken Trees from Denmark, who looked like an amalgam of bands, (rockers and a Fields of the Neph-style Goth guitarist, relete with wide brimmed hat). After a low key, predictably doomy start the band bashed out some very pleasing, occasionally inspired passages of dark rock. The music hinged round slow build ups of layers of metallic sounds and riffs and impressionistic lyrics, which – when examined individually – weren’t all that surprising, but when thrown into the pot would morph into something pretty expansive and widescreen. In a way, it was great film music played with a rocker’s attitude. Imagine a softer Sabs/rocker’s take on the vistas Crime & the City Solution used to set up.

Downstairs for The Membranes. Jesus there is no-one in. Well, 30 people or so. Ach, this is always the way with gigs here; Dutch audiences like to walk in when the first song is underway. And this is what happened, The Membranes strode on, looking determined and confident and immediately decided that everyone needed waking up. Everyone woke up and felt the hairs in their ears melt as the band started to sound like a jet plane that’s being revved up by escapees from a work’s Christmas do. The room started to fill up nicely, and you could see that the new comers were thinking, “what is this enervating racket”?

OK, a confession. Membranes singer John Robb’s a mate. And I’m on very friendly terms with the rest of the band. Really good chaps all. They’ve had tea & biscuits in my house too. We even looked for Tawny Owls together. And if you want to tell me that I’m biased, then please do so. But then, I’m biased because when I was 16, back in the days when dinosaurs roamed East Lancs and Dame Richard Branson sold records in those fast-disappearing things called high street shops, I really liked the whacky, spiky, well-greased and messy world of The Membranes, a band that managed to dodge all the limp-wristed, Merchant Ivory balls of C86 and C87, but dodged everything so effectively that they fell through the cracks, and didn’t get invited to the C88-9 guitar party that in some way they’d sent the invitations out for.
But you know what? All that hassle and low-grade motoring on the Road to Nowhere back in the day is a blessing in these granular, usb-driven, interference-heavy, de-tuned, post-post-modern/industrial times. The Membranes have taken a chance to come back with the collective memory wiped. No expectations. No people turning up and expecting the chicken in a basket heritage rock show. Play The Cutter or I want my money back! Play Love Will Tear Us Apart! Play 12XU and stop with all the new stuff so I can go home! None of that.

And – here’s a thing – an audience preferring the new stuff or not even caring that the new stuff is the new stuff, digging the whole show. In fact the oldies in their set – a buzzing take on Spike Milligan’s Tape Recorder and a stately run out for Myths and Legends were great but relatively unnoticed. Best was the new stuff; people were knocked out by its power and presence.

Let’s talk about the new songs. They are massive in size, huge zepellins powered by grunting, flaring, socket-blowing blasts of granular electronic noise that manage to sound utterly abstract and needle sharp. Remember those old Flash Gordon films with those weird, tuna-shaped space ships La Gordon used to pilot, the ones propelled by blasts of electric flame from the back? The songs sound like those. Things like Money is Dust or Dark Matter (I think those are the names) also sound like short, shocking, heavy rockabilly/punk takes on T-Dream’s Zeit or Alpha Centauri. Fuck me. Deep space indeed, and blacker than the blackest velvet. When the band launched into this steaming raga built round some lyrics “the wind blows hard, the wind blows low” (no idea of its name) the room ground along in utter submission. John Robb ran into the audience, shook hands, said hello, gave the mic to people, somehow inverting the showbizz stuff into a bit of a “back of the bus” laugh. Peter and Nick hammered out these metalic shapes, like two blacksmiths shoeing Odin’s Sleipnir. Rob’s drums sounded like a roomful of looms.

Incredible stuff. I’m telling you, if this music was released by Scott Walker or Mark Lanegan, the chinstrokers would be all over it and there’d be a relentless stream of moody interviews you can’t get to the end of, and limited edition vinyl release thicker than a plate, brought out on a label like Editions Mego. The Membranes may flirt with a cartoony image of themselves but in the words of the Sage of Sheffield John Shuttleworth, don’t be fooled.

Thence to the main hall for the end of Toy’s set who sounded incredible – even if I suspected it was a classic C21st, Dysoned, precision-tooled, controlled take on Pale Saints or Cosmic Jokers. In fact think of the lunacy of Cosmic Jokers as a PLANNED TRIP (replete with maps and sandwiches) and that is Toy’s live set. That I listen to Cosmic Jokers with the toilet door open should confirm I’m a fan, and therefore dig Toy in consequence. They do sound a bit like The Horrors too, in the quality and pitching of their sound; a monstrously rich mid-tempo, mid-octaval [sic!] racket. All over, it was back to the world of Zounds. Steve Lake is making more and more cosmic sense as time goes on. Can’t Cheat Karma and Subvert were great rumbling beasts and Lake’s inspired tap-room rambles caught a fair few on the hop. Something just clicks with them now; they have that classic, semi-acoustic punk sound that defied amplification; but they sound of any time and no time. The ultimate punk take on the Cottage Industry movement. You’d imagine the Diggers would sound like this.

DAF are splitting up. So my views on this gig are in some ways going to be skewed. But sod it, I loved this gig, maybe because I also brought my own memories of seeing them to the show and fed off them too. Songwise we got the lot; everything you would want. At times Gaby’s voice cracked and fixzzled out, no longer alternating between a penetrating boom or spine tingling screechifying. This may have been a bad thing in some people’s eyes (especially if you thought the gig would be the LPs played loud). What I think people forget is that their music can be seen or used as a take on classic German cabaret; especially with the moves and shapes Delgado pulled off, lecturing, declaiming, pleading to his audience. And if you stopped consuming for a minute and tried to engage with the show, you just realised they were two men who had somehow reached their goal and deserved their prize, not this unstoppable machine. The frailty inherent in the public sharing of that admission here made things very beautiful. For sure you could dive into the darkness of Sato Sato and luxuriate in the sensual syrup of Tanz Mit Mir, Ich Wil, or Rote Lippen. But you could also revel in their brittleness and frailty. Even the digital program that had replaced the old tape reels played up (somehow remembering their antecedents’ unreliability). “Modern consumer products” quipped Gaby. Sometimes Gaby hit the heights; like an old biplane crashing through the clouds to meet the sun. Du Bist DAF was magnificently rough and ready here, as was Alle Gegen Alle and Der Mussolini, Gaby wringing everything out for that. He understood. He understood this was it. This was also very evident in the encore of Kebab-Träume and Der Räuber Und Der Prinz, where the whole thing felt like some cabaret singer signing off at a speakeasy. And somehow that made things better here. I found myself in tears and had to hide in a corner.
Off, finally, to watch John Robb interview Steve Lake and Viv Albertine. You know, the symposium was great at Grauzone on the Saturday. John’s opening quip to Viv Albertine “so, Viv have you maturbated yet” was worth the price of admission. After Ms Albertine laying down the law about punk pubic hair it was time to hit the road. What a day.