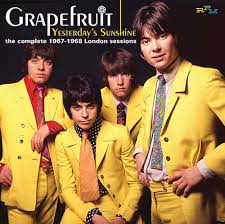 Subtitled “The Complete 1967-1968 London Sessions” this CD charts the early years of Apple Music’s most likely lads Grapefruit with six previously unreleased tracks and new tape transfers…..Ian Canty looks back on the band that couldn’t fail but somehow did…

Though calling any band a manufactured pop act is tantamount to labelling them cads, rotters and all round bad eggs, Grapefruit were the perfect example of how this much hated method of group formation could occasionally go right. In 1967 Tony Doran, a bigwig at the Beatles Apple Music company, pushed three ex-members of Beat also-rans Tony Rivers and the Castaways with a songwriter by the name of George Alexander hoping that magic would somehow ensue. And it did, but…………

George Alexander was a scion of the musical Young family from Scotland, his brothers would helm two of the biggest bands to come out of Australia in the Easybeats (brother George – Alexander was George A’s real first name) and AC/DC (youngster Malcolm and Angus), but he opted to stay in the UK and eventually hooked up with the Beatles’ Apple Music. A fair few years older than his new band-mates, he did however have a great songwriting talent which would be invaluable to the fledgling band. John Lennon, who had recently hooked up with Yoko, seems to be credited with naming the band after her book “Grapefruit”. The Fabs links would keep on coming but did their patronage help or hinder them? Hmmmmmm

Many of the tracks here went on to be featured on their debut album “Around Grapefruit” but by that time Beach Boys producer Terry Melcher had put his stamp firmly on the band, which was okay in itself but lost a bit of their personality on the way. These circumstances provide the necessity for this collection of tracks set on tape before he got his sticky mitts on them, although he did produce their debut recording “Dear Delilah” featured here. That song did give them a brief taste of the kind of fame they looked destined for by hitting the top thirty in 1968, the tune itself is one heavily phased pop-sike beauty, exactly the kind of thing Jeff Lynne would sell his best shades for.

It didn’t look like Grapefruit could fail but like a lot of things involving the Fabs at that particular time they did – along with perhaps not using their strongest material in the wisest of ways, there was also the tendency in the press to always consider anything Lennon and/or McCartney had been anywhere near was all their own work and they should received all the credit too (“Lullaby” was a rare production by the twosome). Grapefruit were unfairly seen as puppets and left Apple during 1968 to distance themselves from Beatlemania. Also fashions were changing so quickly on the UK music scene and in the time between recording and release of their records they already sounded outmoded to the incoming heavy crowd, their more finely crafted nature now a drawback rather than a plus.

This doesn’t matter now of course given the passage of time and what we are presented with here is quality dream-like late 60s pop that occasionally has the odd freakbeat style guitar break or orchestral moment. Bucking that trend slightly, “Theme For A Lonely Queen” is a delicate instrumental which keeps threatening to turn into “House Of The Rising Sun” but doesn’t, but for the most part Grapefruit retain the summer-pop template that they perfected. Highlights include “Another Game” with its insanely catchy “See-Saw” chorus, a Motown inspired stomp in “Sweet Little Miss No Name” and the gentle “who the hell let Pete Frampton in here?” vocodor on “Theme For A Lonely Queen” and a yearning “Someday Soon”. There is plenty here to enjoy for fans of “Odyssey And Oracle” era Zombies and the Kinks more pastoral moments or pop-sike devotees.

After these recordings were manipulated by Melcher into the “Around Grapefruit” album line-up changes saw the band morph into a more heavy rock kind of outfit and “Deep Water” which followed in 1969 provided evidence of this shift. But it was a different band by then to all intents and purposes and this compilation shows Grapefruit at their ornately rendered, Baroque Pop best. Perfectly constructed and full of graceful beauty, if you can forget those lemon suits!