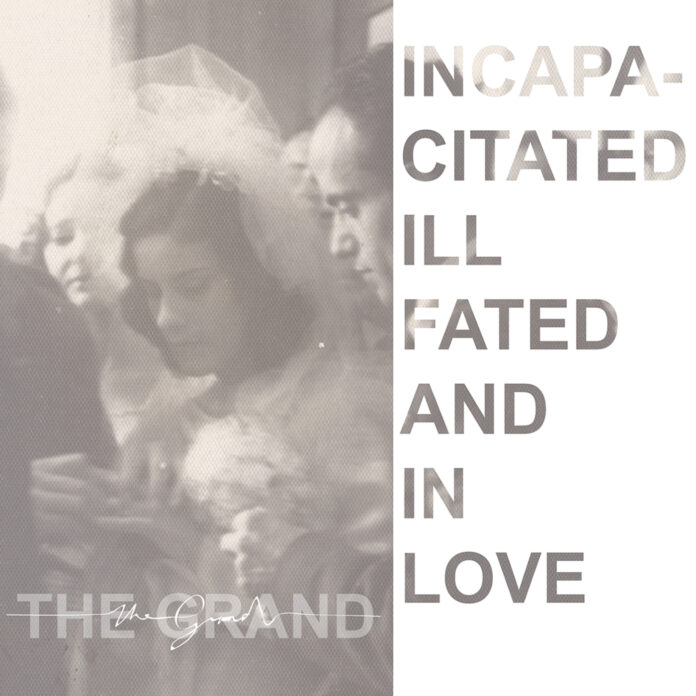 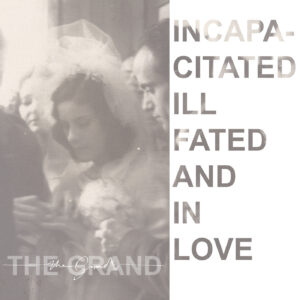 The Grand – Incapacitated, Ill Fated and In Love (Philophobia Music)

Wakefield’s “transatlantic pop” band The Grand have a new album out which Sean Hornby reviews for us below.

The Grand are a band that I was lucky enough to see live a few months back and without wanting to venture into Spinal Tap territory I remember being knocked out by their exuberance, raw power and probably their punctuality but if truth be told I wasn’t really mindful of punctuality as I was busy supping my pint.

The Grand are a trio from the rather wonderful city of Wakefield and it’s (the band not the city) made up of brothers Russ (lead singer and bass player) and his brother Tom who wrestles the electric guitar. Andy is their mate, he bangs the drums. They’ve been smouldering amongst the local music scene for some time now and have been championed by the likes of BBC 6 Music with a sound described as “transatlantic pop” although to be honest the band sound somewhat darker and edgier than this, not that there is anything wrong with that kind of stuff if you know what I mean.

They’ve cited their influences as The National, Nick Cave and Sun Records-era Elvis and with their debut they’ve somehow managed to create 10 songs that nestle comfortably next to one another whilst managing to create a somewhat abstract collage of sound. Opening with a three-pronged pop attack the album manages to sound effortless, familiar and rather welcoming.

Front loading the album with warm and majestic sounding should be hit singles is a smart enough move but behind the shimmering taste of summer are songs of love and despair. So, opener ‘Romance Is Dead’ fools you into thinking it’s the band putting all their cards on the table and giving you a heads up for what’s in store. Except, this isn’t quite true. We’re not heading into doom rock territory but as mentioned already there’s a sombreness that seeps throughout the album’s 10 tracks.

Second track, ‘A City That Loves Me’ makes glorious use of brass and gorgeous female harmonies, a cliché perhaps but it’s the stuff that live music was made for, festival fields a go-go. The marvellously titled ‘I Don’t Want To Make You Happy, I Want To Make You Cry’ continues the theme of love and loss, probably the most common theme in the history of music but The Grand make a fair go at giving the subject matter a new sheen.

Vocalist Russ comes across as a West Yorkshire Win Butler meets Sam Windett from the Archie Bronson Outfit, it’s certainly a distinctive vocal and is complemented well by the other core and additional musicians that feature throughout the album.

‘Hurt Me’ and ‘Why Don’t You’ are further examples of the band’s prowess for writing anthemic pop songs whilst the album closer ‘Evening Fell, The Curtains Close’ shows another side to them with a somewhat bleak desolate Joy Division wasteland ambience. Highlight of the album though is ‘Eating Out Of His Hand’, a level of urgency is contained within its short life and I’m not embarrassed to say that I punched the air after hearing it for the first time.

The album has been grown and nurtured in the independent Greenmount recording studios and they’ve managed to conjure up a classic sound to boot. Having taken their time over the recording of their debut they’ve created an album that sounds neither forced nor rushed and because of this it’s clearly been able to grow at its own pace. There’s no reinvention of the wheel here, what The Grand have created is an album that stands on its own, unpretentious and despite the at times Americanised feel it never sounds like it’s trying to be something that it’s not.

To summarise this is a more than fine pop/indie/rock album that deserves to be heard by the masses, I hope this is the case because The Grand have released an album that should be featured in all of those end of year album polls.

All words by Sean Hornby. Sean can be found on Twitter and his Louder Than War archive is here.