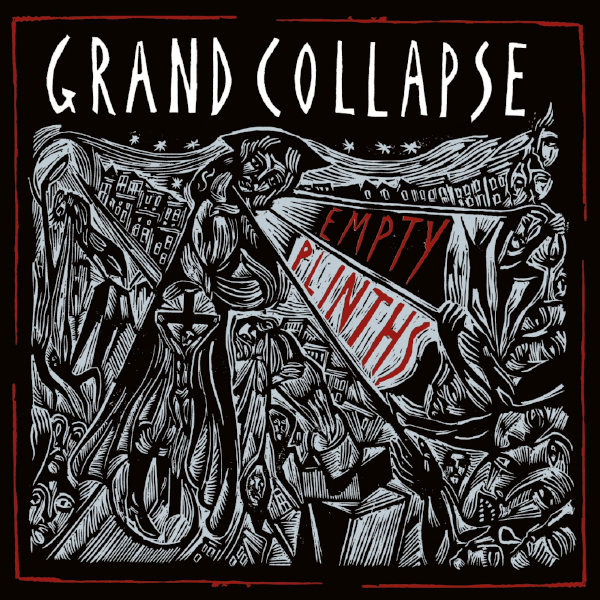 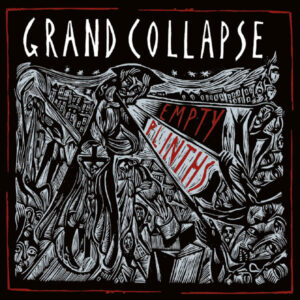 The third album from much loved and acclaimed DIY hardcore punks Grand Collapse takes us on a frantic journey through a crumbling society and knife edge emotions. Nathan Brown says this is no “difficult third album” but a demonstration of why they are still a highlight of the UK DIY hardcore punk scene.

Empty Plinths. Statues torn down. With a Bristol base, of course Grand Collapse would be influenced by the ripping down of that statue of slave trader Colston. The amazing woodcut cover art by John Abell that is now part of GC’s visual identity celebrates its toppling and to my mind its rendition in that medium places it alongside historic uprisings and rebellions such as the Poll Tax Rebellion of 1381 and The Diggers.

My description of Grand Collapse as “High octane, melodic, angry, hardcore political punk” in a review of their previous album still stands. As ever, Grand Collapse are propelled by the relentless galloping machine that is Glenn behind the drum kit, ably partnered by newest member, Blag, on the bass. Glenn’s drumming still always impresses me. It’s not just the speed that he maintains. It is the number of beats he fits in that speed and cheeky little extras he chucks in.

Calvin screams himself hoarse as he addresses the personal and the political. Combine the lyrics with the delivery and it is like cathartic therapy, a ball of emotions being let loose in an explosion. Anger and lament combined. Railing against injustice and abuse to animals and humans alike, and the perpetrators. Pausing to reflect on personal events and feelings.

One noticable change in the sound is a heightened metal influence on the guitar. Not just what Jon’s playing but the tone. There is more crunch, of the sort that crossover bands such as Cro-Mags would be happy with. Melodic twangs and heavy palm damping, speedy riffs that power along. It is tempting to cite Propagandhi as pioneers who ploughed this furrow but Grand Collapse have their own identity which continues to bear fruit. They sculpt tunes, melodies and a soundscape that deserves the evident high production values.

3 albums in and with years of dedicated touring under their belt, it seems crass to compare Grand Collaspe to others. They have a clear identity of their own so let’s be clear: This sounds like Grand Collapse with perhaps the metal dial turned up higher than before. It’s all the way up to 11 for Without Let or Hindrance, which is full on Slayer tribute and there is a heavy nod to thrash metal on Amygdala and National Detective Programme. Meanwhile the song Empty Plinths features sauntering basslines that draw on Sabbath. Do not fear though, this is still a hardcore punk record.

As before, the song lyrics are more akin to short stories or vignettes – poems rather than songs. Opener Waves hits you with a very human and poetic take on the plight of refugees and the inhumane response from some in this country. “No hope at the end of this arduous path where morons wait with a scowl in staunch defence of ‘our’ exclusive haven. Perfect bliss for the megalomaniacs and jingoist”. It’s a theme they return to partly when they use a phrase from UK passports as the title of Without Let or Hindrance which addresses those same people who still hold antiquated views and aspirations of empire.

They appropriate more words to effect in National Detective Programme. Much of the song uses words taken from a UK police website encouraging the public to inform the police of any unusual activity in their community. I seem to recall there was a billboard campaign too. GC then offer up some analysis of this Stasi-inspired tactic “Thinly veiled; rat on your neighbours. Pick up the phone and have a nice chat with your newly appointed criminal pact.” 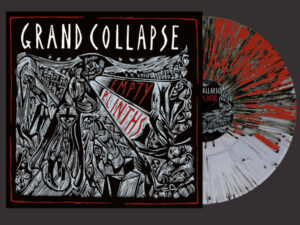 Amygdala utilises horror imagery, describing the impact of a nuclear bomb from the first person perspective. “Feel the burning from the fallout. Faces melting in the street” they bring in imagery of angry deities. The song ends with “Please tear out my Amygdala!”. This is the part of the brain where emotions are processed and turned into memories.

Claret Thirst attacks the arguments of conservation and the like made by people who kill animals for fun. I love the fact that it doesn’t bother to address those arguments, instead dismissing them for the lies they are. “Spare me the bullshit…It’s just a cover for your savage beliefs; for your blood-thirst”.

Empty Plinths seems to be part reportage, part futurist aspiration. “Can’t quite believe how bad things got before the pull back when finally it snapped and shattered into bits and peasants held up shards above their heads”. After listening to the album you’ll be in the mood to tear down some monuments. But before you rush out, a secret track takes a song familiar to anarcho-punks to the next level. Their rendition of Fucked Up State is an intense and fitting tribute to Calvin’s father Stig, who first wrote and performed the song with Icons of Filth.

“Difficult third album” is a well worn trope, but on their third full length outing Grand Collapse faced no difficulties. They remain a force to be reckoned with that keeps developing in intensity and demonstrate they are no flash in the pan. Still a highlight of the UK DIY hardcore punk scene.

Pre-orders live now from TNS or the band in a range of colours.