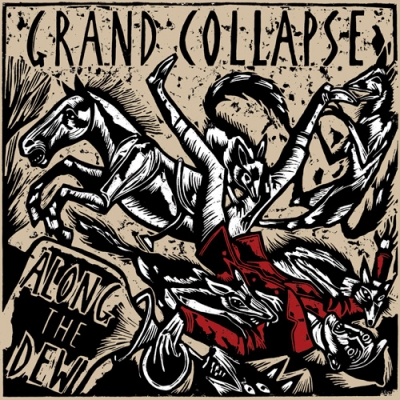 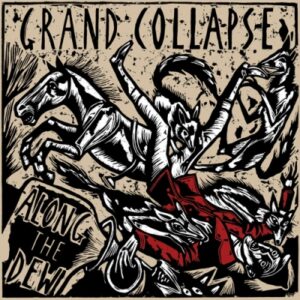 The new frantic album from Grand Collapse gets a listen from LTW’s Nathan Brown, arguing they are the best current hardcore band the UK has to offer.

How to introduce Grand Collapse to the uninitiated? “High octane, melodic, angry, hardcore political punk” would be a start but does not do them justice. Drummer Glenn and bass player Dave provide the foundations – breakneck tempo with the urgency of a horse galloping. Frantic drumming and a chunky bass sound. A side of the LP roars past and doesn’t give you time to register that 6 songs have passed. You just pick yourself up, shake your head, say “What just happened?” and flip this beast over for more. John’s guitar combines a mix of intricate, melodic picking and breakneck riffing with plenty of super-chug and the occasional nod to the heavies of yesteryear like Sabbath and AC/DC. And Rush. He would not forgive me if I failed to mention Rush. And then singer Calvin delivers his aural assault. Half shout, half scream. Not a deep guttural roar, not quite “screamo” but veering into the higher register with a deep undertone. Somehow maintaining ferocity without becoming hoarse. Ed Miliband, do not even think about trying it!

When you put the ingredients together, raging is the word, but with stoppy start bits and little flourishes. I wouldn’t be the first to draw a comparison with Propagandhi’s faster output – this applies equally to the sentiment as to the sound. Fast melodic hardcore for political punks.

In recent conversation with fellow acolytes of the DIY punk and hardcore scene we came to agreement that GC are probably the best band the UK has to offer right now. And they straddle the line between the worlds of spikey punks, crusties, jaded anarchos, angle haircutted emo lovers and check-shirted hardcore kids. Not an easy feat. But it’s not just great tunes, manic playing and excellent lyrics. Grand Collapse are of the scene. They aren’t some media hyped bullshit. You see them at other people’s gigs acting like lunatics. They can be found driving other bands around. They are hard working and seem to be constantly on the road, wherever they go leaving friends. This is probably what endears them to so many. And they make it look easy….bastards! It’s no wonder both Bristol and Cardiff want to lay claim to them as prodigal sons. Consequently this album has been hotly anticipated, featuring songs the band have toured, refined and honed over the last 3 years. It does not disappoint.

While mostly political, the 11 songs on this LP are more poetic than polemic – observation and reflection rather than call to action. They read like short stories weaved together to make the point. The title track made me chuckle, even though I knew what was coming from the amazing cover art illustrating the fable: huntsman comes acropper at the claws of woodland creatures, one of them even running off with his hunting horn. Love animals, hate hunters!  The woodcut cover, like their first full length offering, is reminiscent of the work of Clifford Harper, placing this as another segment in a fine anarchist tradition.

There is a big Fuck You to the Border Agency: the prison camp guards for asylum seeker detention centres. The GC lads had a run in with the law thanks to one BA employee (the “Turncoat” of the title). A long story. Retold partly in song. Arms traders and their government sponsored trade fairs are brought into focus in “Omission”: “The newest edition with one key omission; they seem to have left out the images of kids holding guns, of cities on fire & mothers in tears”. Other songs concern the death of game hunting vet Luciano Ponzetto who posed with a dead lion (“The prick had it coming”), fighting fascists and domestic violence.  Yes, this is an angry band.

In keeping with the general aesthetic, Ruin Nation have given the first 1000 copies a marbled red vinyl treatment. I predict they will fly out so get your order in quick.

Available direct from Ruin Nation (includes digital download) and also in the UK from TNS Records and Urinal Vinyl.

Unabashed enthusiasm by Nathan Brown. More from Nathan can be found over at his Louder Than War Author Archive.