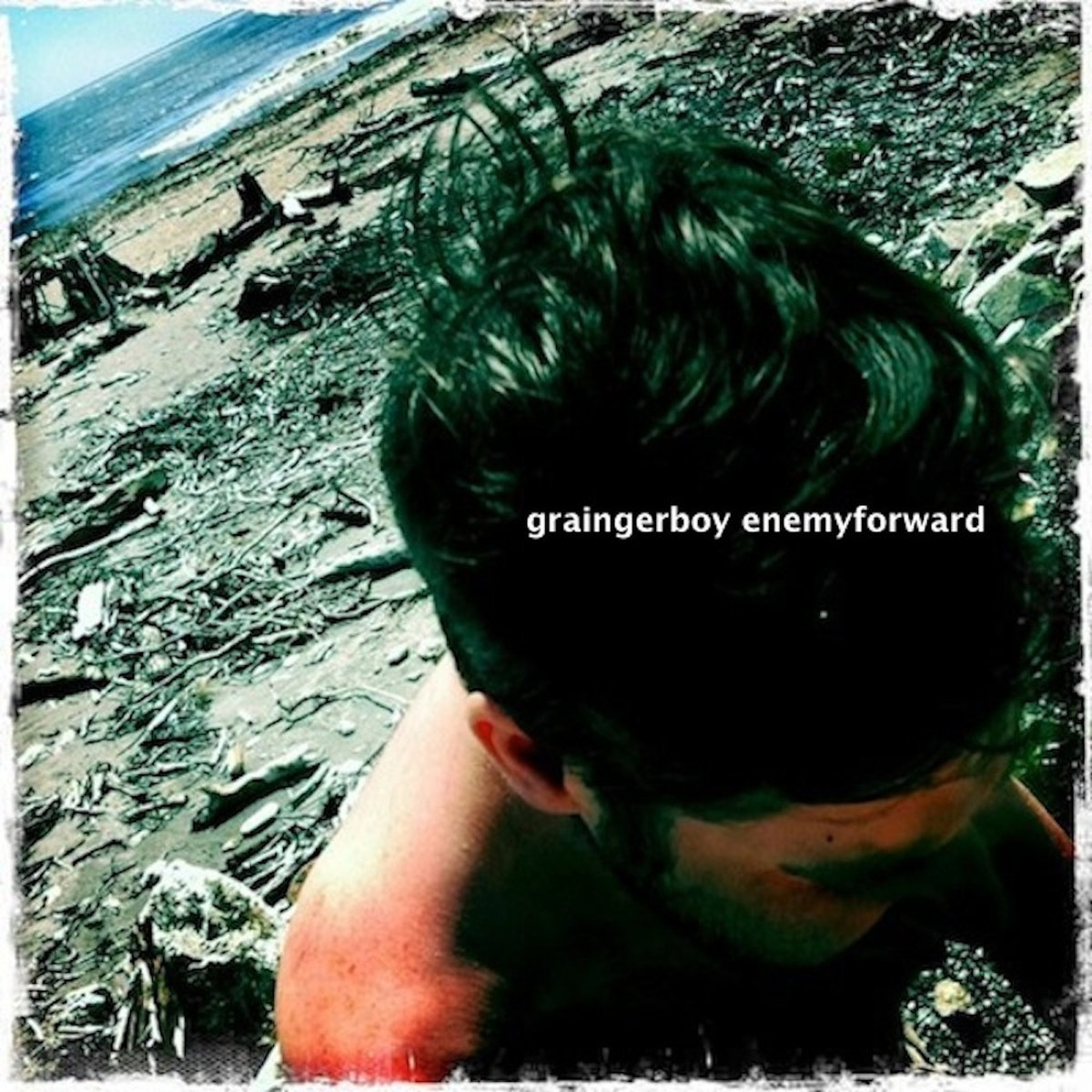 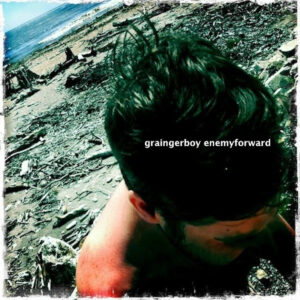 ‘These Days of Yearning’

A Journey into Graingerboy’s ‘Enemy Forward’

I was a pretty steadfast, single-minded child. Growing up, I hero-worshipped Desperate Dan in The Dandy; I chuckled along to Kenneth Williams and Hattie Jacques in the Carry On movies (although I rarely understood the dirty jokes) and I idolised Green Gartside, Phil Oakey and Martin Fry in my precious vinyl record collection. I was satisfied with my lot. I was content. As far as I was concerned you could keep your pompous Captain America, your dumb Airplane movies and your corporate Michael Jacksons, Cyndi Laupers and Bruce Springsteens; I wanted my entertainment with a distinctly British sensibility. I guess I’ve always been patriotic about home-grown culture, particularly when it comes to music, and more specifically the electronic variety. The Human League, Heaven 17, ABC, Pet Shop Boys and Scritti Politti provided me with the musical canvas of my early teenage years – beautiful beats, lush arrangements, whimsical words and an intelligence and beauty that I just didn’t find in their American counterparts.

When I went to university in the early-90s I was briskly embedded in a world of rave, house and trance – all-enveloping music that could make you feel both euphoric and melancholic in equal measure (an especially rare trick which ABBA copyrighted two decades earlier). The way dance acts like BBG, Love Decade, The Space Brothers, Chicane and The KLF made me feel was spine-tingling and intensely liberating, setting me on a personal voyage of dance, sex, drugs and love. And today I always return to British electronic music if I feel the need to re-connect with myself.

One of my favourite trance anthems of all time is ‘Revelation’ by Electric Boutique. Released on the Data label in 1999, it was one of those landmark tracks which drew hedonists to the dancefloor like a musical magnet; its darkly hypnotic beats echoing like the footsteps of a latter-day Pied Piper. I confess I knew nothing about Electronic Boutique; who they were; where they were from. But ‘Revelation’ just felt intrinsically British to me. It was only 18 years later that I learnt that 50% of the group was…. Simon Grainger, a multi-talented musician and vocalist, based in Leeds, who, under the name ‘Graingerboy’, released his captivating third solo album, ‘Enemy Forward’, late last year. It’s an autobiographical candy box full of introspective and cerebral songs – a piquant mix of the quirky, the uplifting and the deeply intimate.

The album opens with the addictive 21st century Elizabethan fancy of ‘Three’ – which (perhaps not totally unconsciously) references the iconic early-80s’ feel of Orchestral Manoeuvres in the Dark and Yazoo, and augments it with a deceptively honeyed chorus, and some tasty euphoric Euro flourishes – immediately establishing Graingerboy’s primary skill: as an effective and esoteric storyteller, who builds an intricate nest of music and words around him. However, ‘Three’ merely whets the appetite for the unadulterated pleasures yet to come. Second track, ‘Saturnine’, treads that almost-impossible dance narrative of sadness and joy, creating a song which you both want to listen to in the dark, broken-hearted solitude of your urban bedroom, or lounging beside a blissed-out sunset over-looking Ibiza’s Es Vedra. It is, unquestionably, the collection’s finest cut; a song so dreamily and exquisitely constructed that even after multiple listens it continually surprises and confounds. A song of loss, and hope, performed with enormously delicacy, ‘Saturnine’ is, for me, one of the most elegant pieces of British electronica I have ever heard in my entire life.

But it would be wrong to imagine that ‘Enemy Forward’ has blown its money shot so early on. The album challenges and enthrals throughout. The complicated drum-and-bass-tinged trance of ‘The Difficult Lies of Us’ points to alternate reality of passion and its deadly consequences, and exposes Graingerboy at his most stutteringly vulnerable. “It’s not what I was told,” he opines, referencing the dashed hopes, disappointment and deceit we all, sadly, endure in human relationships. ‘The Difficult Lies of Us’ is the musical equivalent of the bitter, hurtful conversations we have all experienced in our lives. Somehow, Graingerboy has the precision of painting emotion in devastating starkness. “I’ve got aches and pains and you’ve got all the charm” he tells us in the cheekily-titled ‘Trainers’, where sneakers act as an inspired euphemism for longing and desire. “You need trainers like you need new shoes. And I need new shoes like I’m needing you.” The song ultimately catches you unawares, and after its full six minutes and 17 seconds your face could well be, unexpectedly, stained with tears.

I should warn you here, ‘Enemy Forward’ is packed with raw emotion, and its themes have resonated with me ever since I first listened to the collection last year. A mixture of ambient, indie dance and ‘Brit-Baleria’, Graingerboy’s ‘ShadowFormerSelf’ will ring true with anyone who has experienced physical or mental health issues, yet it is oddly ameliorating, rather than anguished. “What if I crumble. What if I fall on my knees. What if I breakdown, forget to breathe.” In particular, try to check out the Deuce & Charger mix of this track which transports Graingerboy’s unique sound to a deserted Cornish beach in August, the saltwater gently lapping at your toes. Believe me when I say ‘ShadowFormerSelf’ is a song not easy to forget. It is an absolutely stunning piece of work.

Hope and hedonism are pushed to the forefront of ‘LushLife’, an anthem-in-waiting and probably the most quietly euphoric tune on the album. The song wouldn’t have felt out-of-place in a backstreet Berlin or NYC nightclub, circa 1980, and, strictly speaking, with my filmmaker’s hat firmly on, I think it would lend itself superbly to a movie soundtrack. Full of dreams, ambition and beatitude, it is one of the most satisfyingly fanciful tracks displayed here. ‘Enemy Forward’ closes with ‘Cold Town’, bringing us back down to the mise en scène of the collection; rich, heartfelt synths, perceptive lyrics and an almost-diagnostic feeling of optimism and faith. “This feeling won’t last for ever,” Graingerboy sings, and this enormous, epic song allows us to wallow in the feeling that all things resolve themselves eventually. The opening Kate Bush-infused piano heralds the painful journey’s end; the beginning of a radiant future. Love overcomes and life forgives.

I am not exaggerating when I say Graingerboy is a musician of enormous power and depth; a true British classic, if you like. Boasting a lyrical expanse of human feeling that Tennant and Lowe would be proud of – coupled with unashamedly gorgeous music – the luscious, multi-layered, intelligent and deeply affecting ‘Enemy Forward’ is quite simply everything I love about British electronic music. Everything.