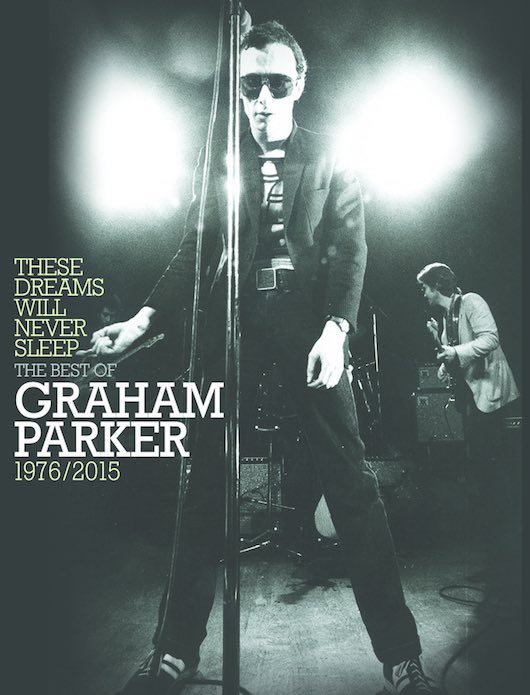 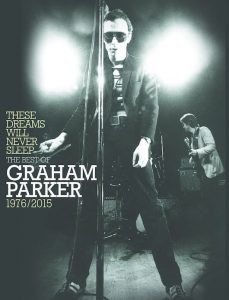 Career retrospective from Pub Rock’s angriest man Graham Parker, spread over 6 CDs with a DVD featuring a live set at the Brook Southampton from last year’s final tour with the Rumour…LTW’s Ian Canty looks at 40 years of Camberley’s very own Punk Soul brother…..

It wasn’t very promising on the face of it. A resentful 25 year old garage pump attendant with a run through the 60s from Mod to Hippy behind him and a headful of dreams about Van Morrison and Dr Feelgood, matched up with what might have been the cream of the Pub Rock scene. But this was after all of their respective bands had singularly failed to make an impact, so together, in 1976, they stood at the doors of the Last Chance saloon. What wasn’t expected was that with their musical power allied to the petrol pump punk’s lyrical smarts and alarming stage presence, they would blow the doors off the hinges. Ladies and gentleman, I give you Graham Parker and the Rumour.

I’ve always thought that Graham Parker and the Rumour occupied a similar position with regard to New Wave that Eddie and the Hot Rods did to Punk in that they both had most of the elements that made up the coming scenes way before they coalesced into a “movement”. But unfortunately being ahead of the crowd and lacking a few of the style accoutrements meant it counted against them rather than helping. Parker’s influence on Elvis Costello and Joe Jackson is clear to see, but while both of those cleaned up chart-wise he was more or less left behind and never truly accepted as being part of things in Year Zero, despite signposting the way for many.

There is a lot to get through here, so I’m going to start with the basics. The first three CDs break down into the various epochs of Parker’s career, with the first compact disc spanning the early years from 1976 to 1978, the second 1978 to 1981 seeing the break with the Rumour and the early solo years and the third 1992 right up to 2015, which features his low-key American rcordings along with the reunion with the Rumour. Moving onto disc four we have a set of BBC recordings, an “In Concert” from 1979, with 14 tracks that includes the bulk of “Squeezing Out Sparks”, followed by four songs from an earlier “Sight And Sound In Concert” in 1977.

Disc 5 and 6 document the last ever show with the Rumour at the Forum London and the DVD has the entire set from last year at the Brook Southampton, along with 13 other 1970s BBC TV recordings from “The Old Grey Whistle Test”. This collection also comes with a 36 page book, poster and three postcards.

With releases such as this you have to consider what is there new for hard-core fans who, lets face it, would be the main folk interested in a high-end production like this. I can’t imagine many people would shell out for a boxset by any band or artist at whim. So to note what is actually new to general availability, it comes down to the final show from Shepherds Bush enshrined for posterity across two discs, the BBC live disc plus the DVD. Some of the fans of Graham Parker and the Rumour’s 1970s heyday might have missed out on his later recordings presented on CD3 and the 1976 demos are new to my ears too. So a fairly good haul of unreleased or rare material with a high standard audio quality, which isn’t bad at all as things go.

It is a bit of a shame that the book that will accompany this set was not available for perusal when this review went to the on-line equivalent of “going to press” (though I understand that it has reflections from Graham in conversation with ex-“Cappuccino Kid” Paolo Hewitt), so I can’t really comment on whether or not that has any great insights and also for the same reasons I cannot tell you on what the other packaging is like either.

So that is what you get for your money, so lets have a little look at the contents in a bit more detail. The first selection begins with the aforementioned 4 demos recorded solo with only a guitar for accompaniment, with a little harmonica – the impact of these recordings has diminished over time, these days you can’t move for embittered acoustic singer songwriters without a backing band, but back in 1976 an acoustic guitar meant gentle musings, not bitter recriminations. This makes these tracks special. These may be the very demos that perked up Charlie Gillett’s interest and were broadcast on his famed BBC London radio show, but frustratingly I can’t confirm that at present for reasons explained above.

Parker is full of fire early on as that was what set him apart initially and that continues with the following tracks featuring his first collaborations with the Rumour – it is something I have thought for a while but as well as influencing the kind of intense New Waver that was everywhere a year later, also the Soul vision served up by this vocalist with an edgy attitude may have had an effect on a young Kevin Rowland when he came to put together Dexys Midnight Runners. The single version of “Soul Shoes” seems to me to give a little evidence to that theory anyway. Though scoring a hit in 77 with a cover of the Trammps’ “Hold Back The Night” it is not included here in its original single form (though it does feature on the 2015 Forum recording – an effort has been made here not to duplicate the tracks too much, which does tend to happen a lot on larger box-sets).

By the time Parker had split off from the Rumour on the tracks on disc three he had settled into a more down-home, rootsy sort of direction (though obviously not a million miles away from his root influences in the first place) and had located to the USA. His lyrical sharpness had not been blunted though and his subject matter still addressed his home country acutely as “Nation Of Shopkeepers” and “England’s Latest Clown” attest. Towards the end of this portion the very rewarding reformation with the Rumour shows up well too.

The DVD features a full live show at the Brook Southampton from the final tour and one that I was lucky enough to be present at myself….Parker jokes that the Brook is “a pub” but really it was the ideal place to see him and the Rumour, especially bearing in mind their Pub Rock roots, being one of the best small(ish) venues around. The band are relaxed and on razor sharp form, Mr Parker working the crowd with the natural ease of someone who can see the end is in sight but is determined to enjoy the ride. The BBC appearances from “The Old Grey Whistle Test” are the vital archives you would suspect, so the DVD on the whole does deliver nicely.

The final gig starts off at a sedate pace with “Howlin’ Wind” and continues on with some good material from the recent “Mystery Glue” LP but it really picks up momentum when we reach 1977’s “Stick With Me”. They don’t exactly roar through the material but that was never their way in the first place; it was always the way with GP and the Rumour having a balance of anger and intensity against moments of introspection and gentleness. By the time they hit “Local Girls” on disc 6 they really are on a roll, recalling their 70s pomp in true style, with added crowd participation too. There is a gradually building sense of occasion that means by the time we reach the rapturous version of “Soul Shoes” at the very end you can feel that history is being made.

So there it is – a thorough survey of one of the vital live forces on the 70s music scene right up to the 2015 curtain call. To me it is very clear this set has been put together carefully and with an eye to the fans who are catered and rewarded for their loyalty with a lot of rare material sometimes at the expense of the “hits” – and this is something I don’t have a problem with at all. That is exactly how it should be, no true fan wants exactly the same recordings of the same songs they already have and with this box they have kept that down to an acceptable level. So in conclusion it all adds up to a fine summary of one of the UK’s best unsung heroes.