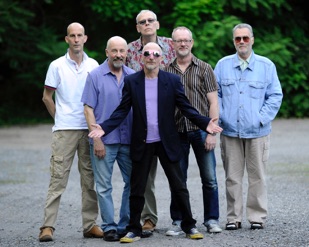 Graham Parker And The Rumour

One of the best bands Britain has ever produced close the second chapter of their history with a bang. Louder Than War’s Craig Chaligne reviews

So that’s it, the final hurrah for Graham Parker and The Rumour ? The final tour, the last show ever ? Well if it is, they certainly went out with a bang. After regrouping in 2011 and issuing the excellent “Three Chords Good” LP, the band started touring again and even released a second album “Mystery Glue” this year. Alas, all good things must come to and end and the London show at The Forum was billed as the last Graham Parker And The Rumour show ever. After a nice opening set by Tristan Mackey, GP and The Rumour graced the stage of The Forum at 9pm sharp and launched straight into Howlin Wind from their 1976 debut album  which was followed by “Stop Cryin’ About The Rain” from Three Chord Good. The way the new songs blended in with the old ones is a testament to the high quality of the material on their last to albums. “Long Emotional Ride” sat comfortably between “Thunder And Rain” and “Get Started, Start a Fire”. “Pub Crawl” and “Railroad Spikes” from Mystery Glue proved what a  fine piano player Bob Andrews is and the soulful “Wall Of Grace” showed that Graham Parker can still pull a catchy pop single out of the bag at will.

The Rumour are the “Rolls Royce” of the backing bands, the only equivalents of a such cohesive unit behind a singer songwriter would be Bruce Springsteen’s E-Street Band or Tom Petty’s Heartbreakers. The rhythm section of Andrew Bodnar (bass) and Steve Goulding (drums) grooved like there was no tomorrow and the guitar interplay between Brinsley Schwarz and Martin Belmont was nothing short of fantastic with Brinsley taking most of the solos while Martin threw in the odd twangy lead guitar but mostly played rhythm. The two work well together despite having two completely opposite stage presences, Brinsley being as placid as Martin is animated. A rather blinding “Back To Schooldays” with an excellent Schwarz solo was followed by the ever popular “Local Girls”. The band was then joined by their 1977 horn section (minus saxophonist John “Irish” Earle, who is sadly not with us any more). If the show was great, the brass section definitely put it up a gear. Parker joked that they were back to 1977 speed after an urgent version of “White Honey” and “Heat Treatment” could have been lifted straight from a Motown Greatest Hits.

An extended four song encore started with an acoustic rendition “You Can’t Be Too Strong” with just Bodnar and Andrews accompanying Parker. The whole band then came back and killed it with a triplet including “Ask Me No Questions”, “Hold Back The Night” and the anthem “Soul Shoes”. Gig of The Year, yes I think so.