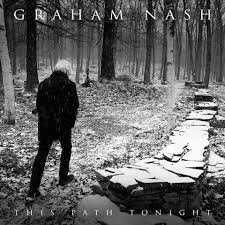 First solo album in fourteen years for the most American of English musicians. Louder Than War’s Craig Chaligne reviews.

Graham Nash seems to have taken inspiration from his former colleague Neil Young. After parting ways with Susan Bennett, his wife of 38 years, he also seems to have severed his ties with David Crosby, closing a musical alliance dating back to 1968. In the midst of all this life reshuffle he found the time to record the successor to his 2002 solo album “Songs For Survivors”. Written and recorded with the help of former Bruce Springsteen and CSN sideman Shane Fontayne, the album isn’t a tremendous departure from Nash’s previous work, the songs are good but you won’t find any earth shattering moments a la “Our House” or “Military Madness” on “This Path Tonight”. However what you get is a fine collection of tunes recorded with taste and showing that going solo again might have been the right thing to do for Nash after all the false starts of the now shelved CSN covers album. Starting with a title track that stylistically wouldn’t have been out of place on CSN’s “Daylight Again” LP , the record then takes a rootsier turn, displaying an under produced quality that coupled to Nash’s still very strong vocals make for a pleasant listening experience. Even the least memorable tracks (“Myself At Last”) benefit from the craft of more than 50 years of songwriting . The former Hollies frontman remains at his best when attempting songs with catchy choruses (“Another Broken Heart”, a cousin from 1982’s “Wasted On Way”) reminding us that he was always the one that came up with the singles in CSN, but sounds less convincing on the angrier moments (“Fire Down Below”). The sprightly “Target” is an excellent love song featuring some nice harmonies. Reflective in tone on tracks like “Beneath The Waves” and”Golden Days” Nash seems to look back on a life well lived. The last song “Encore” would be a fitting coda to his discography. Graham has embarked on a lengthy world tour to promote the album which will be hitting the UK next month.