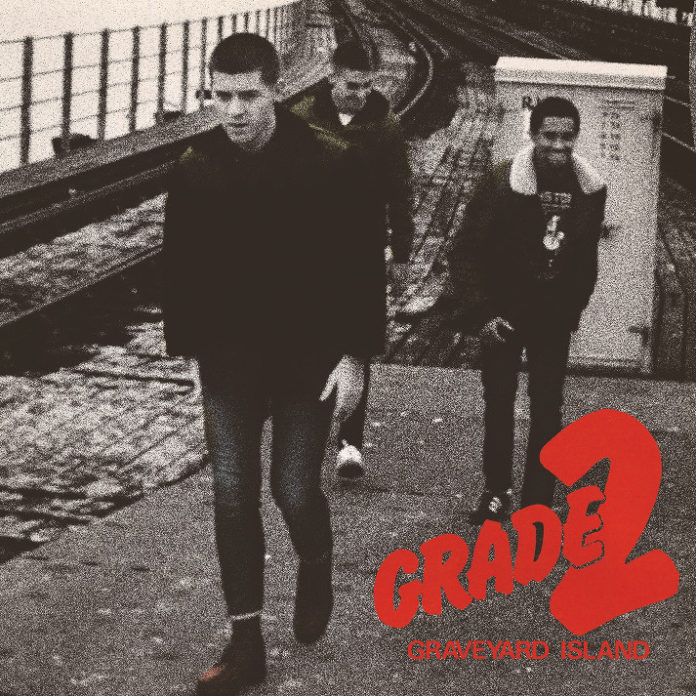 Last time I saw Grade 2 it felt as if they were moving away from their street punk/Oi! roots in what I can only call a mod direction and seemed to have lost a bit of their punch as a result.  On this, their third album, they have re-discovered the punch and have plenty of “bounce” to go with it. The first few tracks and some of the later ones on the LP display plenty of early punk bands in their DNA, but with an injection of modernity. I’m hearing the influence of the Upstarts, Sham, Sparrer. The list could go on.

I grew up in a seaside town, seemingly disconnected from the world. I’ve been to the Isle of Wight. This may give me a different perspective from all them city slickers when I listen to the words Grade 2 sing. Whether intended or not, I can hear the band’s frustrations with parochialism and an island mentality (quite literally in their case). It is not our best look, Britain. And, like many before them, you can tell Grade 2 need to break out and leave that town behind.

Having been spotted by anglophile Lars Frederiksen on tour, Grade 2 landed themself a deal with Hellcat and none other than Lars’ mate Tim “Time Bomb” Armstrong in the producer’s chair, and Kevin Bivona of The Interrupters at the mixing desk. So how do the 2 cultures gel? Not so bad, it would seem. After all there seems to be a love affair with British street culture from some of our cousins across the Atlantic.

The whole release has an impressive sound: lovely crunchy bass, the toms on the drums are particularly noticeable, crisp guitar lines and tone topped off with a very British vocal delivery – for the most part. I don’t necessarily believe a good producer alone can make a record good as it’s ultimately down to the band and their songs, but the wrong producer can certainly destroy something, if that make sense. And Tim Armstrong is clearly a good fit to G2. One criticism I have heard levelled at the record by one LTW colleague of mine was that the omnipresent “woah woah” backing vocals were just a bit too much. Sometimes less is more.

The title track – released as a pre-album single – mixes a high octane verse that is pure punk with a chorus that is so highly melodic it is pop-mod in the vein of Ordinary Boys and even King Prawn.  Perhaps it’s a move to get radio airplay and more sales but it may put off some of Grade 2’s core audience if they don’t hear the rest. The big question for me is whether the graveyard island is the Isle of Wight or the entirety of this septic isle?

Look Up, Murder Town and JSA in particular have Tim Armstrong’s fingerprints all over them. Look up could so easily be a Rancid song with the keyboard, brass, woah woah, and exclamation of “yeah”. Phrases like “This goes out to…” sounds like uncle Tim at work! The sixties/northern soul back beat gives this tune a great sense of urgency. Murder Town could equally be Rancid, some of the chorus vocals even taking on Armstrong’s timbre. I still have that old fashioned notion that bands write best about what they know and I’m left puzzled about whether it is Ryde, Newport or Cowes which is the Murder Town they’re referring to. On reflection could be a case of the boys from the island being freaked out by the places they have visited on their touring schedule – or even the 2 weeks they spent recording in L.A. The same vibe bumpkin punks Cult Maniax displayed with “Dont Like The City and I wanna go home” or Subhumans with “No, no, no, no it’s too shitty, dont wanna live in the big, big city”. I chuckled to myself as I considered that the true meaning of JSA may be as lost on our US compatriots as half of Cock Sparrer’s “Working” was. One day someone will write a piece of research about how many times our benefits system has been the subject of songs by the downtrodden punks, skins and rastas of this country!

Don’t Look Back does sound familiar to anyone who has existed in Small Town England rather than the Big City. I get the feeling this is aimed at the gobshite in the pub.  Perhaps given that us locals joke that the Isle of Wight ferry takes you 4 miles across the Solent and 5 decades back in time, this could be frustration at the island mentality. Equally it could be borne of the general state of Brexit land, where some hark back to the Empire and the days when sexism and racism were not just casual but mainstream. Don’t look back could also be said of the UK punk scene which of recent years has been inundated with flea bitten retro acts sucking up the oxygen that younger bands like Grade 2 deserve, becoming the end of pier joke that Teddy Boy revival weekends were in the 70s and 80s. The punks laughed back then at these ridiculous old farts in their funny clothes…

Johnny Aggro jumps out at as a song that could have been written in 1976. Upbeat stripped back punk’n’roll with a bit of yobbo thrown it. What Stewart Home might call Dumb Rock. FFO Johnny Moped, Vibrators, Slaughter and Hot Rods.

Bowling Green Lane is a rabble rousing, chunky street punk song which is G2 playing to their strengths. It’s all razor guitar and singalong choruses with the obligatory “Oi” half way through. Dover Street carries on in a similar vein and is pure Cock Sparrer love, especially the cheeky guitar hook. What makes these songs worthy of mention, though, is that they are written about locations on the Isle of Wight rather than the East End or Bermondsey.

Overall, Grade 2 present a nuanced and cynical view of where they come from. This may be lost on some of their listeners, who will get carried away by the tempo and style. As vocalist/bass player Sid Ryan says “The political climate today means that people see the worst in everything, which means that for us there’s a lot to write about. Everything in the country is pretty much turning to shit! There are certain parts of our record that would make sense were it released in 1976.”. What is for certain is that these island dwellers have stepped into the big league with this album, so they’ve probably moved on from the back rooms of pubs. It’s all going to be gigs with backstage passes now on thanks to those Americans in dark glasses. 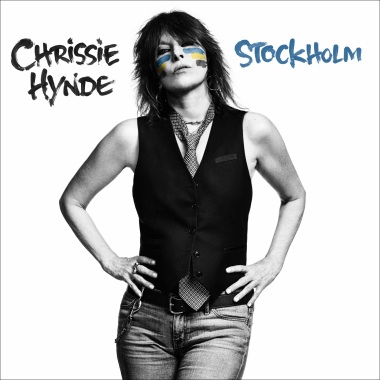 Chrissie Hynde called out for praising Limbaugh…or does she?

January 4, 2019
We use cookies to ensure that we give you the best experience on our website. If you continue to use this site we will assume that you are happy with it.Ok