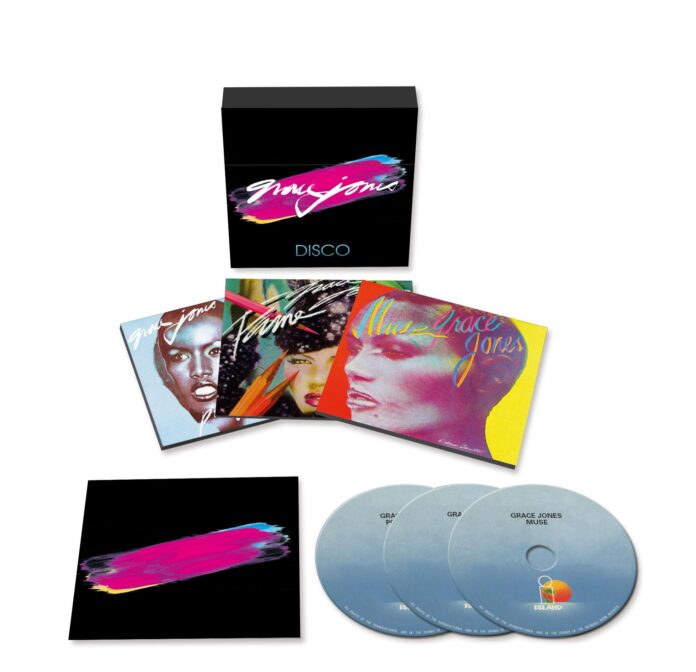 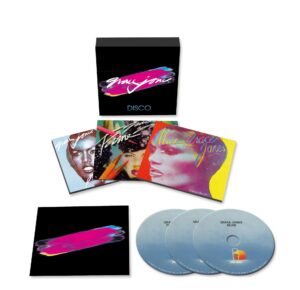 Grace Jones came bursting from the covers of fashion magazines and onto the stage in 1977, quickly becoming a vital force on the New York disco scene. Newly remastered and with a slew of extras, Simon Tucker looks back at Jones’ first three albums, Portfolio, Fame, and Muse.

Is it finally ok to admit to a love of disco? Have the sneers and dismissive remarks by many of the rock fraternity been shown up to be daft and in some cases just plain nasty? Well I truly hope so as then I can proudly announce that I am a big fan of disco. A vital scene that birthed techno, acid house, and club culture as we knew and loved, disco was the start of it all and it’s fair to say that Grace Jones was a pivotal figure in that scene. Starting out as a model, Jones quickly established herself as an artistic force and key player in a musical movement that blew up globally the same year as her debut, Portfolio was released thanks to a certain strutting Tony Manero (nobody by day, hero by night) and his gangs fever for a Saturday night.

Now many fans of Grace Jones will reference 1980’s Warm Leatherette or ’81’s remarkable Nightclubbing as albums you should check out with not many recognising the three albums that preceded them. Are they right to be dismissive? In a way, unfortunately, yes they are as whilst there are some moments on these releases that have certainly stood the test of time, most of it is just meandering disco by numbers.

Debut album Portfolio is the biggest culprit here as you get a real impression that even though Jones has a brilliant and unique voice, those around her really didn’t know how to present or utilise her skills. What we are given are, quite frankly, awful show tunes, Send In The Clowns, What I Did For Love, and Tomorrow *shudders* and the rest is made up of songs that go on for waaaaay to long (it must have been “snowing” quite heavily in the studio when they were making the backing tracks though I suppose that’s to be expected since it was recorded in the same studio that Bowie made Young Americans) and even though tracks from the period did break the recognised and accepted running times due to the club culture that they were birthed from, nothing on Portfolio grips or grooves like great disco should. The only song on here that piques the imagination and gives a glimpse of the greatness that was to come is Jones’ cover of La Vie En Rose which is more subdued than anything else on here and contains some sunlight calypso.

Second album, Fame fairs slightly better as amongst the tedium emerges two great and timeless numbers in Autumn Leaves and Am I Ever Gonna Fall In Love In New York City. Am I Ever..is disco at its finest, with upbeat and infectious rhythms betraying a sadness and wanting lyric. Autumn Leaves, however, is the real start of the show as it gently struts into view, playing out like a Woody Allen movie and showcases Jones’ voice to devastating effect.

Finally we get to Muse and it is here where we start to get an even better sense of producers, musicians, managment, and Jones herself all starting to click and find a cohesive sound. Songs like Atlantic City Gambler, Sinning, and On Your Knees all play out like short films, dramatic and intoxicating. A sign of what was to come.

With these reissues you get long and instrumental versions but these all feel superfluous and unnecessary which only the die-hard disco/Jones fan will be interested in.

Grace Jones’ does her best throughout these albums and her vocal powers are obvious from the off but musically these albums are really not worth bothering with much like the Dame’s early output before he hit a rich run of form with The Man Who Sold The World / Hunky Dory etc.

The warm up act before the main event…

Island Records can be found online here: islandrecords.co.uk as well as on Facebook and Twitter, as @IslandRecords.

Grace Jones can be found on Facebook and she tweets as @Miss_GraceJones.