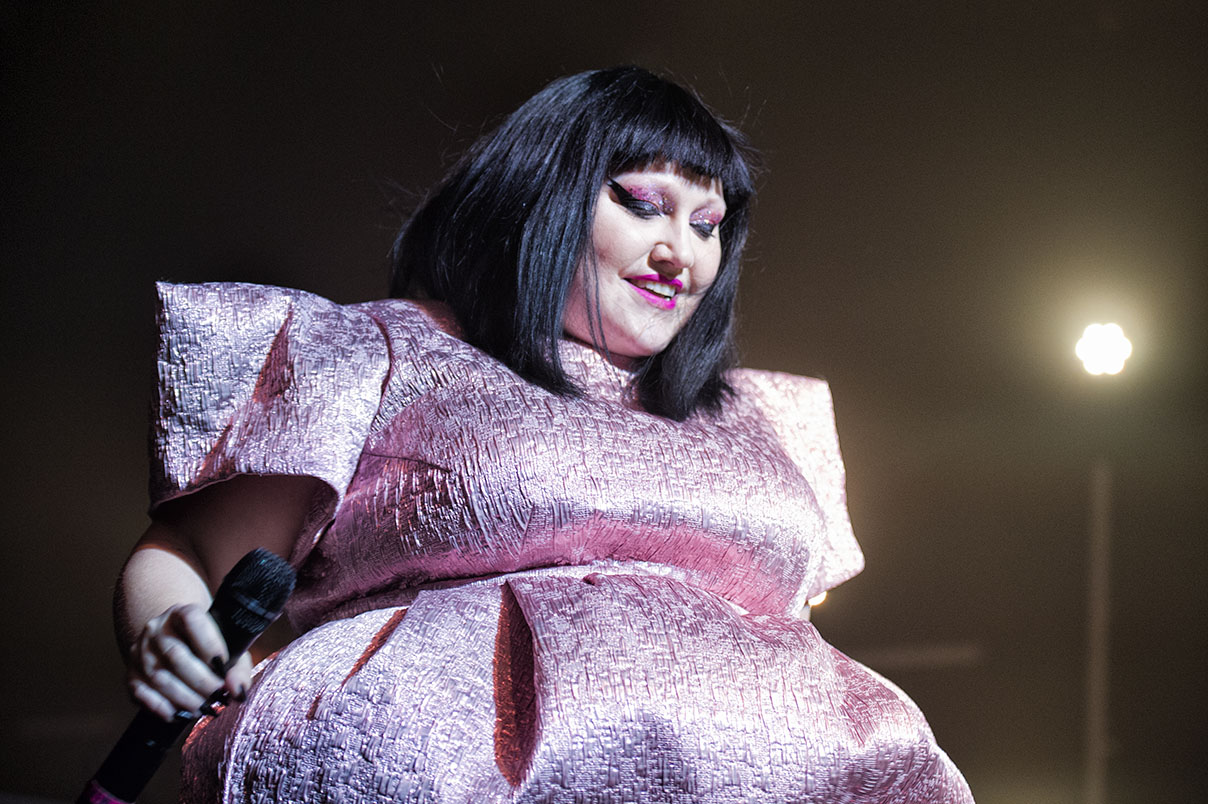 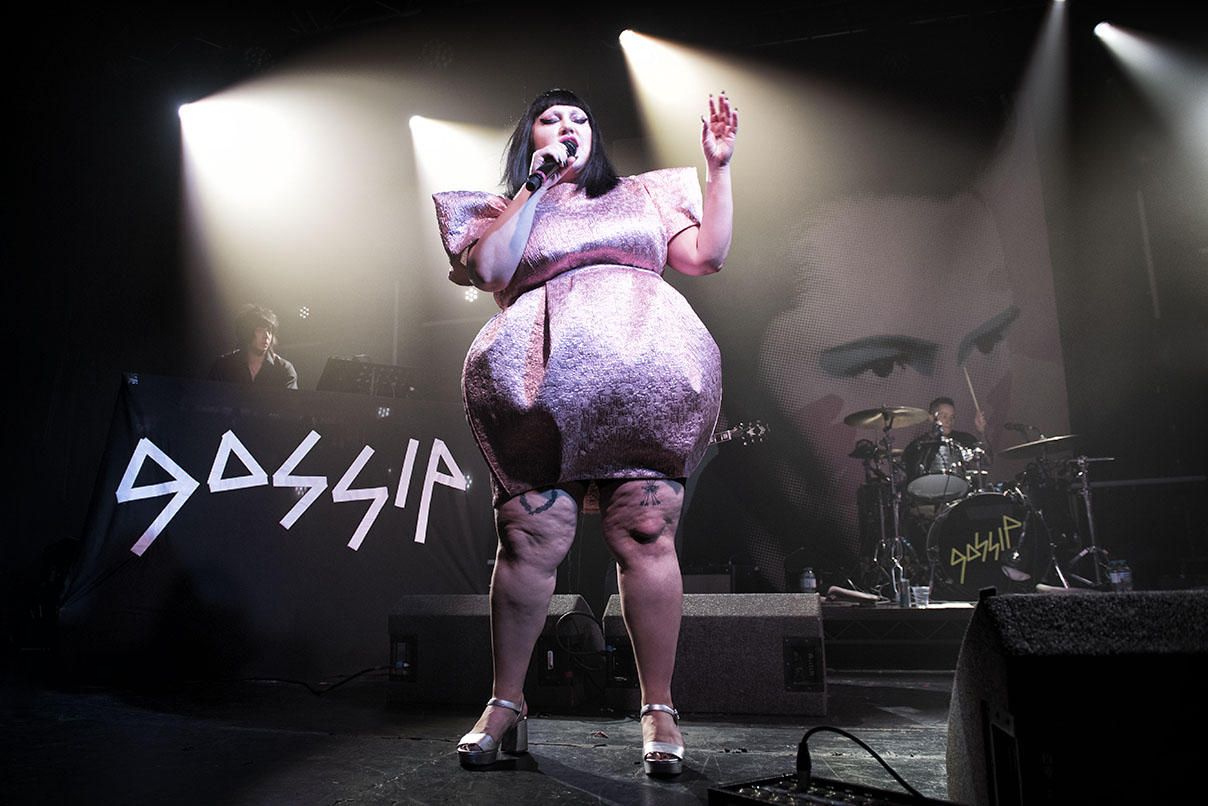 Cazz Blase and Melanie Smith are wowed by a resurgent Gossip at Manchester Academy.

Support act Meggie Brown and her band have proved themselves to be playful foils to Gossip’s slick disco punk revival on this tour. They are ebullient and bouncy throughout their set tonight and it’s clear that they’ve gained fans amongst the audience, who are charmed by the bands enthusiasm and exuberance. Their music takes in a variety of styles, signposting everything from punk thrash to ska to Housemartins esque pop soul and the resulting sound feels new and refreshing while also feeling as though it comes from another era entirely. The variety of musical stylings on display feels like a nod to the mid 1980s period of musical experimentation, whereas Meggie herself bounds across the stage like Damon Albarn circa Modern Life Is Rubbish. 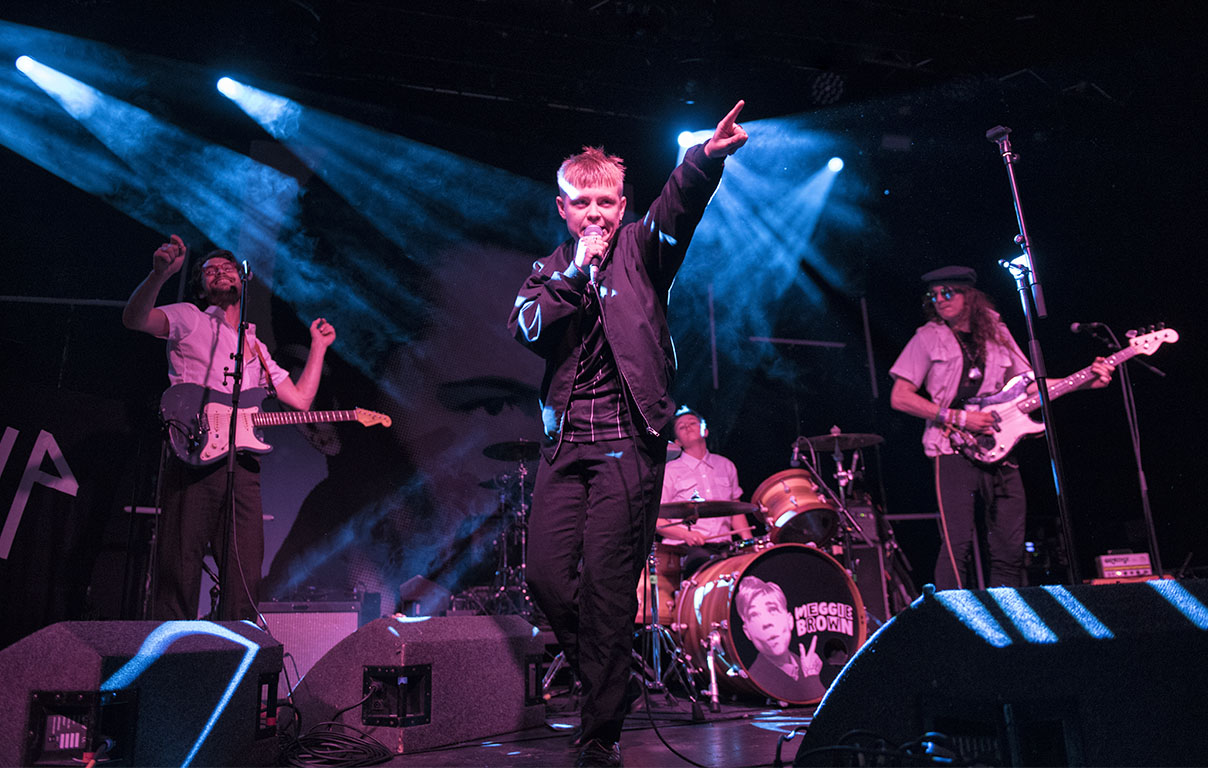 Whatever Meggie Brown’s pop manifesto is, the entire band are clearly having a great time and giving it their all. Once the tour is over, it’s very much a case of going back to London and back to their day jobs, so they are enjoying the opportunity while it lasts.

The venue has filled up considerably by the time headliners Gossip walk onto the stage a little after 9pm. The crowd are more than ready for them and they greet the band with a roar of approval. Beth Ditto, resplendent in a pink frock, hair neatly bobbed, is in her element. She chats with the audience throughout the bands set and, recognising the commitment to the tour of many in the audience, gives a lot of shout outs to those regulars she spots in the crowd, especially her “Stoke-On-Trent family”. 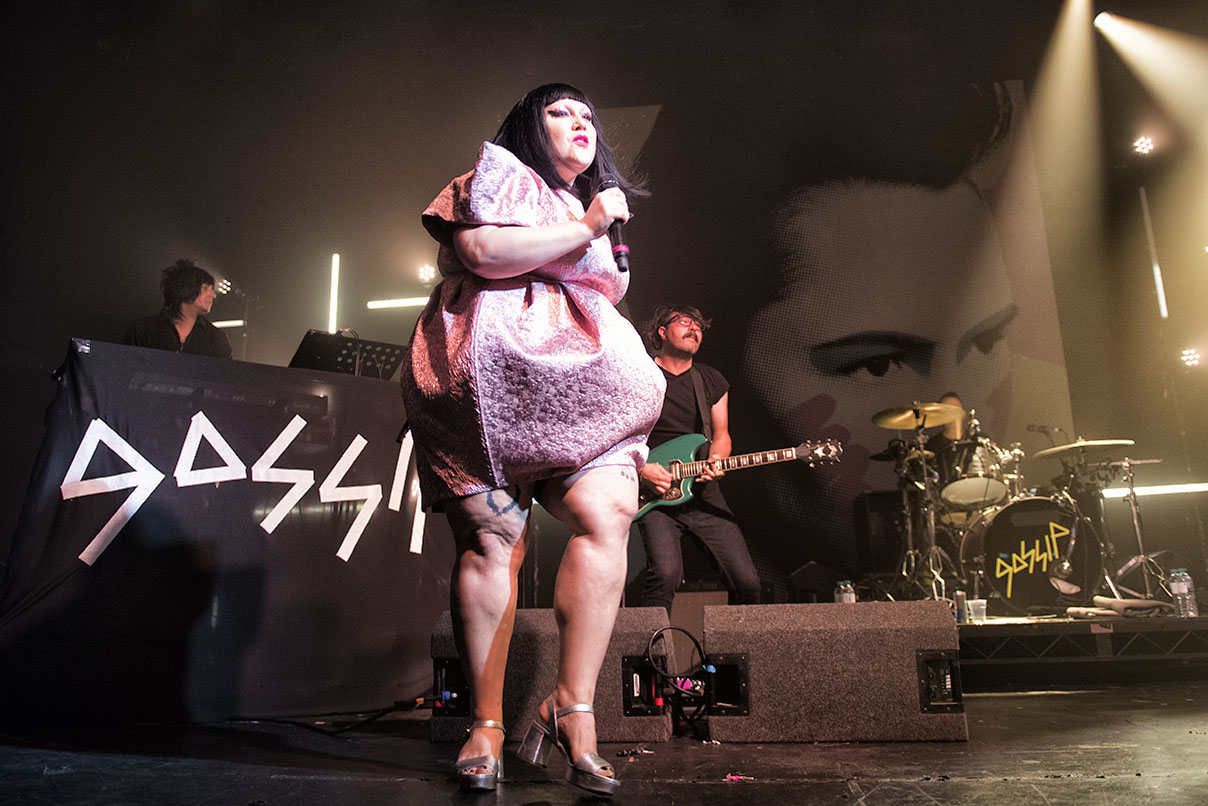 On this tour, the band are celebrating the ten year anniversary of their Music For Men album, the second released in their disco-punk period. As such, much of the set is given over to songs from the album, with ‘Heavy Cross’, ‘Dimestore Diamond’ and ‘Love Long Distance’ going over particularly well. Songs from the acclaimed Standing In The Way of Control album also feature strongly, including the captivatingly intense ‘Listen Up’. There’s also a touching-but-brief acapella sing along to ‘Coal to Diamonds’ at one point.

Ditto, and her astonishingly powerful punk rock Etta James voice, remain the star of the show but she is backed by the stirling talents of her regular recording band, Hannah Billie and Nathan Howdeshell, plus touring musicians Christopher Sutton and Greg Foreman. They have all worked together for years and, as such, there’s an easy camaraderie on stage, a relaxed series of exchanges that demonstrate that the band have nothing to prove. 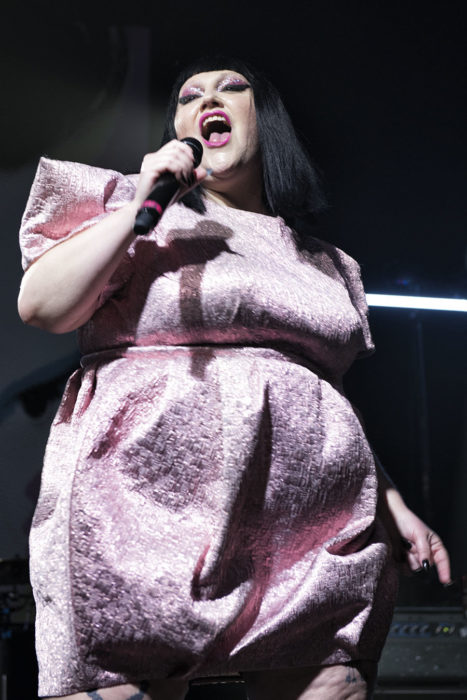 The band’s reformation, three years after Ditto confirmed their split and two years after she released her solo album, Fake Sugar, is interesting in the context of Bikini Kill’s triumphant return to the live arena earlier this year. Making Gossip’s debt to riot grrrl explicit, Beth namechecks Bikini Kill’s Tobi Vail, who recently turned 50, and also mentions that the band were in Glasgow on Friday night and that she met Jane McKeown of Glasgow grrrl band Lungleg. “No one knows who I am” stated McKeown, “I, know who you are” said Beth. It’s a nice moment, one in which a woman who has benefitted from the first wave of riot grrrl both honours those who have gone before while acknowledging her own place in a lineage that continues with bands such as Dream Nails and Skinny Girl Diet.

The energy of the set is constant throughout and, when Gossip leave the stage, they leave us wanting so much more.

The band keep us waiting after they leave the stage, to the extent that self doubt starts to creep in after a bit and you find yourself thinking ‘Surely they’re not going to skip the encore?’ The crowd have worked themselves up into a feverish state and are practically begging them to return by the time they begin to re-emerge, one by one, onto the stage. The haunting melody of George Michael’s ‘Careless Whisper’ wafts through the room, Beth returns in a new dress, green this time, and they begin their uniquely punk take on the song, shifting it up a gear but keeping it sincere to the original meaning. 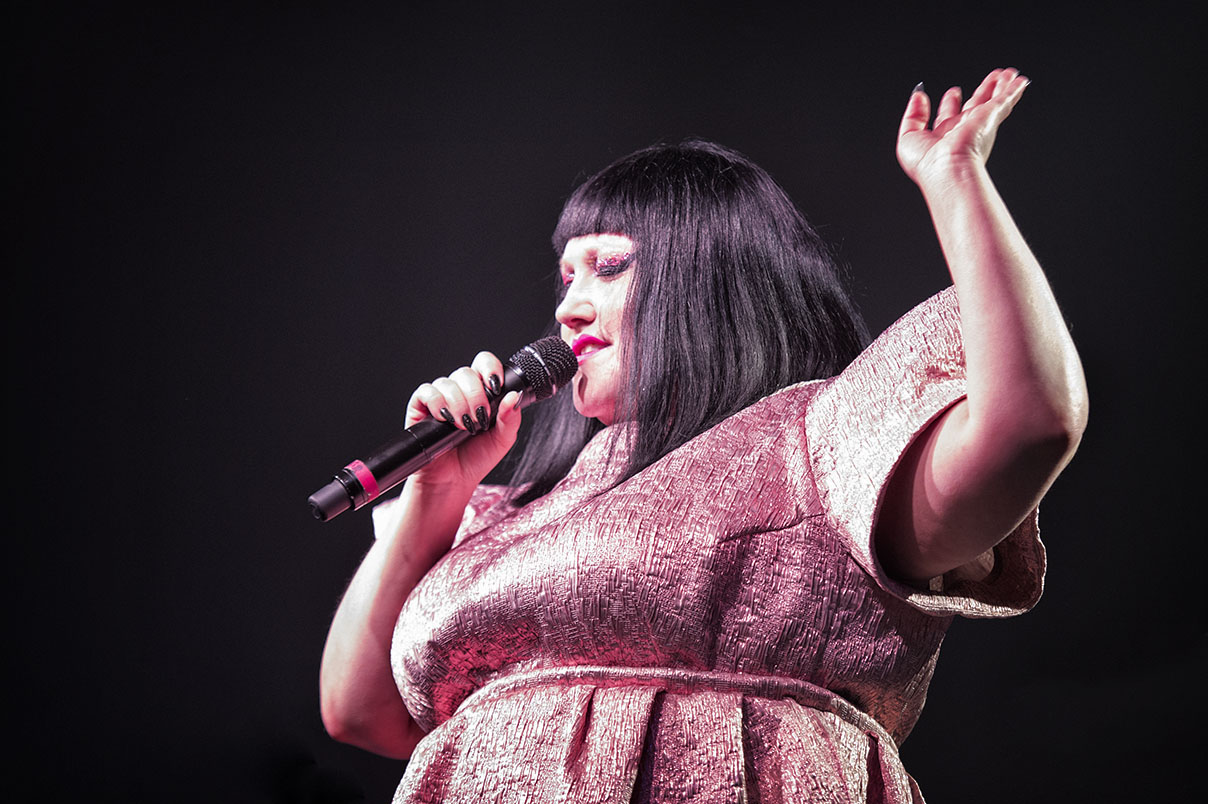 The yearning of ‘Careless Whisper’ is followed by an electrifying ‘Yr Mangled Heart’, then – of course – they finish the night with ‘Standing In The Way of Control’ and the crowd explodes with happiness into a sea of dancing, jumping, pogoing, singing bodies.

In the excitement of it all two women scale the barrier into the VIP/Disabled Access section of the crowd. As the security guard is escorting the second woman away, woman number one evades him and gets up on stage with Beth. In the end, both women end up on stage, complete with microphones, and Beth lets them take over the vocal, the steadily singing crowd serving as ballast to their voices.

‘Standing In The Way of Control’ was originally written in the George W. Bush era as a protest against his administration’s refusal to allow gay marriage in the US. In the Trump era, the song has found a new resonance and political charge. Some of those jumping up and down to it tonight, bellowing the lyrics at full pelt, may well have originally danced to the song at a queer disco in 2006, while others may well have encountered the remix of the track via radio. Many of those present tonight will have no idea as to the politics behind the song. Nevertheless, the crowd have found it, they are owning it, it is theirs.