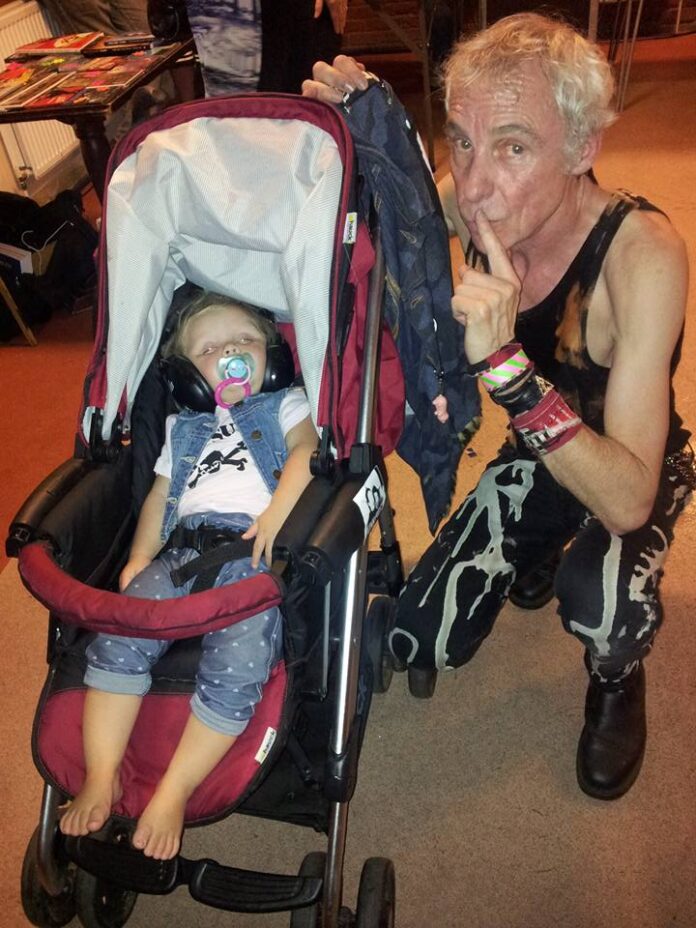 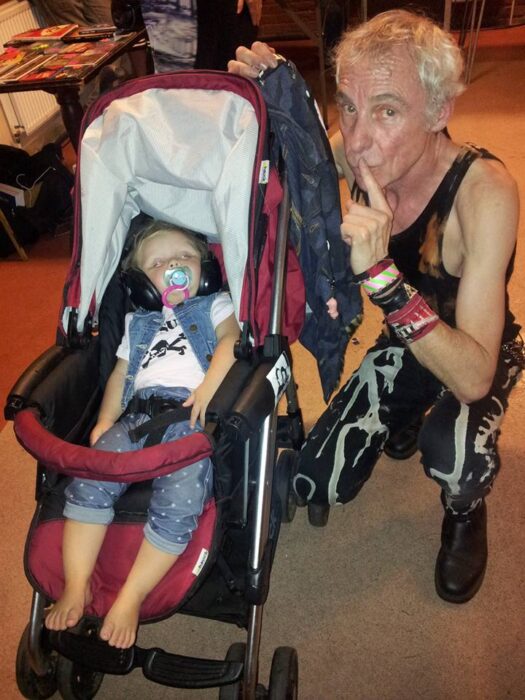 Another of the “black t-shirt , shit band” multi-band two-dayers which seem to be springing up all over the UK, proving Punk’s STILL Not Dead. Fun for all the family says Ged Babey.

Two days of Noise. Two days of beer. Two days of meeting some brilliant, hilarious, lovely people. Gosports annual punk rock festival brings every nutter from a thirty mile radius out of the woodwork.  Sorry, ‘character’, not nutter. Then again…

There is such a strong bond of friendship and camaraderie in Gosport’s (and nearby Portsmouth’s) punk scene that it always makes for an excellent night, irrespective of who’s actually playing.  They love their punk rock and they love to party down Pompey way.  One bloke traveled from New Zealand to attend. There were loads of teenagers there to see their mates play bottom of the bill, rubbing shoulders with punk grandads and all ages between.

Two year old Rudi Calver melted the hearts of the tuffest punx.   The inimitable Ratboy wandered around on day 2 dressed as a gangster complete with plastic machine-gun  and the soon to be legendary Five Go Mad made their live debut, following mass distribution of their badges and t-shirts (good to see they’ve got their priorities right. The band features Brian from hardcore anarcho legends Ad Nauseum whose reputation spread beyond the county boundaries and whose T-shirts they have adapted.)

Even off-duty punk rock legends like Gary Lammin (Cocksparrer and Bermondsey Joyriders) made the trip down despite not even playing (this year).

The bill had been hand-picked by Night of Treason frontman Pinky as a 50th birthday present to himself and was stunning for a low budget DIY festival.  TV Smith and X-SLF headlined and were both rapturously recieved.

Timothy Victor Smith shows no sign of slowing down, quite the opposite, playing like a man possessed.  Henry Cluney looks a lot slimmer and healthier then he did a couple of years back and X-SLF play with a relaxed garagey atitude which makes the old songs sound even fresher.

Dragster and Pussycat & the Dirty Johnsons flew the flag for female-fronted rock ‘n’ roll being wilder and more stylish than their male counterparts.  Dragster are pure kick-ass whereas Pussycat are total entertainment and great tunes. 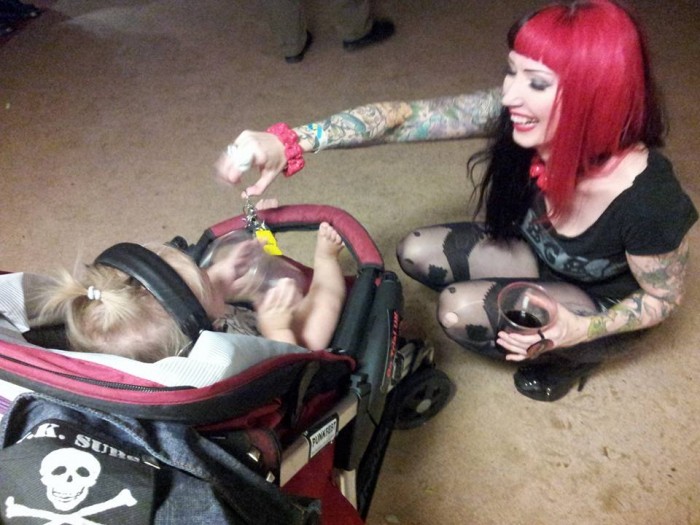 I enjoyed Morgellons brand of post-punk-ish punk rock a lot more this time round as they provide something a touch more refined yet still grounded in solid guitar-playing and no-nonsense attitude. The acoustic guitar-toting young warriors went down well with the younger element of the crowd, Sim Williams being the most distinctive.

Pain Razor – a young local bunch of metal-head punk-kids entertained with some bizare covers – Jilted John followed by Breaking the Law before their own future-classics like masterclass in sledgehammer subtlety ‘the government are cunts’.

Luckily the debut of Five Go Mad was caught on camera – the highlight of which was Archive 45’s Mike Malignant trying his best to put the band off by playing the hyperactive sex-pest (the video won’t upload sadly).

I missed a great local band called the Smokin’ Prophets who impressed all the old Thunders fans present.

One band I’d never seen before who absolutely blew me away and were the surprise hit of the weekend were A.M.I ( Anti-Meathead-Inc). They’ve been around for a while now and have a great album out on T&M.  There main claim to fame up until now is that their singer Marley is Charlie Harper’s grandson.

Grandpa often appears with them to help out on encores apparently but he seems to have taken a step back and I can see why.  They don’t need his help any more to get attention. The stabilizers are off.  They haven’t reached 18 yet but they are a full-fledged band now – and a damn good one.  Proper snotty-nosed, pissed-off punk rock’n’roll.  They look like Eater (the drummer is 13) but sound like the Circle Jerks with a bit of Rage Against the Machine and (inadvertantly) the Faith Healers thrown in for good measure.  They are effortlessly dynamic, wonderfully sarcastic and a contradictory mix of confidence and shyness.  The songs seem to be a serious and stupid mix of insults and reasons to be angry.  They are the most exciting new punk band I’ve seen for quite some time. As Jon Savage said dismissively about Eater – ‘youth, on its own is not enough’ but combined with skill, great guitar sounds, cool songs and spot-on attitude, it is. “See our mummies if you want to buy our CD”.

Instead of a minutes silence for the recently departed (including Pinkys dad who looked like a real old character, the type you only get in Naval towns), there was a minutes Noise -as a sign of respect, which raised the roof.

Thanks to the generosity of Pinky, the bands and audience, a total of £196.30 was collected for the Jess Hensford Appeal simply because they took my word for it that her dad Sean is a black t-shirt shit-band wearing punk in need and we should look-after-each-other.  It’s corny, I know, but punk rock is family – and even as we grow older us Kids are still united.

Happy 50th birthday to Pinky by the way – what a great way to end your 49th year. A brilliant weekend – which deserves a far more coherent review, one not clouded by so much alcohol…