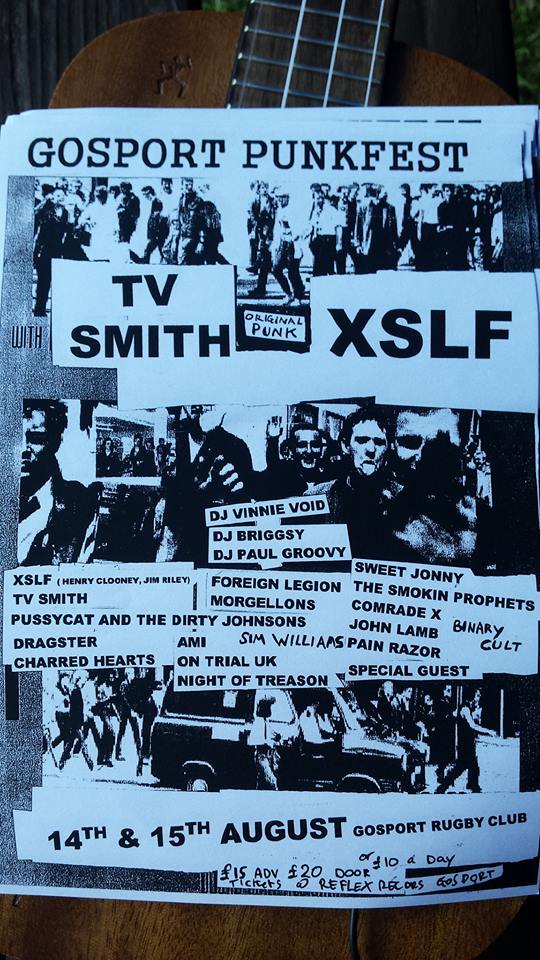 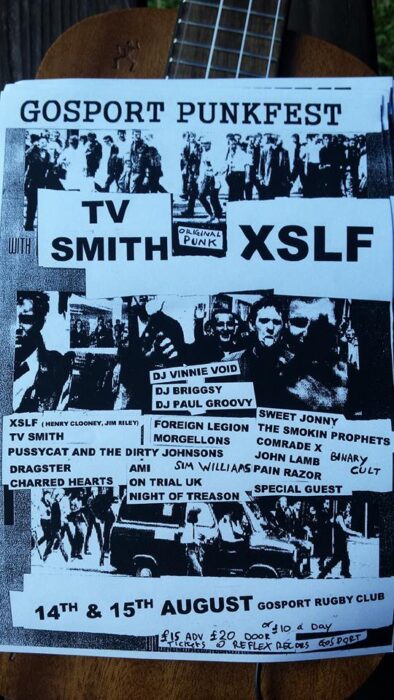 Blackpools Rebellion is of course the Granddaddy of Punk Festivals  but Gosport is a cheap and cheerful. fast and loud, punk and proud  alternative option for those down South.

Now in its 10th year  its run by the indomitable Pinky from Night of Treason – who celebrates his 50th birthday on the Saturday – this years selection of acts include a couple of legendary punk figureheads topping the bill.

TV Smith (whippet-like former Advert in his bleach-splattered trousers armed with acoustic and fire in his belly)  and X-SLF  (a band who include two key members from Stiff Little Fingers classic line-up, Henry Cluney and Jim Reilly. Henry being Punks answer to Frank ‘Its a cracker ‘ Carson.)

Two of the best Trash Punk Rock’n’Roll bands in the UK, irrespective of the fact they are both fronted by striking females, Dragster and Pussycat and the Dirty Johnsons are second on the bill.

Archive 45 a fantastic bunch of lunatic rock’n’roll veterans from nearby Portsmouth.

A M I  feature Charlie Harpers grandson Marley on vocals and sound like a lot of punk rock fun.

Unlike most other horrible outdoor Festivals, Gosport PunkFest has no trade stalls.  no over-priced food, acoustic tent, crusty jugglers, art or comedy distractions –  its basically just Punk Rock and Beer.  Its not even really a Festival its just two multi-band gigs two days in a row – its just easier to call it a Festie.  Pinky has made vague promises about some hot-dogs possibly being available …. Vegetarians can fuck off to the nearest chip-shop.

Between bands there are three great DJ’s – Vinnie Void, Paul Groovy and Briggsy.

The Full Line Up is;

Any profits from the festival go to local charities and Pinky has agreed to let me wander round rattling my collection bucket to  raise money for Jess Hensford, daughter of a local punk rock geezer.  Huge thanks to attendees of Gabefest and the Outcasts at Talking Heads and the Old Age Punktioners @ the Joiners who have donated as well as many anonymous others.  Keep ’em coming.