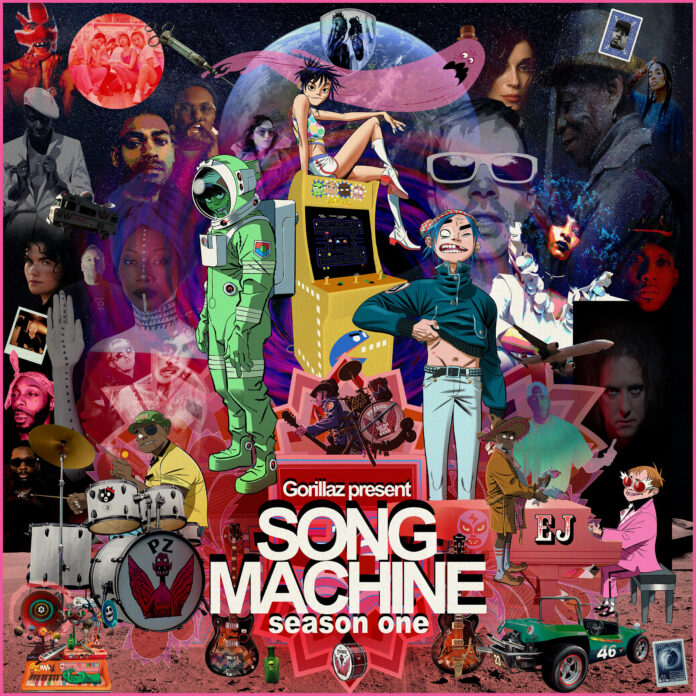 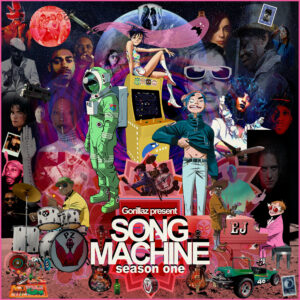 The greatest virtual band on Earth are back with a new venture and a head spinning amount of guests, an expanded edition and a one of a kind Almanac, the very first annual from Gorillaz. It’s an effort to return to the form of the brilliant Demon Days and Plastic Beach says Wayne AF Carey as he reviews the extended version…

The canny duo of Damon Albarn and Jamie Hewlett return to their virtual best and can still pull the big guns from up their cartoon sleeves, as you will witness on this sprawling guest filled dystopian journey of technicolor tunes that still grab from every genre, which Albarn does best, masquerading as the infamous 2D. Starting earlier this year with Episode 1 – Momentary Bliss ft. Slowthai and Slaves and ending with the familiar vocals of Robert Smith in Episode 6 the cartoon quartet of Noodle, 2D, Murdoch and Russel present to you the full collection in all it’s flawed glory. They’ve travelled to Morocco, Paris, London, Lake Como and even ventured onto the moon for a lark around. So what have they brought back with them?

What a way to introduce this with the excellent as ever Robert Smith laying vocals on opener Strange Timez a hypnotic melee of sound effects backed by a funky bass driven drumbeat with the prophetic 2D dishing out the spoken word. Beck continues the pop funk on Valley Of The Pagans which bangs straight in with 2D announcing he’s found a warehouse full of Viagra pills?? No wonder he’s funked up! “You can feel like a Pagan in the valley” Loving that line! The Lost Chord is a mellow affair that floats in with a mellow bass line and chilled vocals back by Leee John’s smooth soul undertones. Pac-Man goes all G-Funk with Schoolboy Q from South Central LA adding to 2D’s haunting mantras with his flowing rap skills. St Vincent makes an appearance on the electro tinged Chalk Tablet Towers. More filler than thriller this one. Then the heavyweight appears in the form of Elton John. A proper chilled out tune with the piano laden vibes and the vocoder riddled vocals of 6LACK tussling with Elton throughout as he masquerades as The Pink Phantom. “The Phantom is coming, he’s crossing over the line”. Smooth as fuck.

Aries comes in all funked up and you just know Hooky’s in there with that familiar low slung bass sound accompanied by the onslaught of old style drum machines, a trip back into 80’s territory here from the school of OMD, Depeche Mode and of course New Order. Octavian introduces Friday 13th with his smooth flow against a backdrop of downtempo trip hop that chills the fuck out in blissed out vibes. Dead Butterflies goes all mellow dubstep on us with Kano and Roxani Arias swapping vocals. Kano flows like he always does on this laid back piece of bouncing texture. A nice touch from Albarn here. Desole grabs from the barrel of world music and bounces along with the beautiful vocals from Fatoumata Diawara and 2D complimenting each other. It’s a bizarre track that wanders off from the rest of what you’ve heard up to now, yet manages to piece the whole listening experience together. Momentary Bliss should be familiar to Gorillaz fans by now with the sound of Slowthai and Slaves mixing it up with a ska tinged tune that goes up and up and threatens to smash up then comes right back down. Bit of a disappointment really.

Opium is a down tempo house groover featuring hip hop duo Earthgang. A proper Ibiza sound happening here that gets your feet moving and your head nodding. A hark back to the Latino Hacienda tunes from the like of T-Coy. Joan As Police Woman enters the room with Simplicity and you sense that Albarn is struggling a bit in between tunes here. It doesn’t really go anywhere and strings the whole affair out a bit. Severed Head features the laid back rapping of Goldlink and the sounds of Unknown Mortal Orchestra adding to the ethereal notes going down here. A nice ambient hit from Albarns mind. I absolutely love next track With Love To An Ex. It’s a pure trip hop experience that reminds me of Karmacoma (Massive Attack) and early Tricky stuff. Moonchild Sanelly sounds like she’s been mentored by MIA. Proper chilled and chilly dark stuff. MLS goes more upbeat again with some nice flowing rap from JPEGMAFIA and CHAI, typical Gorillaz stuff going on. Albarn’s been getting into his hip hop judging by this and it matches the cartoon image of Hewlett’s creations. To end an album that doesn’t always shine but holds up, we get an excellent outing by grime master Skepta with the even more excellent masterclass of drums from the late Tony Allen. It actually rescues a bit of a mediocre lull in the album.

Don’t get me wrong. It’s actually overall a good listen. Some crackers on here that hold up, yet sometimes you think Albarn tries too hard which is a shame. He’s always been one for breaking the rules with his ideas and for that I respect him. But sometimes a bit of a kick up the arse needs to go his way before he gets too complacent. Other writers think if Albarn fuckin’ farts though a kazoo it’s genius. A bit like Jack White falling down a flight of stairs in the middle of a guitar solo and being hailed as Jimi Hendrix. Thank you, goodnight…