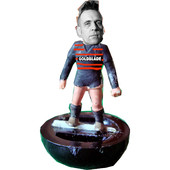 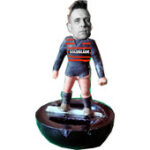 All the Three Lions breast beating and harking back to Terry Butcher’s blood stained headband and Stuart Pearce’s eye bulging pyscho look has to be over now. Somehow it still lingers though. When the players take to the pitch they are stiff and tense- like some kind of totally wired army ready to go over the trenches. The tabloid talk and vague air of empire and the war is still hanging round the national team like a nostalgic cloud. It must be about the only place left in British culture where the Great Escape still has a big meaning. Also 1966 has become a curse that hangs around the England necks for ever- apart from that one wonderful competition and a semi final or two  we have always been below expectations at world cup finals. Forget history, it’s time to move forwards…

2. Time for clubs to invest in community

Multi zilllionaire footballers are not earning their money and the multi zillion pound clubs are not even part of their community any more. It’s time to adopt a German model or go beyond that. The multi national club corporations need to re-engage with the locals. They need to be at the vanguard of finding and developing new players. Someone needs to look at this new Belgian model that has made them leap up the world rankings- not to copy it but maybe the very idea of having a new idea! Someone needs to get hold of the youthful football talent before it descends into the fat man of Europe role that the next generation is sliding towards- crap food and crap lifestyles are stifling another load of potential recruits . A nation of 50 million must be able to find another 20 good payers – after all Uruguay seemed to have managed it with 3.5 million people.

3. The Premiership session is not too long as Suarez effortlessly proved

The moaning about the length of the Premiership season has some truth in it and it can’t help that in the UK the clubs are far more important than the national side but the one thing that everyone overlooks is the foreign players who compete in the Premiership and who then go on to the world cup and are playing out of their skins. Whilst Wayne Rooney huffed and puffed around the pitch a crocked Suaraz scored two goals and could have had more and looked effortless and joyfull- something you could never accuse the England players of!

4. Give youth a chance : the Old guard are just not good enough

Much as we love their on going soap opera- it’s time for Gerard and Rooney to hang up their international boots. It’s time to throw caution to the wind give the youth chance. There were glimpses of a New England in the two world cup matches- a lighter, faster, nimbler team without the huffing and puffing- young payer prepared to take on opponents and less of the old guard’s 100 plus England caps experience which only seems to hinder them. Oh and it’s a team game as well- we’ve had enough of golden generations and star players- it’s about the team…

The stuffiness at the top of English football has to go- it slows down the flow of idea- lets fast forward to the future- maybe even move to 1967 from 1966 and with a deep breath take a leap into the 21st century.

Every world cup is the same- the ‘nation expects’ drivel followed by the huff and the puff, then the manager’s head in his hands, the pundits looking deflated and then everyone sniggering away as the players get on the plane h0me another generation of broken losers…then the talk of roots and branches revolution and then nothing happens. It’s time to remove the blazer and really make a difference. Time to have clubs run not for self interest from corrupt business types, time to re-engage with the community, time to nurture the new talent- time for change. Real change.