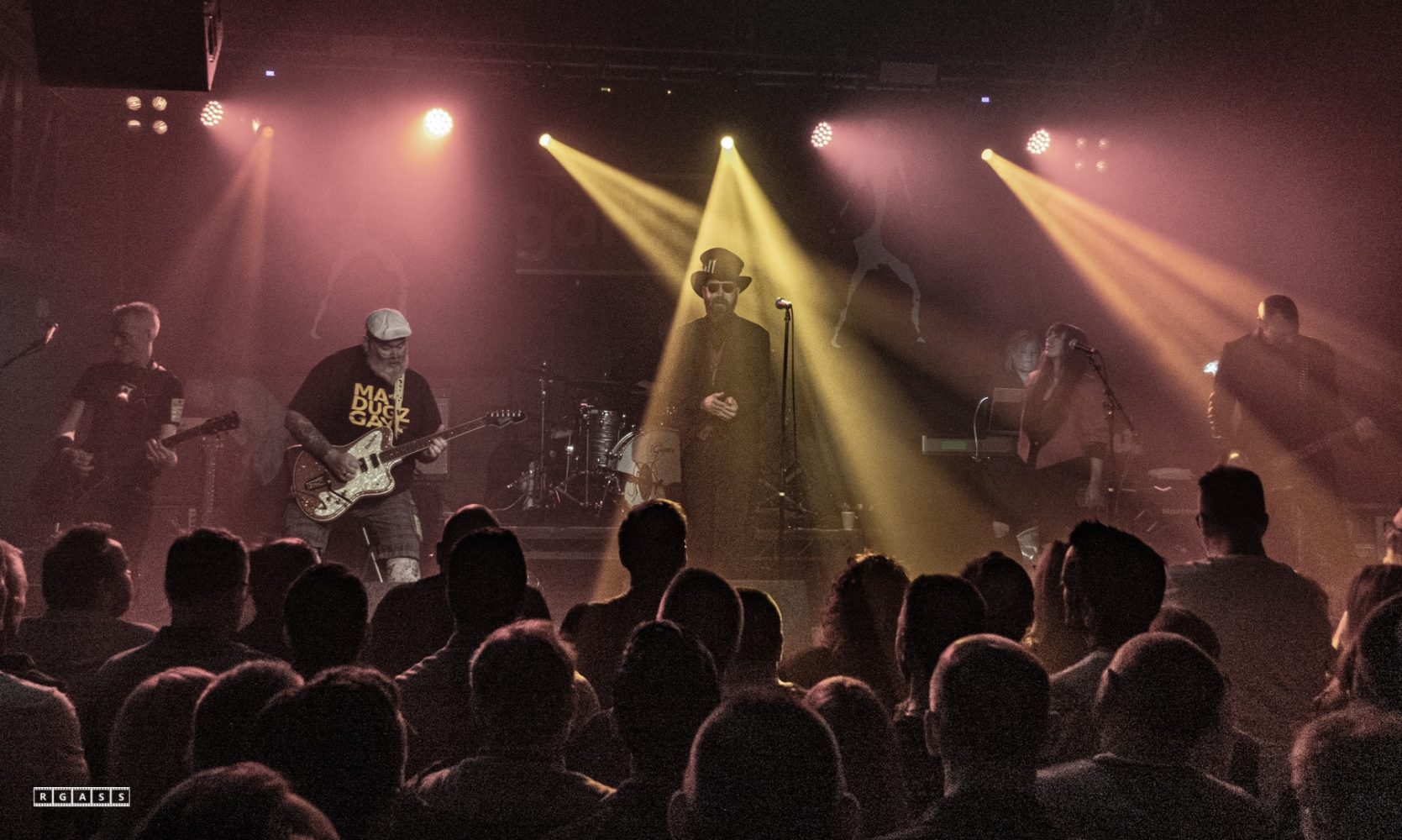 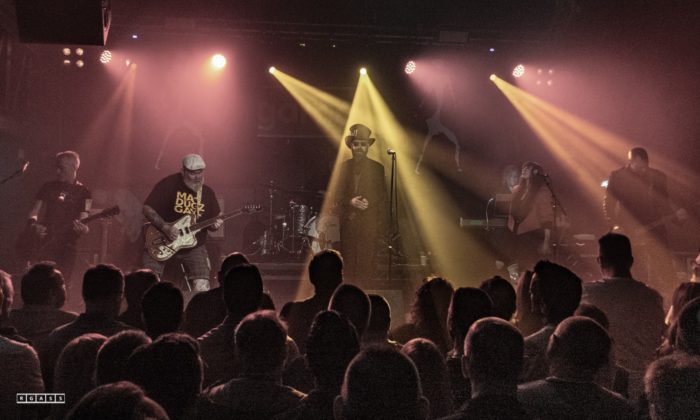 The Garage, Sauchiehall Street, Glasgow, 22nd May 2019. Just gone 8.30pm. I wouldn’t have been anywhere else in the world at that very moment in time. This is a place, date and time – an event – that will live long on the memory. Unforgettable. Neil Hodge makes no concession to objectivity here as he says Goodbye…

This is a date that many have waited for since 1995, since that fateful day Goodbye Mr Mackenzie, well, said goodbye, playing their farewell Glasgow date. Was it worth the wait? I can’t express just how much it was worth the wait. It is difficult to put into words just how epic tonight was. This gig was life-affirming. Like a sort of homecoming, it was the coming together of like-minded individuals, the return of the prodigal sons and daughters, bringing them back into the fold, the return of the all-conquering heroes, taking the North and returning to take their places on the righteous throne.

Disclaimer: whatever I write can never do this gig justice. No-one has created enough superlatives for me to describe just how jaw-droppingly awesome it was.

Approaching the venue, whichever way you turned on Sauchiehall Street and the surrounding bars there was someone wearing a Mac man t-shirt. Following the tremendous feedback from the first two gigs on the tour, in Dundee and Dunfermline, expectations were high and the atmosphere in and around the venue electric.

It was an early start due to the venue curfew, but support act, The Countess of Fife, the band fronted by Fay Fife of Rezillos fame, still drew a substantial crowd. They were deservedly treated to a glorious set of country-punk tunes. Ms Fife was in fine fettle; she has a powerful rich vocal that can stand shoulder to shoulder with 60s legends like Sandie Shaw and Dusty Springfield. A more than welcome start to the evening’s festivities.

Suitably warmed up and lubricated, the crowd started filling out and as stage time loomed large, the venue was as packed as I’ve ever seen it, a Wednesday night too, slap bang in the middle of the working week, that is the draw of the band. Judging by what I’d heard, demand for tickets was phenomenal and I’m sure they could have sold out the venue twice over. Spirits were high, senses were heightened, the anticipation was palpable. You could cut the atmosphere with a knife. Then it all began… 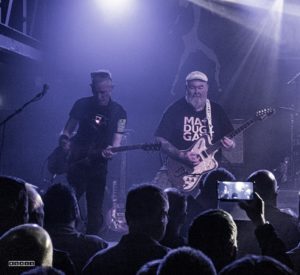 One of the biggest cheers I’ve ever heard resounding around the Garage welcomed the legend that is Big John Duncan to the stage, resplendent in a Chibmarks t-shirt with the narrative “Ma Dugz Gay” emblazoned across the front. The ovation was incredible – and that was only the first band member to appear. Big John’s appearance was a welcome sight, battling with MS it was no mean feat for him to appear at all, but to play the full gig having already done the same in Dundee and Dunfermline was incredible. It would not have been the same without him. Cheers big man.

The rest of the band appeared to an equally rapturous reception. The last time I saw the band in this venue I was overcome with emotion as it was to be the last time I ever saw them, or so I thought. Tonight, my emotions were close to the surface, and as the band took to the stage & the seven members stood there receiving their applause, I believe some dust may have got in my eye…The sheer joy at seeing this band together again was overwhelming. I already didn’t want this night and the feeling of euphoria to end.

Original members from the time of the album release; frontman Martin Metcalfe; guitarist Big John Duncan; drummer Derek Kelly; bass player Fin Wilson and on keyboards Rona Scobie were joined by Marie Claire Lee, taking on backing vocals in place of Shirley Manson, and supplementing Big John’s guitars was Jim Brady, a further Rezillos connection to the evening. Just taking in the view of the band on stage before they played a note brought a huge grin to my face. I never thought I would see that gathering of musicians together in one place again. 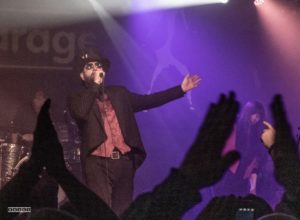 Martin Metcalfe is an imposing sight. Elegant and suave as ever, dressed head to in black, save a burgundy waistcoat, dark glasses and battered oversize top hat, one side encrusted with bones, he is a striking frontman. One of the best, with a commanding deep brogue that matches the image down to a t.

As the band struck up the opening to Open Your Arms, the first track from their classic debut album there was no going back, they were out of the traps and nothing could stop them. The first five songs flashed by. “Side One” (for the old folks amongst you) was played in order, the band seemingly getting better, louder and tighter with each song they played… Wake it Up, His Masters Voice, every song received a rapturous reception, the heaving throng of people delighted to have these songs back once again in their lives in the live arena.

Every single band member played a blinder, executing their roles with their weapons of choice as if their lives depended on it. The sound of the ensemble was massive, a humungous thumping rhythm section thanks to Kelly’s masterclass in drumming and Fin’s dynamic bass, a tight unit of crunching lead and rhythm guitar courtesy of John and Jim, soaring keyboards from the divine Rona Scobie, all came together in a perfect storm of sound and fury in a state of heightened emotion. Special mention to Marie Claire who had big boots to fill. She was exceptional on backing vocals – who needs Shirley Manson anyway! Check out her own band Seil Lien too, you won’t be disappointed.

Perennial fan favourite Goodwill City received a thunderous reception, the band and crowd together ripping down the walls and tearing the ceiling down before the magnificently haunting Candlestick Park closed the performance of “Side One”. I was emotionally exhausted but desperate for more. 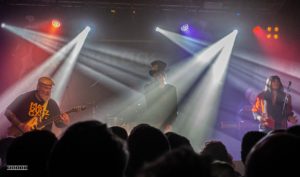 I don’t think I would be wrong to say the band were feeling as much emotion as the crowd, the connection between the two was remarkable, each feeding off the others energy and enthusiasm and whipping each other into a frenzy, building the atmosphere to a peak.

Before tonight, no-one could have anticipated the sheer eruption of ecstasy during the performances of the final two tracks. Goodbye Mr MacKenzie and The Rattler had everyone from front to back singing, smiling, and bouncing as one. How The Rattler wasn’t a number one hit across every country in the world is beyond me. The joy I felt during the song is indescribable, this band have moved me tonight, there is a shift in the equilibrium, Goodbye Mr MacKenzie have an unfair advantage over everyone else, tonight they are untouchable. The world seems a brighter place. Forget all the shite going on in the world. Here and now is all that matters. “I’m going to a better time; I’m going to a better place…”

Can you follow that? Well, apparently you can. Returning to the stage to a rapturous reception, the band went on to play one of their most controversial songs. Face to Face is a vivid lyrical depiction of a horrendous rape and the fall out at trial, where toxic masculinity & power tripping misogynistic men deal out their pathetic excuses. A powerful indictment on the state of the legal system when it comes to victims of this heinous crime. The performance was magnificent and sensitive.

The show wasn’t over…with a closing salvo of the dramatic Blacker Than Black and mercurial Now We Are Married I can safely say, there was a union of souls throughout the venue, we could all see everything through a single eye.

I could say there is no point in ever going to another gig again, I have seen the pinnacle. Can anyone match the sheer raw passion on display tonight? (Erm, Mrs Hodge – strike that last comment, I’ve got loads of gigs coming up…). Anyway, that may be a moot point as they announced from the stage that they had confirmed a date in the iconic, best venue in the world, Glasgow Barrowland on the 20th of December. Merry Christmas – see you down the front…a gig not to be missed.

A staggering thrill-ride, a phenomenally unforgettable evening. Looking around the venue as we were leaving there were stunned faces all around, as if no-one could believe what they had just witnessed. Talking to a few folks immediately after, to a person, they found it almost impossible to put their feelings into words, such was the spectacle they had just witnessed.

Goodbye Mr MacKenzie, one of the most under-rated bands ever, they should have been massive worldwide. Tonight, though, it was enough that they were once again the victorious, all-conquering heroes of Glasgow, they came to this city already loved, they left having ascended to a place in our hearts and minds that very few can achieve. MacKenzies, Glasgow has missed you. Let’s do it all again in December.

Worldwide domination can wait until later…