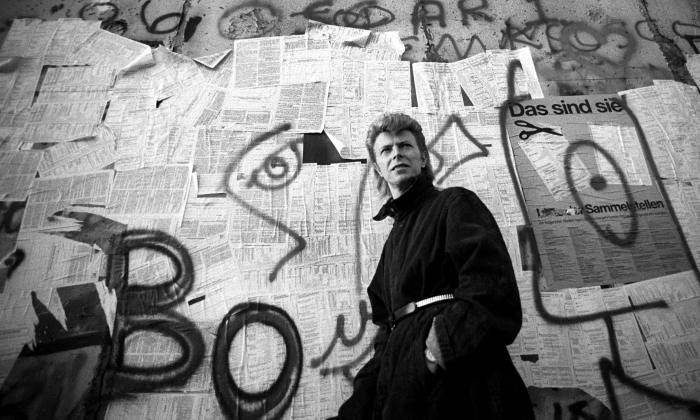 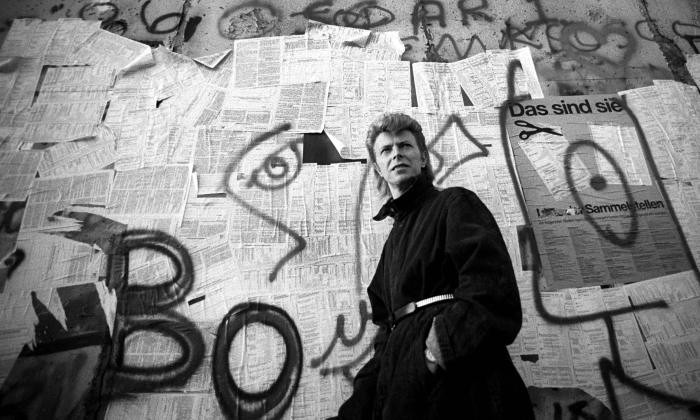 The Potsdamer Platz I’m wandering about to find Hansa Studio is a lot different to the desolate one which David Bowie frequented in the late 1970’s.

Today it is a spectacle of enormous glass buildings, five star hotels, cinema complexes and hordes of tourists navigating the traffic lights and avenues in the biting cold. After harassing friends with smarter phones than I for directions, I eventually turn onto a side street where a small queue is forming. Moving closer I can see bundles of flowers and candles on the ground, some red carpet and velvet rope. There’s a solemn man standing outside with a camera and a crude black star painted all over his face. Two security guards, suited and booted, let a stream of folk exit the main doors before politely ushering the rest of us into the foyer of the infamous Hansa Tonstudio, who have opened their doors to celebrate the life of their most iconic and prolific artists, David Bowie.

Portraits of Bowie line the stair well and the walls of the landing where a long line of fans waits to sign one of two books of condolences. The main room of the proceedings, a giant banquet room of sorts but with a stage, is playing Black Star on repeat to a bustling crowd of fans and studio staff who look like they have no intention of leaving the magnificent room, now a makeshift funeral home to their pop icon. There is an alter of offerings and flowers under a photographed portrait of an exuberant-looking Bowie in pose. The wall behind it displays projections of the man in various states of performance throughout the decades.  A second book of condolences is stage right with another queue soberly taking it all in. German and foreign press scurry about with phones and equipment and with the record blaring it oddly feels like waiting for a gig to begin.

Bowie was Berlin’s adopted son and he, being Bowie, adopted the city in turn. He sang its praises as a sanctuary from conservative seventies England and the tabloid nonsense that went with it. He hoovered up the decadent lifestyle it had to offer and wrote three fantastic albums in the process. He lamented the crude divisive wall that split its people and forever immortalised those who lost their lives attempting to scale it. In fact, the German Foreign Office tweeted thanks to their fallen ‘hero’ for ‘helping to bring down the wall’. A tad romantic? Maybe. But the Londoner never forgot his foster city and regularly returned there to perform, even after it lost its fashionability. His performances in the West could be heard in East Berlin, whether tuning in to American radio or by getting dangerously close to the Wall for a better listen. Bowie sang about freedom on the other side.

One of the first places I visited upon moving here was Hauptstraße 155, Bowie’s old address in the Schöneberg district.  Back then it was a hub of bars and restaurants with a young population. Those people are still there as are, most likely, their grown-up children. It’s a quieter neighbourhood now with the odd Turkish late-shop (Späti), supermarkets and laundrettes. There was nothing for me to see then at that address except an ornate doorway and courtyard like thousands of others in the city, but I knew some cool songs had been written somewhere up there and Pop and Bowie had stumbled in and out of that doorway many’s a night. I didn’t make it down the evening his death was announced to the world. Nine days later I am somewhat apprehensive that there will be nothing much to be seen again. Instead, I am met with a ceremonial site of what must be thousands of flowers, offerings, thank you notes, poems and drawings. The only space outside the once inconspicuous doorway is to allow the current tenants in and out of the house. The clumps of snow balancing atop this religious site make it all the more serene. A homeless man shuffles past and chirps, ‘Hallo Dav-eed! Guten Abend!’, as if to a good friend. There has already been much debate about how the city should memorialise their favourite adopted son. Something tells me this doorway will never be the same again.