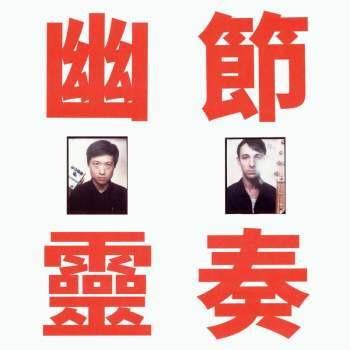 Gong Gong Gong are a two piece Beijing underground proposition, the duo of Tom Ng (Guitar, Vocals) and Joshua Frank (Bass, Vocals) cite their influences as ranging from Bo Diddley to Cantonese opera (not a genre I am familiar with), desert blues, drone and general electronic squall.

‘Phantom Rhythm’ is their debut album and follows the ‘Siren’ 7” via Brooklyn based Wharf Cat Records, that release brought them enough attention to justify a tour of the UK and Europe alongside Brooklyn based Bodega.

Despite the lack of a clear drum beat ‘Phantom Rhythm’ is a compelling, yet unsettling listen. Opener ‘The Last Note’ is a case in point, the lyric, sung in Cantonese, for me almost took on the appropriation of instrumentation, as it punctuated the abrasive psych tinged patterns, whilst ‘Notes Underground’ is built around a chugging almost krautrock striking guitar.

‘Ride Your Horse’ is stripped down to the twin guitars, each jarring against each other to provide a discordant platform for a melodic lyric, ahead of a cranked-up flourish of noise.

Gong Gong Gong are drawing upon every genre; ‘Moonshadows has a jazz flavoured guitar before the bass suddenly replicates the instantly recognisable opening to Grandmaster Flash ‘White Lines’.

The song structures are gloriously messed up – within a more traditional rock band setting, with the addition of a drummer these tracks would at times resemble The Velvet Underground; what I’m getting at is that within the angular, taut and downright claustrophobic pieces there are the bare essentials of a fine band; rhythm, melody and a determination to craft your own material.

‘Gong Gong Gong Blues’ as the title indicates veers towards a blues pattern, albeit a seriously contorted one, whilst ‘Wei Wei Wei’ defies genre as it pulls from Cantonese opera before colliding with distorted guitar.

‘Phantom Rhythm’ is an album of detailed, very dark twisted music; serrated guitar provides texture as opposed to musical tone – it’s certainly an uneasy, and uncompromising listen, though beneath the clanging guitar shards there are periods of progressive conformity that draw you in.