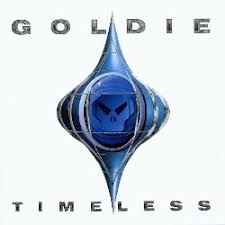 not affected by the passage of time or changes in fashion.

The brass neck (or gold teeth) to name your debut album Timeless. Not just a singular word but a statement. A blast of confidence. An author so sure of the work that he seals it with a name that threatens mocking and criticism. You can hear them now “who does this guy think he is? Timeless? We’ll be the judge of that”…Time stretch forward to the 31st July 2020 and here it stands. Timeless. Untouchable. Unique and iconic. The brass neck indeed.

Looking back at Goldie’s Timeless now it feels impossible to comprehend that it could be anything other than a huge success. It also feels like Timeless is not a moment caught in time but a fluid statement that has as much to say about the situation we find ourselves in now as it did in 1995 for here we have the work of someone who should not have succeeded. The British system isn’t geared towards people of mixed heritage growing up in the care system actually breaking out and breaking free…and for them to become one of the leading artists of the time and to be influencing a flood of youth? Oh no that surely wouldn’t do for the tie twisters and violence dispensers put in place through surname privilege, there to stamp the boot on anyone wanting to show original thought and maximum drive. Goldie burnt them all and did so with a smiling mouth full of gold teeth to boot. With our current inept taskmasters patting each other on the backs for a ‘job well done’ as thousands die and those in the BAME community suffering the most NOW is the time for Timeless. Its voice is loud and beautiful.

What’s the secret to Timeless’ success? Why did it crossover? Of course in 1995 you had a blurring of tastes with more and more people experimenting with their listening habits. Music fans were as happy absorbing the sounds of House as they were the Hip-Hop Blues of Portishead and the cockroach drama stories of Pulp. Yet for all the cross-pollination that was occurring Jungle and its heir Drum n Bass seemed to still be on the outside. If you went to a decent size indoor rave like the ones in Milton Keynes’ Sanctuary you would find the Jungle room off to a side somewhere all dark and full of smoke whilst the main room was filled with the sounds of Happy Hardcore or Techno from the likes of Scorpio and Clarkee. Drum n Bass was unwelcoming in sound but full of love in delivery. It was rapid, harsh and scattered with the proud lineage of Jazz and Ragga pulsing through its veins. It could terrify or thrill you depending on your life outlook and if you got it then you were married for life. Yet for all this here we have an album that smashes down any doors in its way dragging a whole scene out in to the light and the truth of the matter is this is all down to Goldie, Rob Playford, Dianne Charlemagne, Dego and Marc Marc creating a work that at its heart is a soul record. The decision to make the album surround like it is bathed in light and not cooked up in dark basements helps give listeners a sense of being welcomed in to a world many may never have explored before.

Timeless may be Goldie’s vision but it is important to remember that there is a great sense of collective endeavor that runs through the album with Moving Shadow’s Rob Playford and 4hero’s Dego and Marc Marc all contributing, however, it is the voice of singer Dianne Charlemagne (who sadly passed away in 2015) that takes the album from the street to the heavens. In a week when we’ve lost the singer Denise Johnson, it is vital we acknowledge the part that women (and in particular Black women) played in helping take underground club culture into the mainstream. It is their voices that allowed life and heart to permeate the sometimes harsh and synthetic electronic music (something the writer Fergal Kinney wrote brilliantly about in his tribute to Johnson for The Guardian). In such a male dominated industry and at a time when the awful “lad culture” was seemingly everywhere it is not just the vocals of your Gallagher’s or Ryder’s or Gillespie’s that stand out. In fact it is the voices of Denise Johnson, Rowetta, Martina Topley-Bird, Caron Wheeler that you think of. These voices were not dressing or side-show, they are the true centre of the music and when it comes to Timeless Dianne and the music create a marriage that connects the album to a lineage of Billy Holiday and Nina Simone with Goldie himself telling FACT in 2015 that:

“The vocal aspects in electronic/dance music were always a little bit non-existent for me. I wanted to implement vocals more as a soulful element because of the soul aspect of the 1980s. Using the voice as more of an instrument than within conventional song structures. Diane Charlemagne, god rest her soul, was someone who brought these soulful influences from the 1980s”

Which brings us on to…..

Goldie’s upbringing has been well documented and he would get intensely into it himself on Mother from Timeless’ follow up Saturnz Return but knowing what we know now we can see that even on Timeless he was allowing us a peak inside his soul. You can hear it on Timeless’ opening suite of the same name and the iconic track Inner City Life. At the time you could have read the song as Dianne singing about a distant love or broken relationship yet revisiting it now 25 years later and realise that Goldie and Dianne could easily be singing about his relationship with his mother and his upbringing. Just look at the lyrics:

“Come to me / In those open arms is where I wanna be / Livin’ free/ I need to be / I need to be your love”
That second line about needing to be in the open arms of someone strikes a chord when you think back at the feeling of being hugged by a parent and especially a mother. Doesn’t matter how old you get that feeling remains and during this time of lockdown and connection via the coldness of a laptop / phone screen that feeling becomes more vital to you so imagine what it was like living in the brutal care system. Inner City Life sounds like a man exposing his inner child and just begging to be set free of the inner trauma he was holding on to. Dianne Charlemagne acts as a partner and conduit much like the way Martina Topley-Bird did for Tricky on Maxinquaye. This is a theme that runs throughout the record peaking with Sea of Tears which for this writer is the true centrepiece of the whole album as it begins in a claustrophobic slow march before the fluttering jazz lines and Dianne’s vocals help transform the piece in to something else entirely. Sea of Tears is one of Goldie’s finest moments and through its running time you can hear the sound of Drum n Bass stepping out of a side-room and proudly standing centre stage.
The final piece in the whys and the hows when it comes to Timeless’ success is the structuring of the whole album. Timeless contains a few tracks that were made before they were set to be part of a full album but it never feels like a clutch of 12″ stuck together which is what a lot of electronica albums did at the time with only a few artists managing to make the transition from singles to album successfully. Timeless doesn’t shout on arrival, it slinks in. It breathes deeply and slowly with Dianne announcing the album’s title with stunning pitch and tone before she makes her voice part of the music itself, wordless and meaningful. When Goldie then allows the breakbeats to appear it is not done in a way to beat the listener into submission, in fact it is done in stages with each few sections having tiny layers added (the mark of a great graffiti artist) bit by bit. This isn’t hedonism it is dance music with heart and a sense of melancholy that will run through every corner of the record. Timeless shifts gears exactly when it should with channel phasing and Goldie’s time stretching techniques adding a psychedelic aspect to the listening experience. Timeless travels at its own pace and refuses to rush, do tricks to impress, or cater to the masses. You can remove it from any genre label as it flows just like you Dark Side of the Moon or your OK Computer. Timeless is an album in the purest sense of the word and is designed for a front to back listen (although you can certainly pull plenty of its tracks off and play on their own..something I wish more radio DJs would do instead of just relying on Inner City Life all the time). There were other electronic artists making albums that sounded like complete artists statements (Underworld, The Prodigy, Boards of Canada) but the only album that truly matches Timeless’ marriage of city grit and a lonely melancholia is Burial’s 2007 classic Untrue which again uses female voices to help elevate the music’s already powerful emotional punch.
The legacy of Timeless is all around and its relevance remains potent with Goldie himself revisiting the work with the Heritage Orchestra showcasing the albums intricate orchestration and its capacity to still illicit surprise. Drum n Bass is now global and there are many pivotal releases in the genre, many of which Goldie himself championed via his iconic label Metalheadz, but Timeless is where that wave of change truly started to break upon the shore. Timeless may be 25 years old yet it still sounds like it is from the future. Timeless is for then and for now so cling on it and celebrate the birthday of a truly iconic work.
~
Goldie can be found at his website: goldie.co.uk and on Facebook Twitter @MRGOLDIE and Instagram @mrgoldie
All words by Simon Tucker. More writing by Simon on Louder Than War can be found at his author’s archive. You can also find Simon on twitter as @simontucker1979.