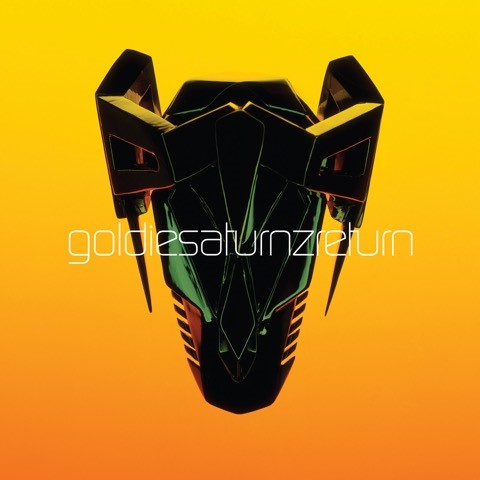 Goldie’s complicated follow up to Timeless gets the deluxe reissue treatment. Featuring the likes of Noel Gallagher, David Bowie & KRS-One, Saturnz Return took people by surprise on its release. Simon Tucker looks back to see if the album is more complicated than what appears on the surface.

When Lennon howls through the primal scream classic Mother people acknowledge what a brutal but beautiful slice of honest rock music it is. In fact, you can hold that whole first John Lennon / Plastic Ono Band album up as a revered work. The moment Lennon shook off the ghosts of his mop-top past and made a solid statement piece. Art-rock indeed.

Fast forward twenty-eight years and another artist with deep personal scars is about to release his own primal scream onto the world. He knows this isn’t what people are going to expect (or even want) but he has to do it. Fueled by gak and self-belief, Goldie is about to bear his soul to the world….and the world wasn’t ready for it.

This year marks the 21st birthday of Goldie’s Saturnz Return. London Records have given it the bells and whistles treatment with remixes (more of which later) and remastered tracks. Revisiting the album now it is quite frankly astonishing that an actual studio allowed this tobe  released as it was. Dark ambient pieces featuring David Bowie on a track that was neither Bowie nor Goldie…overblown thrash ugliness with Noel on Temper Temper…and an opening one-hour long piece that saw its creator addressing the demons of his past. Care homes and foster homes…physical and sexual abuse..abandonment..all of this gets funneled into a bold statement piece not unlike a certain Mr Lennon did twenty-plus years ago. The only difference being between the two is that the Plastic Ono Band album at least existed in the same sonic post code as its creators previous works..Saturnz Return did not. You see this is not a drum ‘n’ bass album. Yes it is anchored in that fast evolving genre and its heritage is Rage and Metalheadz..but this is something new entirely. This reissue enables you to listen back with fresh ears and whilst the album is quite fractured and incoherent in places you now fully understand why.

Saturnz Return feels like just as an important document of late 90s Britain as your Be Here Now’s or Blur’s self-titled 1997 album. It shares that sensation of a the party being over and the psychosis kicking in. Britain was suffering the mother of all comedowns and Saturnz Return is a core part of the soundtrack. Listen to the way words are whispered in your ears on Believe as the ever brilliant Diane Charlemagne sings all full of soul and broken beauty. The fact you are hearing multiple voices highlights the schizophrenic nature of the whole album and is something that is repeated throughout. Fury, one of only a few tracks on the album you could really call D ‘n’ B, also highlights the multiple personality aspect with beautiful strings appearing just when you really need an escape from the slightly disturbing main body of the track. The most obvious example (on the second side of the album) of the fraying mind of Goldie is the aforementioned Temper Temper featuring Noel Gallagher. The entire track screams of gak overindulgence and feels like a snotty little cousin to Aphex Twin’s supreme Come To Daddy.

At the time of its release a lot of attention was focused on the hour-long side A track ‘Mother’. The whole piece confused people but when you listen to Saturnz Return now 21 years later you realise that Mother is it. Mother is what the whole focus of the album should have been. Side B would have served fine broken up into EPs or released as 12″ singles. Mother is the heart and soul of the entire album and it deserves to be held up as one of Goldie’s finest moments. Mother may not have the hooks and the structure that helped catapult Timeless into the mainstream but it is as every bit as moving and as vital as anything on that debut. Mother is brave and bold and now with the benefit of hindsight you can really see that this was a cry for help and for healing.

As is the norm when it comes to reissues, Saturnz Return 21st Anniversary Edition’ comes with a slew of extras. Of the remixes it is Djrum’s take on Crystal Clear (all slow, deep strut and swagger) and Martyn’s spin on Demonz that really stand out but this is one of those rare reissues where all the remixes are worth your time with plenty of variety for you to pick and choose your favorites from. There is even the string section from Mother isolated for you to listen to which is an incredibly moving experience.

Saturnz Return isn’t perfect. It isn’t the album many wanted and it is certainly not mainstream. Not only does it fully represent the collective breakdown that was happening in the UK at that very moment but it is also the sound of someone taking things to the brink of their talent and their sanity. Saturnz Return is an album its creator needed to make and whilst it can be a harrowing listen in parts knowing what we now know about Goldie’s past it is good that is getting a second life as it is an album that represents the end of one chapter in Goldie’s life and the start of another. You get the sense that Goldie is only here today thanks to him making his first steps to recovery with this album. It may have take a few years but he is here with us now full of yogic spirit and for that, and for Saturnz Return, we should be grateful.