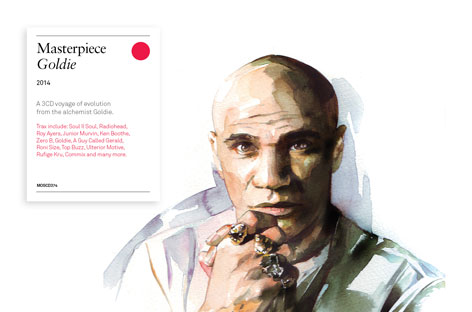 The latest edition of Ministry of Sound’s “influences and inspirations” Masterpiece series has been curated by legendary UK Drum & Bass / Jungle producer Goldie. And to quote from Simon Tucker’s review, it “… really does show off his knowledge of great music, whilst also revealing a lot about himself in the process.”

For the latest in their continually impressive, ‘Masterpiece’ series (a concept where they select a DJ/Producer to curate three discs of music which represent all facets of their personality, their influences, and their  inspirations) Ministry of Sound have selected graffiti artist, label head, actor, producer, composer, and drum and bass icon Goldie. Following such iconic figures as Giles Peterson, David Rodigan, Andrew Weatherall, and his own peers and heroes Fabio and Grooverider could prove quite a daunting task for many but with such deep rooted artistry and love of all genres of music, Goldie has stepped into the  breach and delivered one of, if not THE, compilation of the year so far.

The three discs are entitled: The Alpha, which comprises of songs that influenced a young Goldie and some songs released around the time of his ascent to stardom which he obviously connected with, Journeyman which takes the listener on a journey through the early days of Acid-House and Jungle, and finally Headzville, which is a focus on artists signed to his own, now legendary label, Metalheadz.

The Alpha starts with Goldie’s own instrumental My Little India before mixing into the minimal soul classic Lazarus Man which serves as an instant signpost to the listener that this may not just be a collection of songs that Goldie likes but also ones that represent a part of his psyche and of his want to let us into how he sees his past and current self (himself, like the self-confessed Lazarus Man, has risen again and again whether it be risen from a broken childhood or resurrecting a career that threatened to stall and be mired by celebrity TV shows). The fact that so many songs can be applied to the man curating this music is a brave and inspired move. We get Radiohead’s ‘Just’ with its “you do it to yourself you do, and that’s what really hurts” chorus a sign to the well documented self-destructive nature of the younger Goldie, whilst Smokey Robinson & The Miracles ‘Tears of A Clown’ is a perfect metaphor for the man that was notoriously upbeat and manic in life, portraying the Goldie persona to the public, whilst suffering from depression and childhood demons privately.  Junior Marvin’s classic ‘Police & Thieves’ also get’s an airing and whilst it is possible to see this as just a nod to his heritage it could also be seen as statement about the different areas he grew up and even when he moved to the United States in the mid-eighties.  Other choices in here reveal pieces of the jicqsaw that would form Goldie’s musical palette in later life including the proto House cut ‘You Don’t Know’ by Serious Intention, or the glossy soul band Maze & Frankie Beverly’s ‘Twighlight’ who’s high-end production values Goldie would incorporate into his own songs. The most important selection on this disc however is Soul II Soul’s ‘Back To Life (However Do You Want Me) This song was the first time a young, Black British group had created their own scene, artwork, sounds, visual identity, and label and actually got to NUMBER ONE in the UK charts. This must have had such a galvanising effect on many Black and mixed heritage British people who could see that it was possible to do your own thing and not adopt any Americanisms or lazy stereotypes and still succeed. This would continue to happen in the UK and was none so more evident than in the dance, and in particular, Jungle / Drum and Bass movement.

Journeyman starts off flying with Top Buzz’s ‘Living In Darkness’, all bounce and trumpet stabs before mixing  into the classic ‘Lock Up’ by Zero B but here the well trodden road ends as Goldie sidesteps the obvious pitfalls that many people making these compilations fall into. This is not NOW THAT’S WHAT I CALL Blah Blah Blah, this is a collection that dives into the relatively more obscure (to many who are not entrenched in the music of the time) and if the song choices surprise you then you really should do some research on the man curating the compilation. So instead of A Guy Called Gerald’s ‘Voodoo Ray’ we get their murky, twisted ‘Like A Drug’ and instead of a song like ‘Pacific State’ (a classic in its on right but an obvious and easy choice for many) we are blessed with the inclusion of the jump-up classic ‘Pedro Pulls An Essex Sort’ by Nookie. The listener is also treated the early rumblings of Jungle by Goldie peers such as Roni Size (It’s A Jazz Thing) Krust (Soul In Motion) and Internal Affairs (In My Soul). The set climaxes with two of Goldie’s own early and seminal songs, ‘Sea Of Tears’ and ‘Kemistry’ but before we move onto the last disc we have to talk about the centrepiece of this mix and that is the one-two smash of Egyptian Empire’s ‘The Horn Track’ and Wax Doctor’s ‘A New Direction’ . This combination of tunes is as good as you will ever here with the former being an absolute monster of a tune that is in turn thoroughly exhilarating yet utterly terrifying. Imagine if Public Enemy, Jeff Mills, Eno, and The Prodigy got together and created one dance track to end all dance tracks…..it’s THAT good and this writer was so extremely grateful to be reminded of its gloriously beautiful carnage.

Headzille closes proceedings and what a way it is to finish. As stated earlier, these are all songs from artists on the Metalheadz label and not only show just how diverse and exciting Drum and Bass can be, it also serves as a reminder of just how good a label Metalheadz actually is. Not just a dance music label but a label PERIOD. It can proudly sit alongside those often mentioned Indie labels such as Factory, Rough Trade, Creation or Cherry Red. Its quality deserves to be acknowledged outside of the electronic music press as it has outlived many other labels and has never failed to deliver anything but quality. What it shares with the aforementioned labels is a sense of experimentation, diversity, quality control, and a general sense of a shared DNA that carries through every release so whilst each song can be wildly different from the next there still seems to be, something, in its blood that makes it feel like a natural member of the Metalheadz family. Take the opening two tracks, dBridge’s soulful and emotional minimalistic ‘Inner Disbelief’ and Commix’s ‘Be True’ which whilst sharing a soulful vocal is much more of a roller and a tune more indebted to Dub.  Goldie then takes us through World Music infused ‘Universe’ by Marcus Intalex & ST Files before sending you downwards into the metallic underground feel of Ruffige Kru’s ‘Special Request’ which morphs and shakes you leaving a queasy but smiling mess.

The rest of the mix carries on in this fashion with Goldie pulling off his usual, and masterful trick of creating a set that goes from anthemic to minimal, rolling to head-nodding (for further proof of how to construct a perfect DJ set see his Fabriclive mix).  The highpoint of this mix is Ulterior Motive’s ‘Given Contact’ and Marcus Intalex’s ‘Hell To Pay’ which is where the set really does reach its darkest point with the latter an industrial music infused journey into the parts of the soul that many people would not like to look at.

The Ministry of Sound have again chosen wisely here with Goldie creating a compilation that really does show off his knowledge of great music whilst also revealing a lot about himself in the process. It is a compilation that should excite existing fans whilst drawing new ones into his world.  Masterpiece shows us that the Alchemist really does create gold.

All words by Simon Tucker, you can read more from Simon by visiting his Louder Than War Author’s Archive.