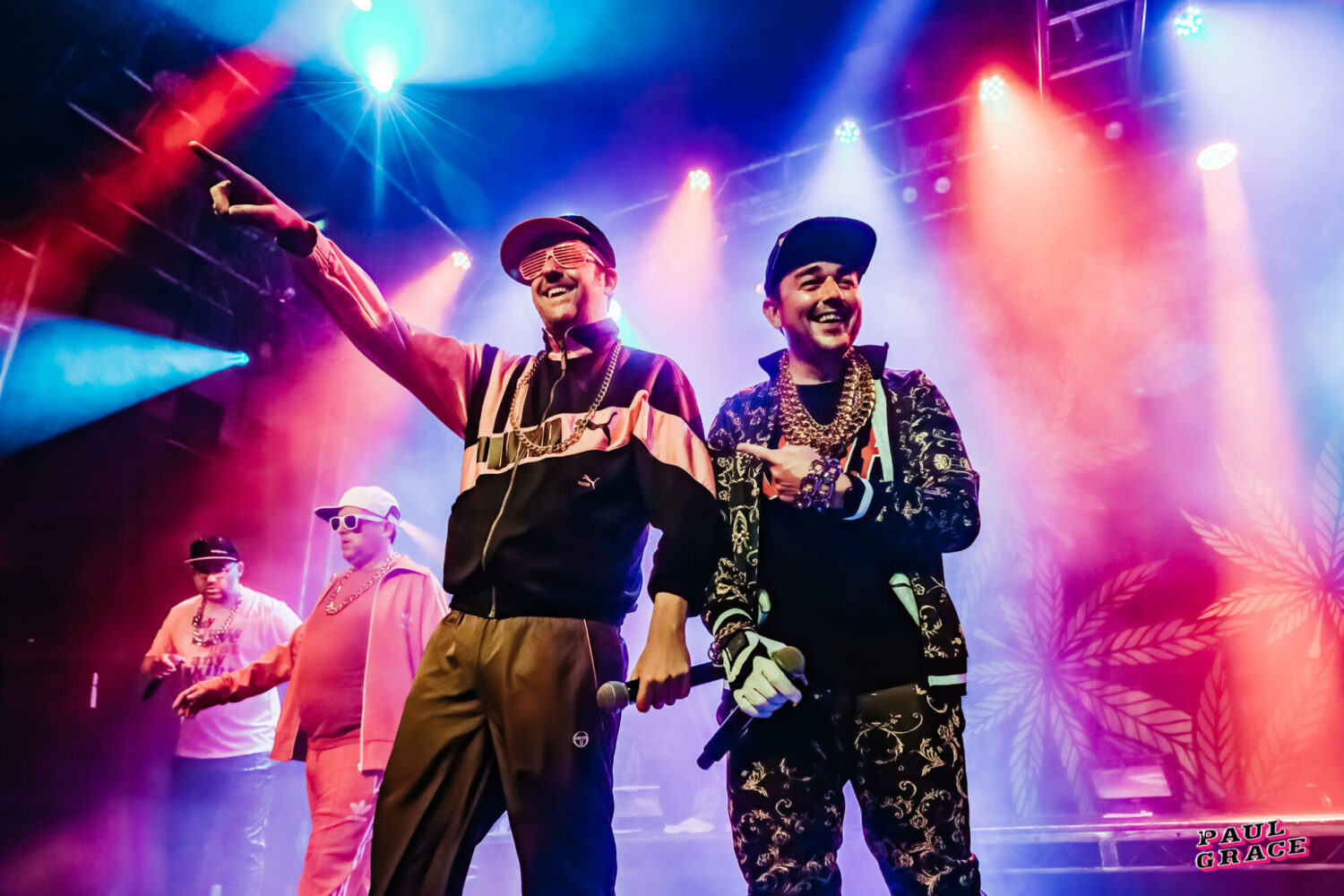 Coming Straight Outta Lockdown Newport’s legendary spoof hip-hoppers, Goldie Lookin Chain, were supported by Blacklisted MC to deliver jokes and jams a-plenty at the London show of their 20-year anniversary tour.  Alice Monty (words) and Paul Grace (photos) were there to check them out.

Blacklisted MC is first up. The London-based rapper charges onto the stage, exuding some serious serial killer vibes in a blood-spattered white suit and tie combo. This look is embellished with a pair of special earrings, randomly blinking every colour of the rainbow. Within a few minutes of appearing Blacklisted MC begins to draw in a curious crowd. Pausing only to crack open a beer or three and a few jokes, the crowd is encouraged to get in the Saturday night party mood, as Blacklisted MC proclaims, ‘we sound better when you’re drunk!’ The set proceeds with some absurdly dark-humoured original tracks including Dick Don’t Work and Diana’s Car. The lyrics might be a bit much for the general listener, but Blacklisted MC’s energy and gags make for an engaging and entertaining warm-up act, as the giddy crowd thickens in anticipation of the headliners, Goldie Lookin Chain. 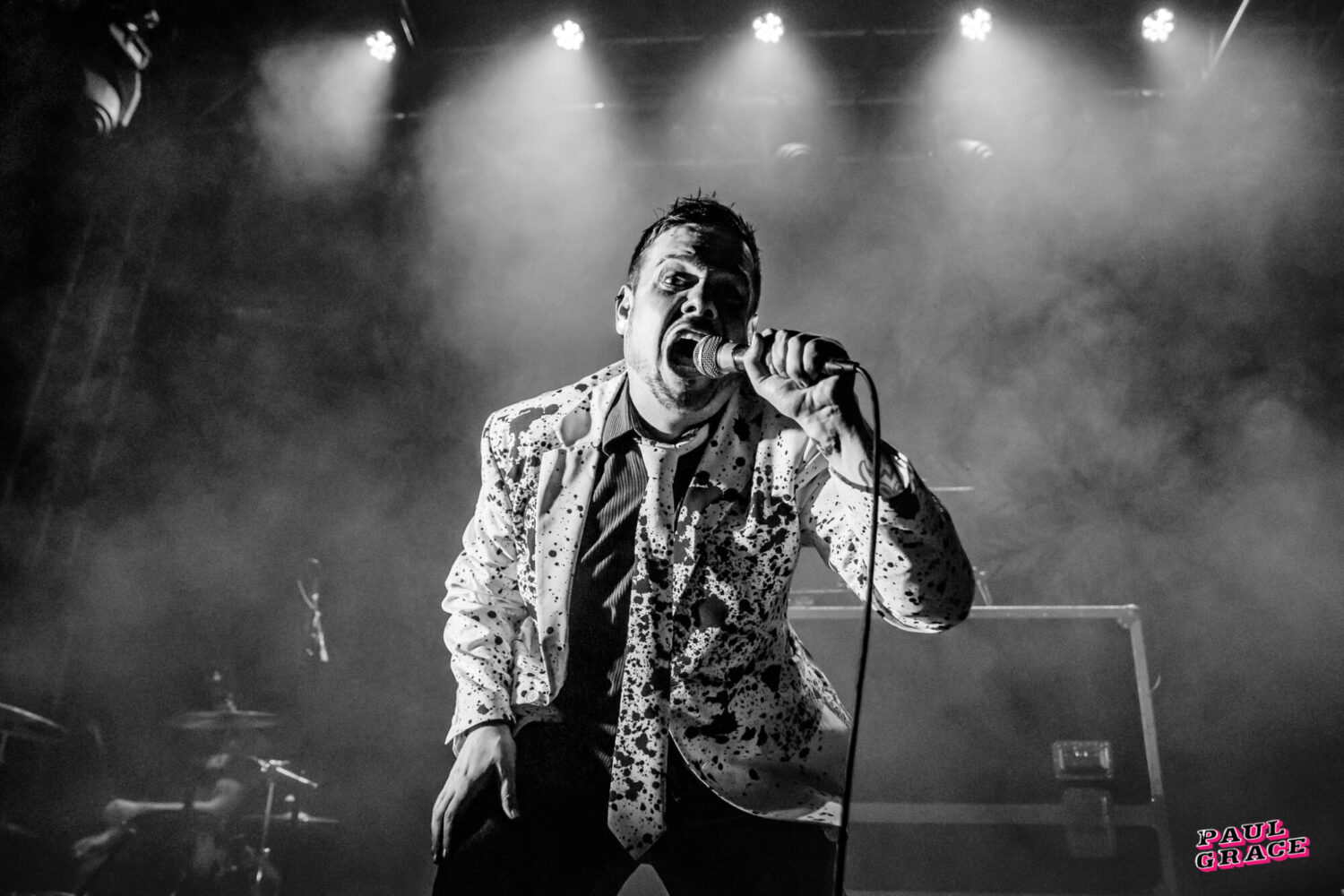 As Goldie Lookin Chain – or the GLC (as they repeatedly like to call themselves) – pour out onto the stage it is awash with shutter shades, trackie-bottom-tucked Slazenger sport socks and of course, enormous gleaming neck-bling. As Newport’s legendary satirical hip hop posse begin to bound back and forth across the full depth and breadth of the stage, it takes me a few tries to arrive at a final headcount of seven band members for this evening’s performance. The crowd are hyped as the GLC launch straight into their fitting new intro, Straight Outta Lockdown.

Next up is their inaugural UK chart hit, Half Man Half Machine. This souped-up version has the room bopping along as it plays to the recurring backdrop of Robot Rock by Daft Punk. Several members of the band take the opportunity to showcase some robotic dance moves as others take on the vocals of this weird and wonderful tale of a tinfoil-clad cyber stoner on his mission to buy cigarettes. 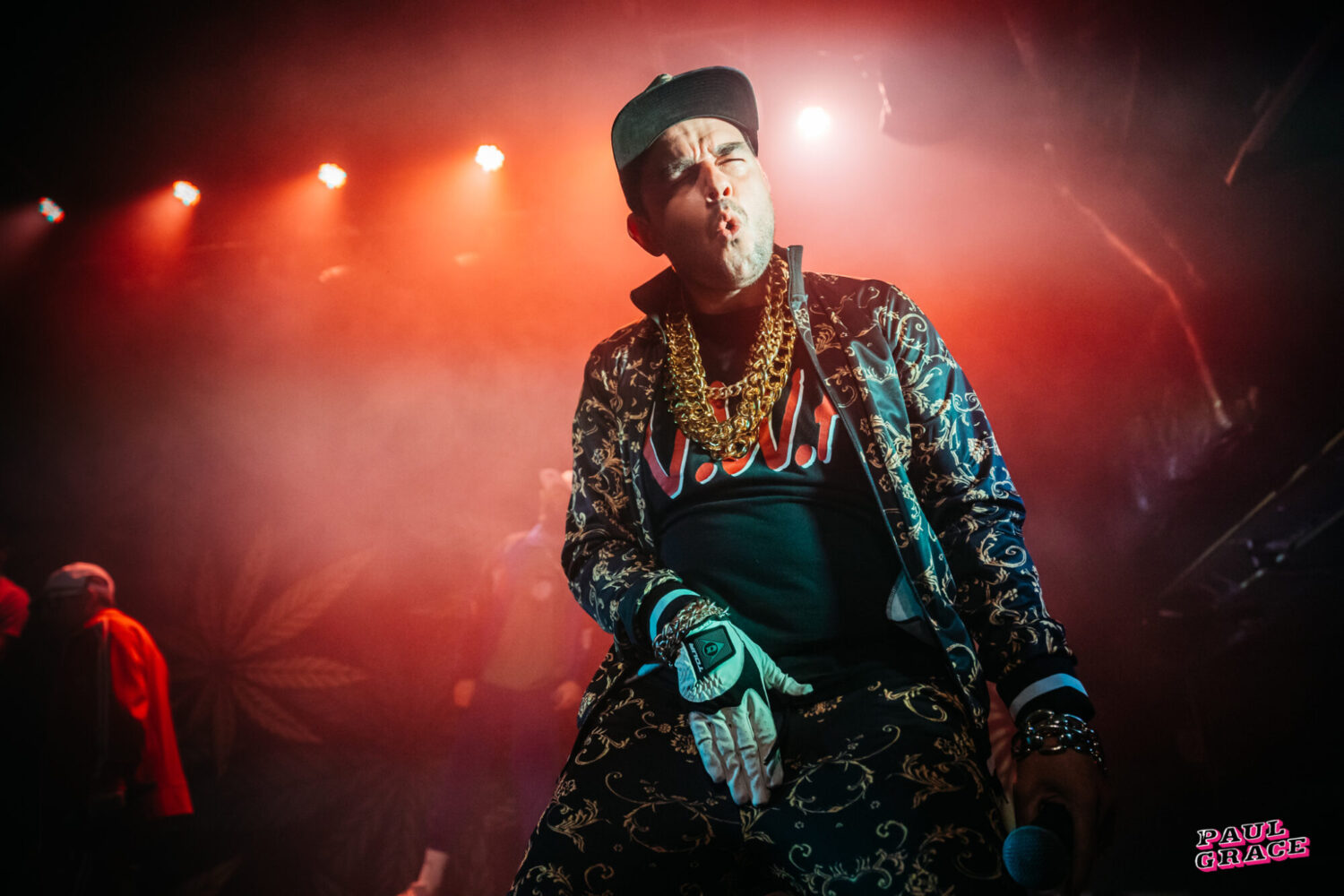 With this being the 20-year anniversary tour for the GLC and it being only a month since the O2 Academy Islington has re-opened its doors due to the pandemic, there is a real sense that everyone at this gig is up for a much-needed laugh.

The GLC take little time to pause as we are hurled back into to the noughties with tracks such as Bad Boy Limp (2005), Chain Gang (2002) and 21 Ounces (2002). Even though there are seven of them, I do feel like each one gets fair airtime – even if that airtime involves more dancing than rapping – there are no back-benchers. Somewhere amongst these GLC originals, the band, led by an impressive performance by Eggsy (John Rutledge) also managed to nail a cover of RUN DMC’s Walk this Way. 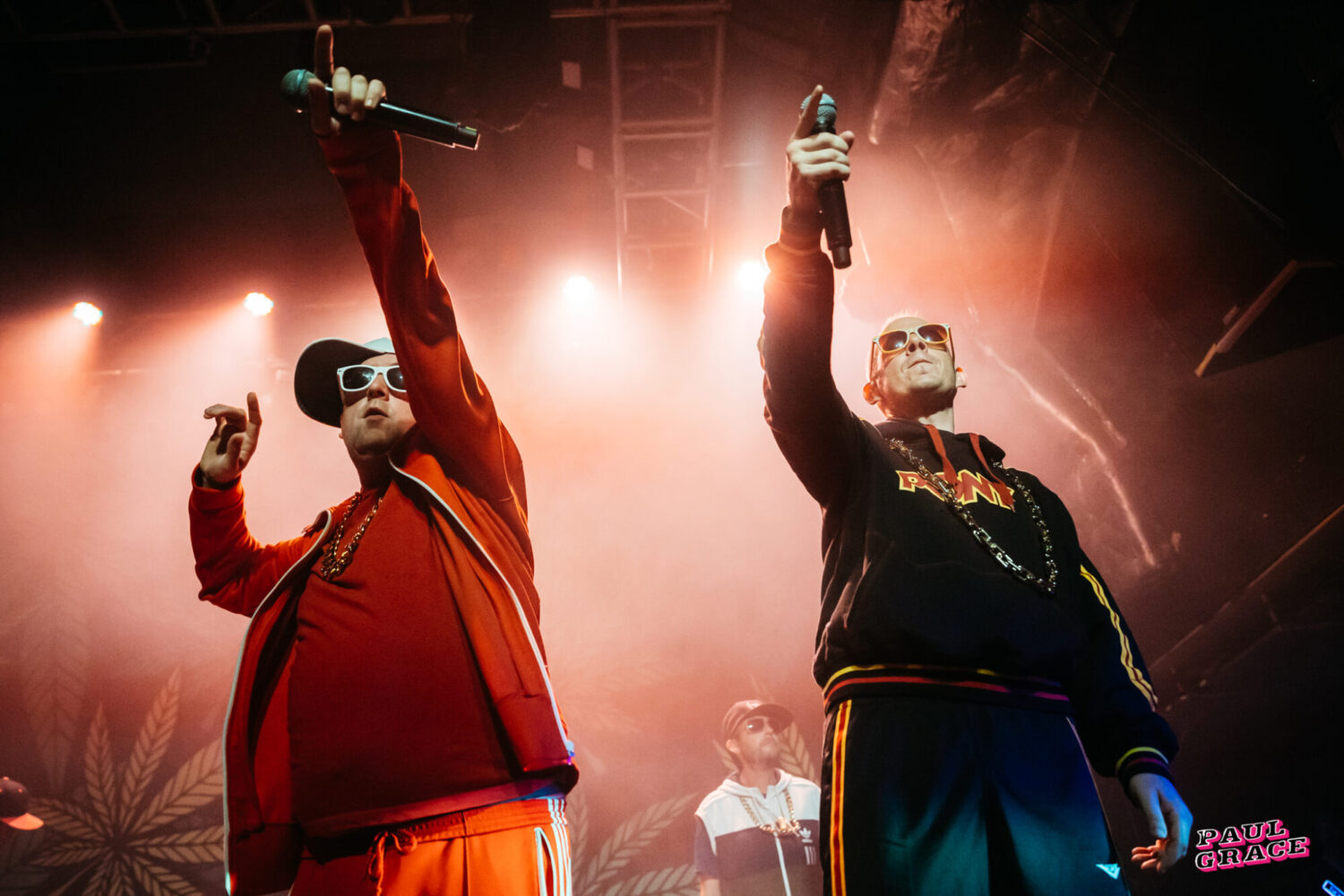 The group’s catchy and toe-tapping 2017 number I Got a Van’ comes next. It may be a less well-known track but it is one I like more that I listen to it and (as with many GLC songs), I would encourage you to look up the lyrics if you are not familiar and have a penchant for being tickled by the more magnificently mundane things in life.

More audible amusement from the crowd as the next tune, Your Misses is a Nutter is introduced by P.Xain (former Newport City Labour councillor, Rhys Hutchings) as a ‘love song’. This track, which has previously got the boys in a bit of controversy over an incident with the Beckhams, seems particularly epic tonight as for a rare moment during the slower-paced chorus, all seven band members stopped hurtling around the space to stand (almost) still at the front of the stage for a sing-a-long with the audience.

The standing still does not last very long however, as the GLC go on to play Soapbar (2003) and my personal favourite, Baneswell Express (2013) – their overzealous tribute to a very ordinary off-licence in South Wales.

I think the majority of my peers would remember the GLC most (fondly?) for bursting into the mainstream pop world and the UK Top Ten Singles Chart in 2004 with, Guns Don’t Kill People, Rappers Do. I imagine the boys have probably performed this song over a million times to date, yet their delivery felt minty fresh tonight – complete with loud enthusiasm and unbridled dance moves from all members. Every chorus is topped off by a very excitable ‘WOO WOO WOO’ as the whole room joins in for the sound of the police. 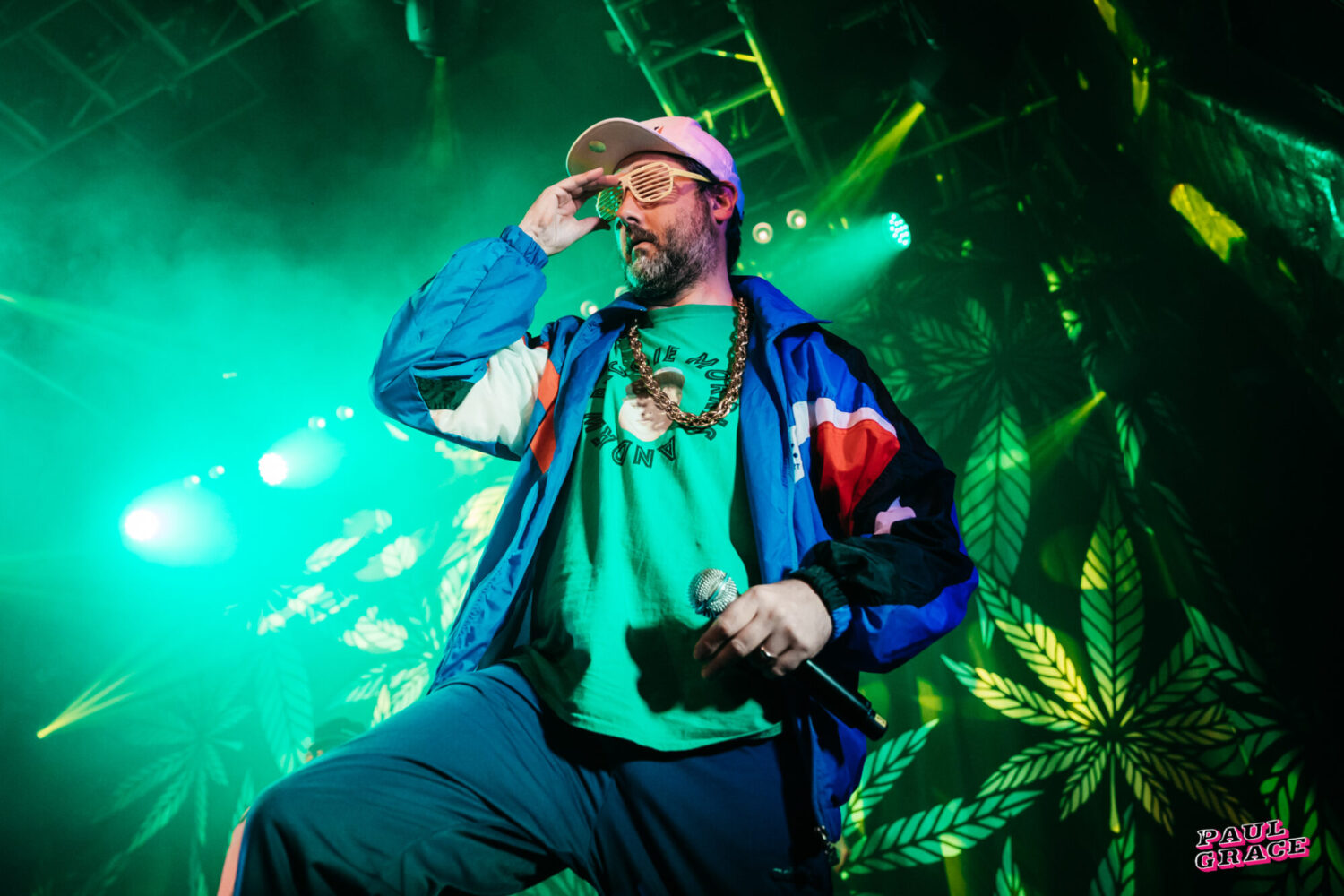 Garage-esque This One Goes Out To The Ravers switches up the tempo and gets the crowd bopping along more rapidly. Then the pace is slowed right down for Newport State of Mind (You’re not from Newport), the parody-of-a-parody song. This track is reported to be a response to MJ Delaney’s viral music video of a similar name in 2010 (intended as a parody of Jay-Z and Alicia Keys’ Empire State of Mind (New York)). In the eyes of the GLC, the original parody inauthentically depicted their hallowed hometown. Whatever the history of the song and the beef that it caused, it goes down a treat with the crowd.

Before the last song, The GLC request a selfie with their very obliging audience (I easily spotted myself grinning like a buffoon on the GLCs Instagram post the next day). The venue is not packed out as I look around the room, but in our peculiar post-lockdown world, it is a real joy to see such a mixed crowd out-out and ready for an evening of jokey jams. In fact, looking around the room at the assortment of shellsuits, metal band tees and M&S brogues, I convinced that you would not always be able to pick a ‘typical’ Goldie Lookin Chain fan from a line-up.

With the selfie completed, we get treated to the delightfully obscene Your Mother’s Got a Penis with all members of Goldie Lookin Chain giving it their all to end what has been an amusing and fun-filled night.

All words by Alice Monty. More writing by Alice on Louder Than War can be found at her author’s archive.