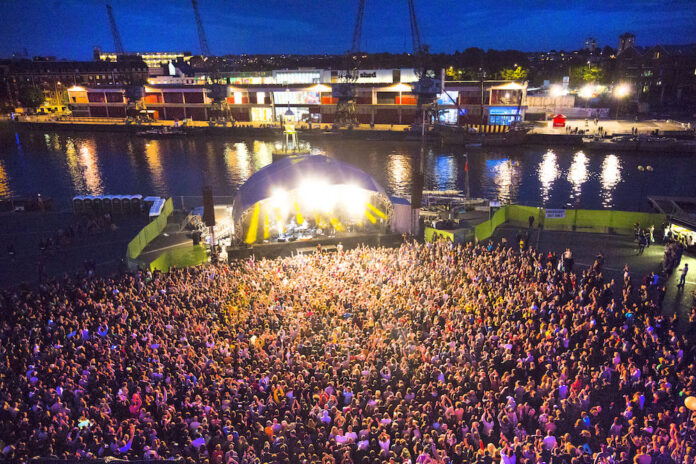 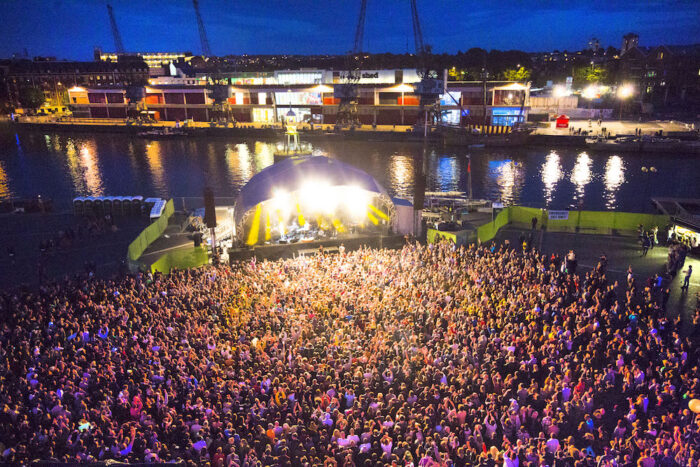 Goldie brings his seminal, genre defining album Timeless back to Bristol with a full orchestra, blowing the inter-generational audience – and the heavens, who respectfully reserved their unremitting downpours for both the day before and the day after – away. Simon Tucker reports back, with photos © paulbox.

Timeless … think about that title for a while. Imagine the sheer belief in its creator to call his debut album that. In a time when the genre of electronic music he was making, newly christened Drum and Bass, was at its nascent stage, to create a full length album (the first real one of its kind) and to have the courage to give it such a grand title, not for one second believing that it was anything BUT timeless, shows a sense of ambition and of courage in its author rarely seen these days. Yes, there have been those that spew out proclamations of their greatness in the press and more often than not these statements are made by people whose career soon nosedives or whose influence never matches their own inflated ideas of self-worth. The same cannot be said about the album we are rejoicing in today on this gloriously sunny Saturday afternoon in Bristol, nor can it be said about the man behind the project. 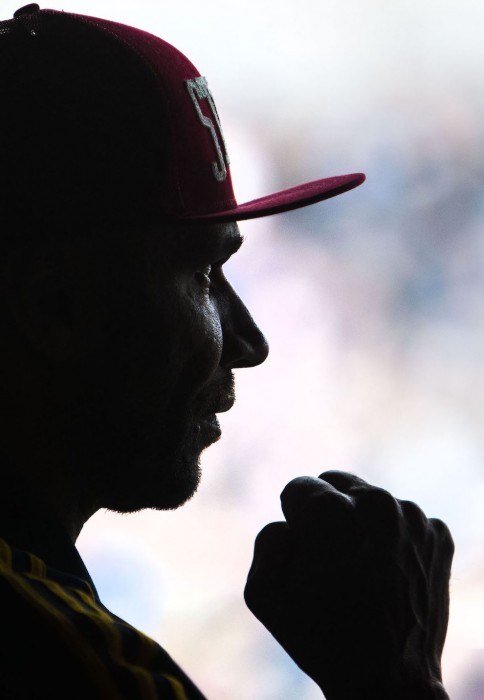 Timeless was and still remains a pivotal moment in UK culture. It is not just a genre piece where only fans of a certain style of music rate, it is a piece of art that resonates with anyone who likes sonically adventurous works that smashes genres together to create something new. Jazz, Soul, Hip-Hop, and the Blues are all in there making the album an encyclopedic journey through to the past and into the future. Twenty years on and it STILL sounds ahead of its time making it, well, timeless.

Proof of the enduring nature of this album is visible all around as there are a large number of families present. At one point a child as young as five was seen wearing an adult sized Metalheadz t-shirt, dancing to the music emitting from the stage as his dad looked on proudly. Parents who were there to celebrate a part of their youth were seen dancing side by side with their children who were visibly loving every second of what they were hearing and seeing (when the show finished the children behind us were the ones shouting for “one more” as their parents smiled approvingly).

So with the crowd all prepped and ready, on they come. The Heritage Orchestra take their places, Goldie himself acknowledges the crowd and gives us a brief summation of what went into creating the original album, and then we’re off, thrown into Sea Of Tears the darkly atmospheric track that lays at the center of Timeless and instantly you understand what this is and more importantly what this is not. This is NOT an “album in its entirety” performance, there just to make money for its creator. This is NOT nostalgia. This is the now and the future. A symphonic trip inside the heart and soul of its author.

Musically there is not a single thing that jars or seems out of place. The strings swirl beautifully around the amphitheatre, brass instruments punch and groove, synths stab and add the gritty electronics and the percussion … jeez that percussion, the twin drummers of Adam Betts and Mack Bleese are, quite simply, as good as it gets. Powering through the complicated twists in time signatures and mastering Goldie’s original beats, the duo are the driving force behind the entire performance, snapping hard when needed and riding sensitively during the more ambient sections. 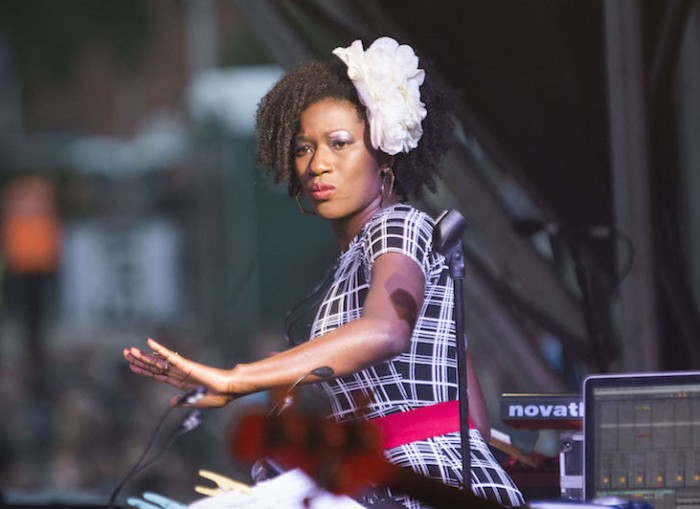 On vocal duties was Vanessa Haynes whose voice had the perfect blend of soul, passion, and warmth making the words her own, which is no mean feat considering the fact that she was having to contend with the weight of expectancy that comes with performing songs that are so ingrained in the audiences heart and soul. Vanessa exuded stage presence and when she was on she made for a captivating performer.

Whilst every song was greeted with mass approval it was, inevitably, the title track that got the biggest response. An anthem then and now, Timeless’s words and sounds are as pertinent today as they were then and whilst the Inner City Life section is the most well known it is the Jah and Pressure parts of the suite that have the most impact tonight. It is these sections where the sub-bass truly comes alive and thumps you in the chest and it is on these sections where the intricacies of the music are exposed with sci-fi glitches and textures creeping through the audiences’ ears.

Emotionally, this is a heavy mix of outward joy and internal remembrance as we are not only celebrating an album and its impact but also the people who were influential in its creation which includes famed DJ Randall and, before the track itself, Kemistry  (named after the sadly departed Kemi Olusanya who Goldie sends a beautiful message to before launching into the track). 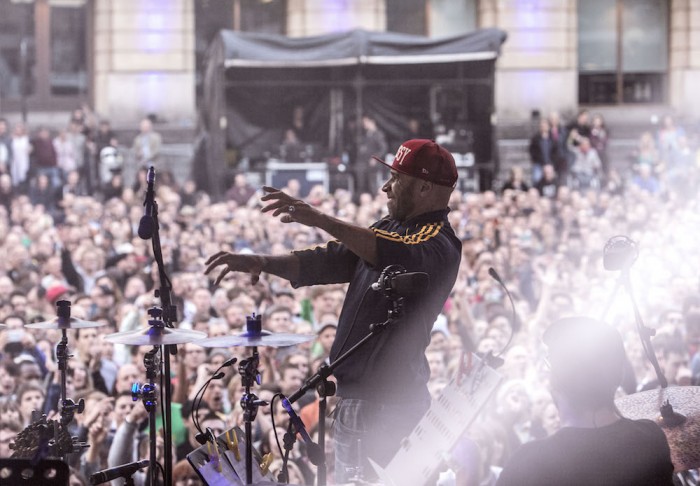 So what about the man himself? Goldie tonight prowls the stage sporadically, sometimes stepping up for vocal duties but mostly acting like a shamanic force demanding his troops follow him on this journey. Whilst not actually conducting in an official manner (that honour went to the mercurial, equally as boundary pushing Charles Hazlewood, clearly as thrilled to be here as the rest of us) there is no doubt in anyone’s mind who is driving this performance along. You see him exorcising every single demon from within with his actions fluctuating from the intense (normally when he was face to face with the drummers) to the serene, to the funny (he obviously loved the section where he discussed Randall and their early days together). For a man who is now a committed yogi and who has obviously changed a large part of his lifestyle, there is no diminishing the fire in the man’s belly. He lives every moment tonight, leaving nothing within purging his soul and enjoying every single second of the music that is confronting him head on. An obvious music lover you can tell that he adores working with the Heritage Orchestra and is truly in awe of what they are doing with his work.

This is one of those concerts which many will hold close to their hearts for the rest of their lives. We witnessed a truly wonderful performance where urban met the classical to devastating affect. Many will look back at this moment with justification of what they have been proclaiming all along, that dance culture was and remains a pivotal force. There will be children growing older who will be bragging to their friends in years to come how they “were there” and how cool their parents were. They will go on to make their own music to represent their culture and will take Timeless as their benchmark for quality. If this performance serves as a sense of inspiration to some young person locked in a bedroom creating music but sometimes doubting if it is worth it, then Goldie’s job has been done. For us who were there from the beginning and can still remember the first time they heard it, today represented vindication. What we believed back then was correct, electronic music was, and remains, a driving force for change.

With thanks to paulbox for all photos. For more of Paul’s work hit up the framedogs website: framedogs.com/paul-box.