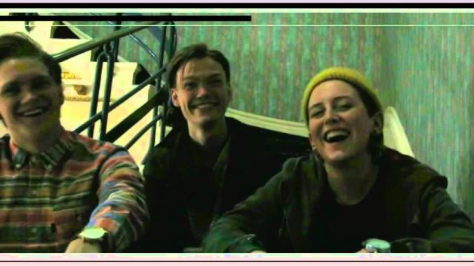 Today the focus is on Icelandic electronic band Vök.

I’d heard this Icelandic band about a week before the (Alternative) Great Escape in Brighton. The same day I interviewed Mile Me Deaf (Episode Five) and YipiOK (Episode Three). I wasn’t sure if I’d filmed enough to use to be honest as it wasn’t my intention to include this band until I heard the EP and realised that this band deserve to be seen and heard whilst they’re still appearing in small venues here in the UK.

This is another band I’ve seen a second time now and did manage to have a quick chat with Andri Már the saxophone player before they played at Birthdays, a tiny venue here in East London.

Hopefully they’ll conquer the UK eventually in the same way they seem to be winning over the rest of Europe. Photo’s appearing on their facebook page during the summer in front of hundreds of wide eyed music lovers indicates that we’ve been fortunate seeing these in smaller intimate rooms this year.

Their name rhymes with Bjork and you can find them on Facebook if you wish, right here, or on the twits as @vokmusic