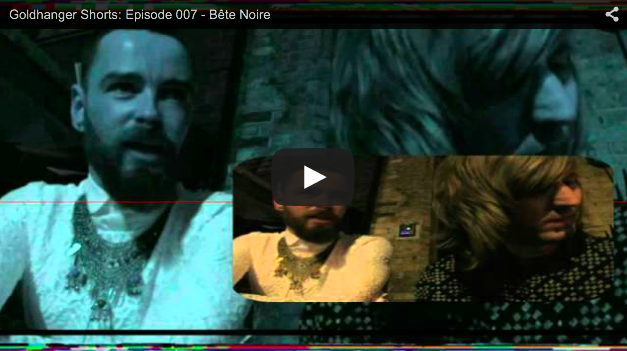 Today the focus is on London band Bête Noire.

The first time I saw this band was in a tiny bar In Stoke Newington, East London.
It was barely 9PM during a school night and singer David was standing in the middle of the room surrounded by wild smiles from the punters lucky to be in attendance, arms in the air, head raised high, long black dress and every verse and chorus as gripping and entertaining as the next.

Previous shows have ranged from the sparsely attended to the rammed tight that we witnessed inside East London’s Old Blue Last when they performed what is to me the best show Bete Noire have done since I’ve been turning up and giving them grief about wanting them in this series of films.

The footage at the Lock Tavern in Camden Town North London was the first time I’d taken the camera out and it took a few weeks before I could capture them again in Hoxton Square one evening and find somewhere to sit them down for a chat.

Whereas most people are keen to compare this band to stuff we’ve been hearing over the past decade, what I love about this band more (well, apart from the fact that they’re “All from fucin’ Bromley”) is that they remind me of the bands we used to go and see in the 80’s.

So where are today’s goths then?

All those miserable looking kids spending their pocket money on Sunday afternoons in Camden market on Alien Sex Fiend / Siouxsie and The Banshee memorabilia?

This is the first decent goth band I’ve seen for years and such as it is with the goths of 2015 … they’re never around when you’d like them to be.