Keith Goldhanger, in association with Louder Than War, presents another episode of his exclusive video-documentary series “Goldhanger Shorts”(more info here). Today the focus is on Brighton Duo AK/DK.

History (Ok then, a Google search and an old YouTube clip)  has taught us that September 13th 2013 was the first time I’d set eyes and ears on this Duo. Numerous shows in tiny bars followed and on arriving in Manchester at the tail end of 2015 my sights were on nabbing these for an interview in order to include on one of these films.

They found me before I could find them and arrangements were made to meet under a car park sign at a designated time to have a chat. This gig in Manchester closed the first day of the annual ‘Carefully Planned Festival’ – another one of those events where we crawl around a certain part of a certain city, flash our wristbands and go all day without eating whilst listening and watching bands we either forget about within an hour or sit at home a few days later with their music on repeat.

The man who arranged for my attendance that weekend was a likeable chap named Mathew who I finally got to meet at the end of the AK/DK show but this was not before he strolled past the band as I was filming in his grey hooded top about seven minutes in.

AK/DK are based in Brighton and deserve your attention. 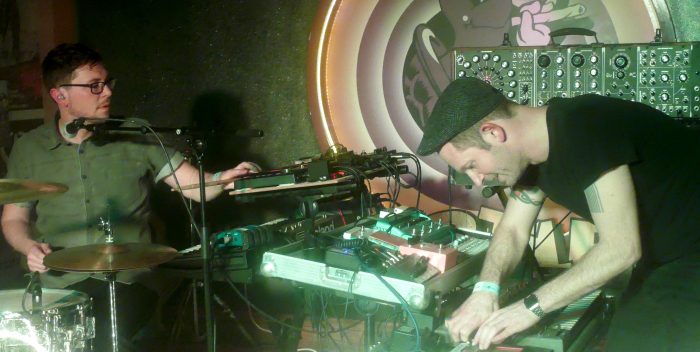