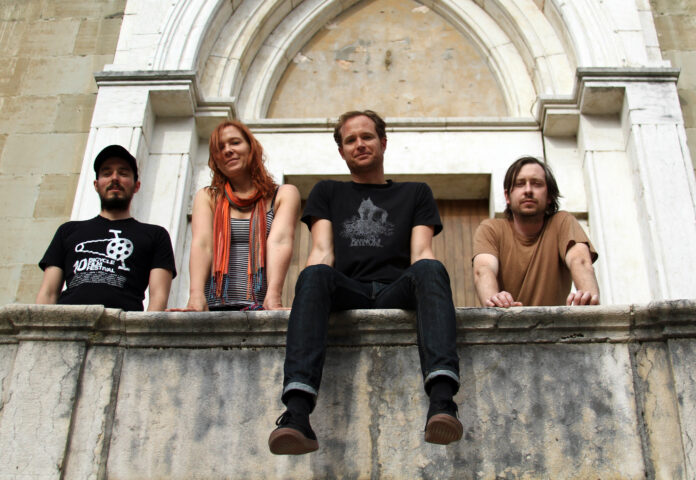 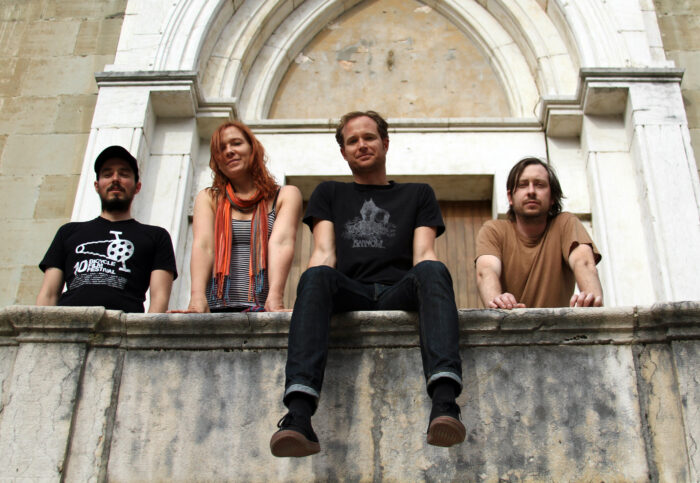 Bay area psych-blues-prog rock supergroup Golden Void today announce the release of their second album, “Berkana”, due out on 18th September via the irrepressible Thrill Jockey. The band is lead by Isaiah Mitchell, best known as a member of the influential and instrumental psych rock trio Earthless, who spoke to us about the album below.

The new album sounds great, centred around Isaiah Mitchell’s firestorm of psychedelic riffs and backed up by a taut rhythm section and some soaring keyboard work by Camilla Saufley-Mitchell which results in a complex, multi-layered sound, very much of today but also soaked in the history of all the best guitar bands.

Before you jump in with the interview, thought, we encourage you to check out this totally boss live video of the band performing Rise to the Out of Reach” / “Smiling Raven” from back in 2013, especially relevant as it appears there’s a good chance the band will be headed over to these shores before the year’s out – for the first time!

Louder Than War: By my calculations (and a quick google, as I never trust my calculations) this is the first Golden Void output for about two years. What have you all been up to in that time?

So when did you start writing the new album?

We started slowly compiling material for the record a year before we went into the studio. We move kinda slow at times so having a recording deadline from the record label helps us get to work.

And how was the process of writing the new album – did it come together quite easily? I know you’re all involved in writing it, can’t be easy getting together with all your other commitments I guess!

Justin brought the bulk of material in, I added a couple of songs and we all had a hand in arranging them to their final form. Everything came together pretty easy. There were a few songs that weren’t finished once we got to the studio so our pal and engineer Tim Green helped us finalize those songs. It wasn’t too painful a process.

Your music has quite a “retro” feel to it, I think, centred around a psych-rock axis with a bit of blues-rock stoner-rock and classic rock thrown in. Firstly, do you agree that your sound is quite retro and secondly (I’m assuming you’re going to agree to the firstly here!) is it intentional and why?

I think it’s retro sounding because a lot of the music we listen to is older than we are. So naturally you tend to sound like what inspired you. Do we consciously say to ourselves “Let’s sound like Pink Floyd or Sabbath”? Absolutely not. You might as well be a cover band if that’s your attitude.

There’s also hints of “prog-rock” in there – a genre which I feel gets a bum rap. I’m assuming that’s the same in the states so why do you think that is?

I don’t know if Prog Rock gets a bum rap or not. I mean to some people yes and some people no. I can understand how some people would find it pretentious and self indulgent, but I like it. Music isn’t supposed to make everyone happy. I like that about music.

Psych-rock, on the other hand, is very much the genre of the day.

I have no idea why it’s popular in the “underground” world at the moment. It seems like it’s been this way for a while now. I’m glad it is because it’s keeping me busy.

How did your relationship with Thrill Jockey come about? Your first release together was 2012 right?

My buddy Phil Manley recorded Golden Voids 7″ for Valley King Records and he really dug the tunes. So he sent them to Bettina at Thrill Jockey and she loved it and asked if we’d want to make a record for her. Here we are on record #2.

If the band could tour with one other band, past or present, who would it be – and why?

Oh man……..hard question. We’d all have different choices but I’ll say, only since we’ve talked about it recently, that we would choose Soundgarden because they’re an amazing band and there’s some similarities in the sound. Tame Impala would be a close second choice.

What plans post release have you got – the press release I was sent suggest some heavy touring schedule? Or at least, heavy compared to what we’ve come to expect from Golden Void! Any idea who you’ll be touring with yet?

Yeah we’ll hit the road as much as we can. More than last year. No plans as of who we’ll tour with yet but hoping it’ll be with awesome bands and people.

Final question – can you recommend us some bands / artists we probably haven’t heard of before but should please? Local bands to check out or new finds.

Golden Void’s new album, Berkana, can be pre-ordered via these places…

All words by Guy Manchester. More writing by Guy can be found at his Louder Than War author’s archive. You can also find Guy on Twitter as @guid0man.