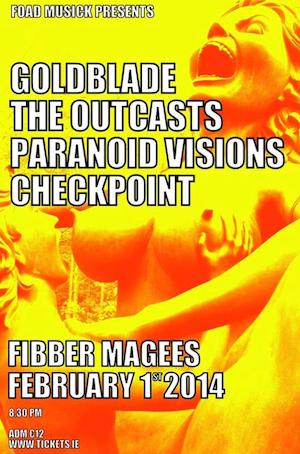 Tonight’s gig takes place at Fibber Magee’s in Dublin – a great venue with an outstanding punk line up – The Outcasts, Goldblade, Paranoid Vision and Checkpoint

Young Dublin punk band Checkpoint are first up. Leather-clad, tattered jeans and Converse, the de rigeur uniform for a certain genre of punk  – depressingly fresh -faced they look like they could have stepped on to the 100 Club stage circa 1977. But it’s not a case of style over substance for the young Dubliners, the music of that period is a source of inspiration for their unique sound with influences ranging from punk and hip hop to melodic alternative rock. Together for a while, this last year has seen them really push forward. With two EPs under their belt, a forthcoming single on the way and an ever increasing fan base, it’s uplifting to see a young band of this quality come up on the scene.

They’re up against some heavyweights but that doesn’t faze them and they bring the vigour of youth to tonight’s proceedings. With plenty of strong numbers of their own – Driven You Dead, Reasons for a Revolution and the B-side off their coming single are the highlights – it’s unfortunate that scattered throughout their set are four indulgent covers. If they fear that they’ll lose the attention of the crowd without some recognisable classics then they’re mistaken. But when front man Sean throws off the guitar and leaps around the stage and thrusts the mic stand forward for a blistering version of Shame 69’s Borstal Breakout it’s difficult to be critical. Checkpoint are always exciting live, incredibly tight, and drummer Ali puts other more senior drummers to shame.  The fact that the scene is turning out bands of this calibre bodes well for its healthy longevity.

Paranoid Visions have taken a sort of unofficial role as nurturer on the Dublin punk scene over the last few years, releasing Checkpoint’s latest EP, as well as bands such as I Am A Car Crash and Setting Off Sirens. Talk to other bands and they’ll be quick to admit there would be little or no scene was it not for the hard work of PA from Paranoid Visions. They’re the band I have probably experienced most live, yet never tired of. This has plenty to do with their consistency of performance over the last nine years (since reforming), and their ability to still impress. It’s also clear that they’ve no desire to rest on their laurels, playing on bills that enforce a healthy competitive element and a persistent upping of their game. Despite a seated and injured PA, they’re on astoundingly frenzied form tonight, playing an eclectic set with full time member Steo infusing it with a whole manner of wonderful samples, clips, and strangeness.

They kick off with the fitting onslaught of All Systems Go and their drive is relentless. It intensifies later as Sarah excels on lead with the heartbreaking and haunting Strange Girl, a compassionate tribute to the tragic death of schoolgirl Anne Lovett, the well documented Irish tragedy that’s fresh in our minds on her 30th anniversary. The anguish suffered by her is powerfully evoked by Sarah’s passionate cry, and the beautiful simplicity of the lyric: “She died in a field, She died for her baby, She died like an animal, She died for you”.

The girls leave the stage briefly, placing the focus on Deko’s mad preacher-like role within the band. The stage is his pulpit, it’s impossible to draw your eyes away and whereas later Goldblade feels unifying, Deko’s sermon is terrifying but totally captivating. Sex Kills is a powerful meditation on the reality of the sex industry and it’s even more compelling tonight juxtaposed with Strange Girl.

When?, from last year’s collaboration with Steve Ignorant, sounds gloriously menacing. Deko seems supernaturally large, hands gestured instudied performance. Combined with that uniquely authoritative vocal, there is a sermon-like quality to his delivery. With several dates already confirmed for here and the UK in 2014 (with and without Steve Ignorant) the band are currently on an unstoppably dominant rise.

Expectations are ridiculously high for Goldblade, I first saw them on the final day of the 2012 Rebellion Festival. That Sunday afternoon I was feeling the effects of a heavy few days and really didn’t know if I was going to sink or swim, but nothing could have prepared me for the shot of adrenalin I experienced from their set, like a jolt of electricity running though my body, exorcising the fatigue and allowing me to go another, final round. One of the highlights of that set was Fighting In The Dancehall from 2005’s excellent Rebel Songs, and they come out guns blazing with it tonight.

It’s pure celebratory, life-affirming stuff. We are here and we are alive. Robb’s enthusiasm as he struts across the stage and lunges forwards in animated manic glee is completely infectious.  On their excellent new album, Robb sings We’re All in it Together, and you believe him. He puts in an exhilarating performance, the stage cannot contain his boundless energy and he comes into the crowd to embrace us and to let us know that we are indeed all in it together. The energy is palpable and he jumps on tables and conjures up a bond with the crowd that inspires a sweaty kind of ritual.The camaraderie is contagious and the crowd leaps around smiling from ear to ear.

New album The Terror Of Modern Life has quite rightly been heralded as one of their best. This is War! and Psycho Takes A Holiday from it fit seamlessly with well established anthems like Strictly Hardcore. When John and co blast through an inspiring Do You Believe In The Power of Rock N’ Roll the crowd are  hands aloft, like a congregation swaying in joyous unison at the altar of Goldblade. Testify brother John! The set passes in a whirl of sweat and euphoria, and the only qualm is that they don’t play for longer.

What an impossible act to follow, but The Outcasts knew what to expect having preceded Goldblade the night before in Belfast. It’s a source of contention for many that several festivals have an abundance of older bands dominating their line ups. This is a confusing criticism considering the punk ethos – surely it’s in this arena of no rules and no confines that we can grow old disgracefully, playing and dancing to the music we love. It defeats the self-defining nature of punk too and whether The Outcasts are a living breathing entity is for the Cowan brothers to decide. For those of us who weren’t around to experience it the first time round, we embrace their prolonged return.

The Outcasts have played here three times in the last two years and it’s testimony to the quality of these performances that we keep coming back.  Despite looking a little more seasoned than the album covers they adorn, they haven’t lost any of their tenacity and Greg Cowan’s voice is in especially fine fettle. When he sings those enduring anthems of teenage rebellion, lust, love, and scrapes with the law, it’s as if the last thirty years never happened. They have all the vivaciousness of their younger selves and are in unbelievably spirited form tonight, having fun to which the crowd responds in rapturous delight. Classics such as Self Conscious Over You, The Cops Are Coming and You’re A Disease all get a blast and sound incredible.  Their excitement at being back in Dublin can be seen on their faces and it’s clear this isn’t any kind of faux crowd pandering. All in all it’s a triumphant finish to a fantastic night, the kind of gig that follows you into the week, popping into your head to cheer you up on a dreary Dublin morning.

The Outcasts have have just released a Best Of, recently toured Europe and  surprised us all by going back into the studio.  Just this week they posted great new demo versions of Magnum Force and Bowie’s Suffragette City – long may this bout of productivity last and lead to a new album!

Any of these acts is worth the admission price alone. Time and again the FOAD Musick crew make Dublin safe for music and in the spirit of punk and the D-I-Y ethos they managed to do it all tonight for a tenner.