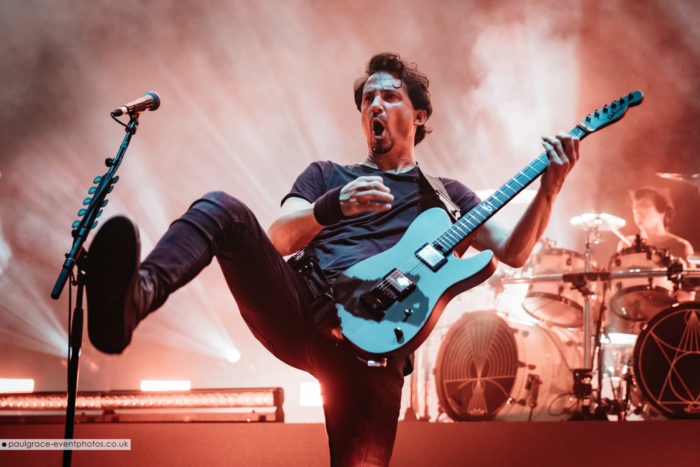 French metalheads Gojira kick open the gates to hell and seriously impress with an explosive performance in Brixton. Paul Grace risks life and limb and gets his camera scorched for Louder Than War.

I first heard of French metal band Gojira when I saw a video clip of them playing at Pol’and’Rock Festival in Poland. Under the setting sun, their performance looked more like a war scene from Lord of the Rings than a band playing a festival. The heavy sounds of impending doom accompanied by a state of the art production whipped the crowd into a frenzy the likes of which I’d never seen before. See the performance here. I was therefore stoked to see they were playing Brixton as part of a mini UK jaunt over the summer.

I arrive at the Brixton academy just as support act Rolo Tomassi launch their crazed metal blast onto the receptive crowd. Theirs is quite a unique sound featuring both metalcore screams as well as softer vocals, with suitably heavy post-hardcore soundtrack, while singer Eva Spence throws some interesting shapes on stage.

The repetitive chants of “Gojira! Gojira!” reach deafening levels until suddenly, at 9.15pm, the house lights dip and a roar welcomes the French quartet to the stage.

I’m unfortunately tucked behind a wall for the first song so am unaware of what happens on stage due to photographers not being allowed in the photo pit for health and safety reasons. The track they open with though, Oroborurs, certainly sounds like a textbook start with swirling metal guitars, thunderous percussion and a satanic vocal chant. And it’s pretty much from that moment the band have the Academy in the palms of their hand.

Us photographers are then allowed into the pit for tracks two, three and four. Before we enter however we’re warned not to get too close to the stage due to there being pyro canons which will be going off. I chuckle/mutter (muckle?) to myself, “I think you’ll find it will be CO2 canons at most –  as if they’ll let us in if there’s fire…”.

Within 10 seconds of arriving in the pit however, the front of the stage is engulfed in flames and my camera is nearly barbecued. Oof! It’s fire alright, and spectacular to boot. 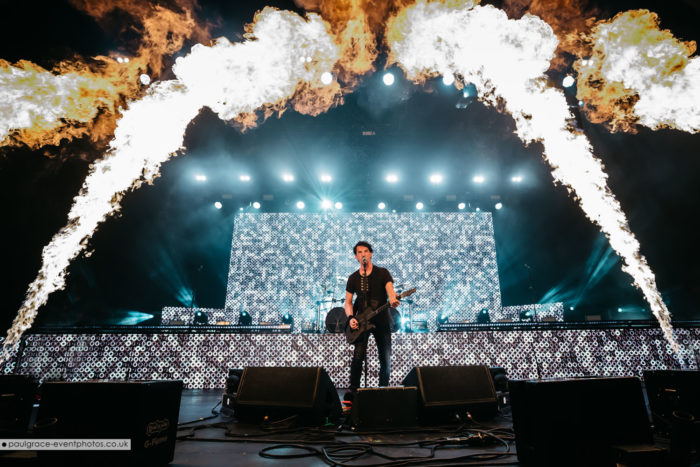 The riffs of Backbone pierce the smoke and singer Joe Duplantier screams its vocal. Pyro is, of course, plentiful, and once the track finishes Duplantier jokingly enquires, “Was that enough fire for you!?!?”. 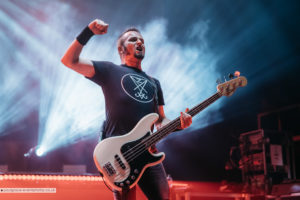 Up next, from 2016’s Magma, Stranded, is anthemic and the crowd sing along to the chorus while the band punch the air in unison.

From 2005, Flying Whales, gets the crowd surfing which gives security a right headache as scores of crazed fans pile over the barriers.

Musically tonight Gojira are extremely tight and simply explode with energy as they bounce around the stage. Their sound is a frenzied mix of classic metal, swirling progressive riffs and metalcore screams/chants, while the production throughout is stellar with endless pyro, CO2 canons, mind-mangling lights, and massive video screens displaying bizarre images. Although Duplantier is a man of very few words, Gojira still fill the Academy with a massive presence. So colossal is the vibe in fact that, at times, it feels like they’ve kicked open the gates to hell and we’re partying in Satan’s flames. And that’s a very good thing.

Towards the end of the set Duplantier apologises and explains the lights would have been better had someone not spilt their beer over the lighting controller. No one would have noticed though – the lighting was impressive and seemed flawless. 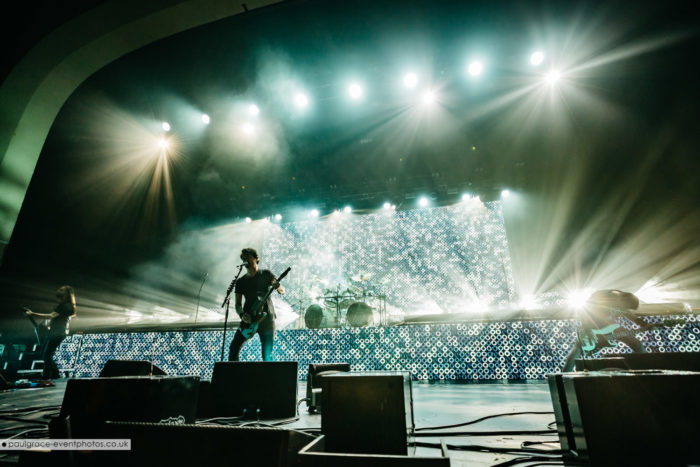 Following a three-track encore, Gojira bow out but not before sharing with us how much tonight has means to them. They seem genuinely touched at the reaction they receive and joke that next time they hit the capital they’ll be playing Wembley Arena. The joke may well be on them though, as judging by tonight’s spectacle and reaction, I genuinely believe they will easily fill Wembley the next time they hit the UK.